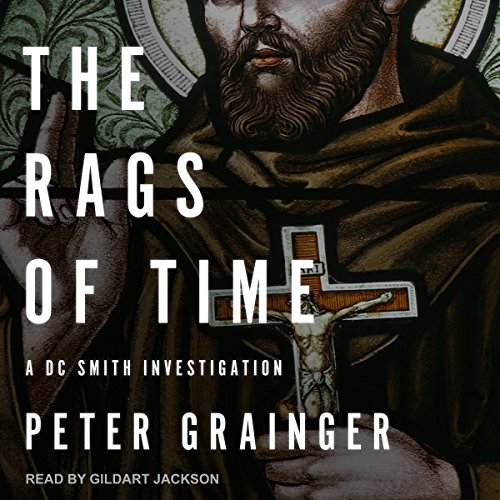 The Rags of Time

Mark Randall lay dead in a field near Lowacre long before Smith had done what he had to do in Belfast. By the time he went back to work, the investigation was well underway. "It's not my case," he says more than once, and he really doesn't need it to be; he has enough to think about as it is. But going around the Norfolk countryside dotting the i's and crossing the t's, speaking to the local farmers and the Brothers of St. Francis from Abbeyfields, Smith begins to suspect that the investigation might be heading in entirely the wrong direction. Arrests are made, charges are brought, and Christopher Waters asks Smith if he has ever seen the wrong man convicted in a murder case. The answer is yes, and the next question is, what can be done to prevent it from happening again?

I really love this series.

And I do mean LOVE. Here are all the reasons why:

Grainger has created a host of characters with depth, flaws and quirkiness - and they're consistent from book to book. The lead, DC Smith, is a brilliant character. He's an honorable man. I hold him in equal regard to Gamache. (And that's high praise if you love Louise Penny's series as I do.)

Gildart Jackson is the perfect voice. It's an absolute pleasure to hear him read.

The plotline holds my interest.

The violence happens offstage. I don't have to hear the gruesome details and have those floating around in my brain for days.

I don't care who did it - rather, I just love hearing the whole story.

I love the music references and DC's interesting choice of instrument.

I love the way the smallest details make their way from book to book.

If you're looking for a series to get into during the winter, this is it. Start with the first and just know you'll have some delightful listens. I've now listened to all of them twice just to get a little closer to understanding how Grainger writes. He's great.

This narrator is perfect

I love the D.C. Smith series, not least because Gildart Jackson is the perfect voice for David Smith. Grainger's writing is witty, literate, and clear as a ringing bell. The stories are well done and satisfying. I hope Smith never retires!

Fell in love with DC Smith!

Bought the first in the DC Smith series in a &quot;2fer&quot; promotion, and fell in love with him! That meant that I unfortunately had to buy extra credits and get the whole series! A wonderful character and well-crafted stories! &quot;Audible 20 Review Sweepstakes Entry&quot;

D.C. Smith is fabulous. His humor and intelligence are so delightful. Thank you, Peter Grainger.

The narrator, Gildart Jackson, adds a great deal to the enjoyment of this series. I could listen to him read anything.

This has quickly become one of my favorite series. This book, the sixth, involves friars, badgers, and sacrifice. And the murder of course. After DC's visit to Northern Ireland in the last book I wasn't sure what his future would be like. There are still questions so I'm hoping for more books.

Peter Grainger has become a favorite of mine; so much so that I’m giving his series sets to a couple of close friends this year for Christmas. The only bad thing about Grainger’s novels - they have to end. It’s always a sad moment once I’ve heard the last line.

And speaking of hearing, I can’t imagine these stories being narrated by anyone but Gildart Jackson. He inhabits every character and nuance of every line. He has quickly become one of my favorite narrators.

The author and the narrator are made for each other. So well written and so well read. This series is pure delight to listen to!

This series is unlike any other I have read. D.C. Smith is a detective who is probably nearing the end of his career as a police officer. He has the wisdom gained from years of experience, and a sense of humor about it all that keeps him from being cynical and bitter. I've enjoyed every book in this series.

This is a smart &quot;procedural&quot;. The pace is steady, there are many interesting characters, and a minimum of violence. There is humor that had me laughing out loud a number of times. What kept me interested was the interaction of the characters.

There is at least one more book in the series. I look forward to hearing it when it is available.

One of the very best modern detective series!

DC Smith series novels ALWAYS earn 5 stars! It is a series that makes the listener think. The Rags of Time is Book 6 in this marvelous British detective series and this is the 6th review I have written of series books. Author Peter Grainger does a fantastic job of developing Smith and the other returning characters. The plots are realistic while having excellent action and suspense. Listeners are very unlikely to determine how the stories end until they actually end.

DC Smith was past retirement age when he requested to be moved from management back to a detective job. He solves cases with brain rather than brawn.

Time and Tide, the 7th novel is this series, will be released on January 24, 2018. I highly recommend all of the novels in the DC Smith series!

I knew who did it almost immediately, which is not normally the case with Peter Grainger, but as long as the character development remains strong that doesn’t always matter. In this case, however, the interviews of the wrong suspects dragged on too long without anything else to sustain interest and, unforgivably, the resolution was prompted by an improbable report of gossip. Still, the book is still better than 90% of detective procedurals out there, and I am sad that there is only one novel in the series to go. I will miss Detective Smith’s wry humor.

Kept my interest through out. The story line was unusual. I enjoyed the detective , DC Smith however the story just focused on the detective. Everyone else was in the background. Even D C Smith seemed dull. Over all the book was a good listen.