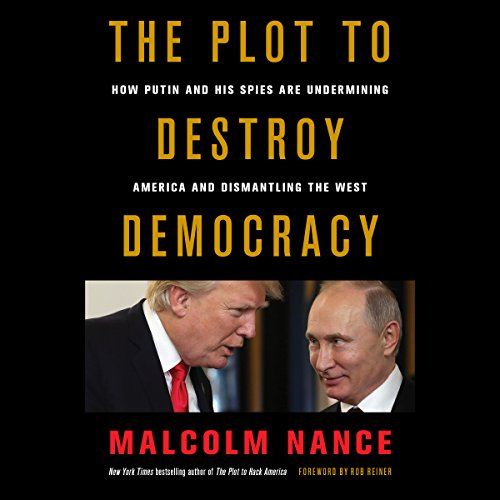 The Plot to Destroy Democracy

A provocative, comprehensive analysis of Vladimir Putin and Russia's master plan to destroy democracy in the age of Donald Trump.

In the greatest intelligence operation in the history of the world, Donald Trump was made president of the United States with the assistance of a foreign power. For the first time, The Plot to Destroy Democracy reveals the dramatic story of how blackmail, espionage, assassination, and psychological warfare were used by Vladimir Putin and his spy agencies to steal the 2016 U.S. election - and attempted to bring about the fall of NATO, the European Union, and western democracy. It will show how Russia and its fifth column allies tried to flip the cornerstones of democracy in order to re-engineer the world political order that has kept most of the world free since 1945.

Career U.S. Intelligence officer Malcolm Nance will examine how Russia has used cyber warfare, political propaganda, and manipulation of our perception of reality - and will do so again - to weaponize American news, traditional media, social media, and the workings of the internet to attack and break apart democratic institutions from within, and what we can expect to come should we fail to stop their next attack. Nance has utilized top secret Russian-sourced political and hybrid warfare strategy documents to demonstrate the master plan to undermine American institutions that has been in effect from the Cold War to the present day.

Based on original research and countless interviews with espionage experts, Nance examines how Putin's recent hacking accomplished a crucial first step for destabilizing the West for Russia, and why Putin is just the man to do it. Nance exposes how Russia has supported the campaigns of right-wing extremists throughout both the U.S. and Europe to leverage an axis of autocracy, and how Putin's agencies have worked since 2010 to bring fringe candidate Donald Trump into elections.

Revelatory, insightful, and shocking, The Plot to Destroy Democracy puts a professional spy lens on Putin's plot and unravels it play-by-play. In the end, he provides a better understanding of why Putin's efforts are a serious threat to our national security and global alliances - in much more than one election - and a blistering indictment of Putin's puppet, President Donald J. Trump.

Make sure to read this outstanding book as soon as possible, but definitely before the 2020 elections. Importantly, you will hear shocking details about things we normally take for granted. Personally, I now believe that our democracy is at more risk than I ever thought before. After reading this, I am deeply concerned about the future of our country. I'm a retired US Navy Officer, and formerly held a top secret security clearance with some knowledge of foreign intelligence operations.

a must read for any true patriot

A must read document for anyone who's trying to figure out why evangelicals, Republican Congress, NRA and Trump are working on behalf of the Russian government.

Everyone should listen to this book. Guard yourself against the disinformation attacks lead by Russia by knowing how they operate and what their goals are.

Very insightful and timely analysis of the political world we live in today well worth the investment.

Found this to be very informative. In the age of Putin invading the Ukraine and the Bloviator in Chief, Donny Trump, It is an excellent narrative of how we got here. The list of players is exhaustive, and hearing the trail of events from an inside player like McFaul is enlightening.

I read this book and thought is was good but a little bit “conspiracy theory” . Then I watched the Putin/Trump press conference! Everything he predicted would happen is starting to happen. Help!

We Need to Regain Control of Our Country

I've said since 2016, as things have gotten worse and worse, stranger and stranger, that if anyone had written a book about it in the past, I'd have thought it too unbelievable even for fiction, and wanted my money back. Sadly, this is not fiction. What keeps it from looking like another conspiracy theory is 1) The knowledge, experience, and trustworthiness of Malcolm Nance and 2) We're seeing it happen right in front of our eyes. And despite what the usurper tells us, I WILL believe what I see.

We wonder why the GOP Congress is not doing its check and balance job. The fact is that Russia set this in motion years ago. Many in the GOP have been compromised, and are therefore being complicit with Putin's agenda. I highly recommend that you read this book for the details of how this mess was brought about. It's well written and well narrated, and very informative.

We must vote in the 2018 midterms and take back Congress so we can take back our country!

This is a fantastic, important and scary book. If only 50% of it is true (and I have no reason to doubt any of it), this country is in serious trouble. It will take the will of ALL of the people to fix it.

Author spoke of our fears . I can only say I was grateful to have the opportunity to listen to this incredible book. Thank You!!

Author broke down complex facts into info I could understand. you must get this book!!!

I am former Intel Soldier from the cold War error. , Nance's writing brings back good memories of the quality Intel our IC produced on the former Soviet Union. Nance served the same time I did so he has first hand knowledge of the Russia tyrant Putin. Anyone who is an American Patriot must read this book and renew their dedication to preserving our Nation. He is an unbelievably good analyst.