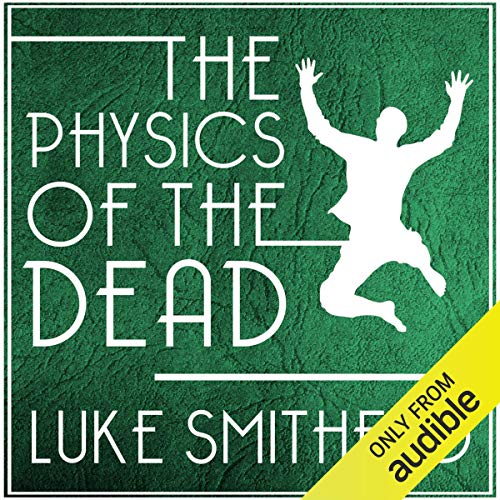 The Physics of the Dead

The Audible UK #1 bestseller from the author of The Stone Man!

What do the dead do when they can't leave...and don't know why?

The afterlife doesn't come with a manual. In fact, Hart and Bowler (two ordinary but dead men) have had to work out the rules of their new existence for themselves. It's that fact (along with being unable to leave the boundaries of their city center, unable to communicate with the other lost souls, unable to rest in case The Beast catches up with them) that makes getting out of their situation a priority. But Hart and Bowler don't know why they're there in the first place; if they ever want to leave, they will have to find all the answers to be able to understand the physics of the dead.

What are the strange, glowing objects that pass across the sky? Who are the living people surrounded by a blue glow? What are their physical limitations in that place, and have they fully explored the possibilities of what they can do?

Time is running out. Their afterlife was never supposed to be this way, and if they don't make it out soon, they're destined to end up like the others. Insane, and alone forever....

In this creepy, mysterious debut novel from the author of the Amazon and Audible number-one best seller The Stone Man, the richly-built world of The Physics of the Dead will slowly draw you in with an icy grip until you are left gasping.

I can almost guarantee there is no other book like, "Physics of the Dead". On the surface, it is a story of two men trapped in an afterlife they don't understand. Where are they? Why are they there? Most importantly, is there any chance they can get out?

Beneath that story is the true brilliance of this book. You learn about these men. You feel what they feel--bored, lost, sad, scared, and alone. They only have each other to help pass the time and how long will that be? Forever? They don't know and neither do we.

There is an incredibly written story about a train ride that will make you understand the utter desperation of these men. It may also make you ache with compassion and wince at the agony felt by the man on the train. This train ride puts you into the mind and body of the man and you will feel his pain as he tries to hold on just a little longer.

This is a story of friendship. It is also a mystery of sorts, as they try to figure out where they are and if there is any way out. There are agonizing moments in this book, but there are also beautiful, life-affirming moments that show us what it really means to be human--even if you're dead.

I highly recommend this book. It tells us there are always consequences to our actions, but, more importantly, there is always hope to change and rise above our circumstances. And, whether you are alive or dead, having a friend who understands and loves you is priceless.

This story impressed me not only with its uniqueness, but with the author's lack of dumbing down for the reader. I enjoyed that many aspects of this story were left to the reader's imagination to understand the why of it all. The ending wasn't handed to you on a silver platter. Like many great stories, you are given just enough to let your mind create the scenario you envision for the lead character(s). Lovely twists, perfect pace and heartwarming characters.

Perhaps the best thing about Luke Smitherd's books is the sheer inventiveness of each story's concept. A lot of sci-fi and fantasy are variations on a theme, fresh renditions of, say, time travel or space opera or dungeons and dragons. But Luke's stuff is always wildly original, and, he sells it (and I do not mean in the monetary sense). Try to relate the plot of one of Luke's books to a friend, and you will see a quizzical look staring back at you, but when you are immersed in these wild tales, they seem as real as everyday life. Physics of the Dead is exactly this kind of book, unlike anything I've ever seen and strangely compelling. That it is narrated by the author himself, is an added bonus not only because of the charms of his storytelling voice, but because you know you are getting exactly the nuance that was intended when the words were composed. I thoroughly enjoyed reading Physics of theDead, and couldn't wait to get back to it for each session.

very interesting fun to listen to would recommend this to anyone who wants a unique story..

A great story, if you are dead, can you die? If you are trapped in a city center, is there a way out? Finally, if you have a friend can you hold on to that friendship to keep out the insanity that is a constant threat?

Smitherd is good at setting up impossible puzzles and then showing how people react to them and solve them. This is a mystery story with an escape from an eternal prison as the mystery to be solved.

Intriguing plot and sub-plots. I enjoyed how many of the mysteries are partially solved and slow the reader to come to their own conclusion. Enjoyable twist at the end.

Luke does it again! He has such a unique voice - nothing else out there compares.

The Physics of the Dead was absolutely spellbinding. Smitherd creates characters you come to know and love, and although this book starts off more slowly than his others, it was completely worth the wait.

Although many authors should stay away from narrating their own books, Smitherd does it beautifully. He's mastered the pacing and emotion of each scene, and his production quality is top-notch. This was nine hours of my time that was very well spent and I am now going through a sad withdrawal period because it's over. :(

I was warned before I started this book that it had a bit of a slower start than those of Smitherd's other books, but "stick with it". It was true. It doesn't explode in your face right off but rather offers you a proverbial "drink" as you settle in for a great ride. As always, Smitherd's ability to develop a realistic life for his characters is simply amazing.
It's the little details that make his characters become alive!

Not only would I, I actually have. This is one of my favorites of Luke's work. It is an amazing story that ultimately gets you thinking about the incredible things we miss when we are pursuing things that really don't matter.

I liked Hart by the end, simply because I ultimately identified with him, but early on I identified with Bowler. The book really got me to thinking of how I put on a Bowler kind of persona, but really am more reserved like Hart, holding back because of the fear of taking risks.

Which character – as performed by Luke Smitherd – was your favorite?

I think he did a great job with Bowler. I loved hearing that character come alive through Luke's voice (as I actual read the book before listening to it).

Where do we go from here?

One of my very favorites of Luke's books, Not only is TPOTD an intriguing, unique concept, but Luke really does an incredible job of character development. Because of Luke's incredible dive into the intrinsic make up of each character, I was truly sad when I finished the book, as I felt I was leaving friends behind. Not only that, but the book really gets you to thinking about what matters in the grand scheme.