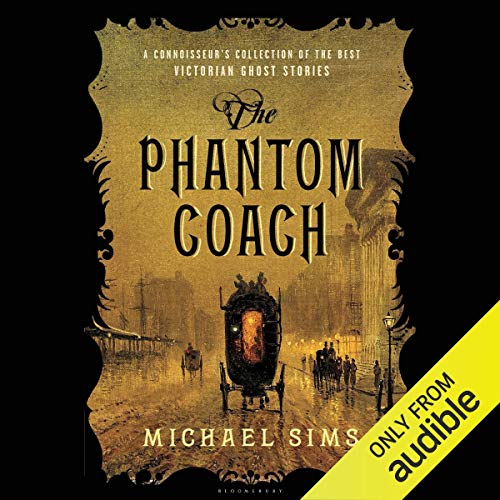 A spine-tingling new collection of the best Victorian ghost stories—as suspenseful and entertaining as anything written today.

Ghost stories date back centuries, but those written in the Victorian era have a unique atmosphere and dark beauty. Michael Sims, whose previous Victorian collections Dracula’s Guest (vampires) and The Dead Witness (detectives) have been widely praised, has gathered twelve of the best stories about humanity’s oldest supernatural obsession. The Phantom Coach includes tales by a surprising and often legendary cast, including Charles Dickens, Margaret Oliphant, Henry James, Rudyard Kipling, and Arthur Conan Doyle, as well as lost gems by forgotten masters such as Mary E. Wilkins Freeman and W. F. Harvey. Amelia B. Edwards’s chilling story gives the collection its title, while Ambrose Bierce ("The Moonlit Road"), Elizabeth Gaskell ("The Old Nurse’s Story"), and W. W. Jacobs ("The Monkey’s Paw") will turn you white as a sheet. With a skillful introduction to the genre and notes on each story by Sims, The Phantom Coach is a spectacular collection of ghostly Victorian thrills.

I was pleasantly surprised with this collection of Victorian ghost stories! Michael Sims is an excellent narrator and I enjoyed listening to his voice and various character accents. By far my favourites are The Old Nurse's Story and The Captain of the Pole-Star. Here's what you get on the audiobook:

The Old Nurse’s Story by Elizabeth Gaskell
The Phantom Coach by Amelia B. Edwards
The Trial for Murder by Charles Dickens
The Captain of the “Pole-Star” by Arthur Conan Doyle
Sir Edmund Orne by Henry James
The Yellow Sign by Robert W. Chambers
The Library Window by Margaret Oliphant
The Monkey’s Paw by W. W. Jacobs
The Southwest Chamber by Mary E. Wilkins Freeman
“They” by Rudyard Kipling
The Moonlit Road by Ambrose Bierce
August Heat by W. F. Harvey

A highly recommended audiobook for those looking for some great classic ghost stories!

The Classics That Haunt You Forever

Nobody does classic ghost stories like the Victorians. Nobody. These stories aren't necessarily scary, especially by today's standards, but they are beautifully written masterpieces by some of the greatest writers that ever dipped a pen into ink. The variety of authors and prose styles presented here is nothing less than impressive to me. I would love to see an additional anthology or two in this series just on account, because this collection just barely scratches the surface of what I know to be out there.

I love classic ghost stories but I'm always leery of collections, particularly audio collections. It always seems like the same stories are collected over and over with the only difference being the narrator. The Phantom Coach caught my attention because, to be honest, I really liked the cover. I checked out a sample of the narrator...so far so good. The Phantom Coach ended up being an excellent listening experience.

Starting the book with a very personal introduction editor Michael Sims has put together a good collection of stories in The Phantom Coach. Some of the stories I have heard before but the editor seemed to at least try to make an effort to not go straight for the expected stories from the various authors. His biographies of the authors before the stories were also very good. They were quite thorough but kept short enough so as not to weigh the bios down with unnecessary information. The information was interesting and not the usual copy/paste that you usually find in the biographies of well-known authors. One of the pieces of information regarding Margaret Oliphant I'd never heard before and made me see her life in a whole new light.

The tales included are as follows:
The Old Nurse's Story - Elizabeth Gaskell

The Phantom Coach - Amelia B. Edwards

The Trial for Murder - Charles Dickens

The Captain of the Pole-Star - Arthur Conan Doyle

The Library Window: A Story of the Seen and Unseen - Margaret Oliphant

The narrator, Matthew Waterson, does an excellent narration of the books. He catches the tones of each story very well and does not try too hard at the feminine voices. He seems to know his limits and stays within them. The stories are well-chosen for the most part and are very interesting. There are one or two that seem to end rather abruptly ('August Heat' and 'They' being the two that stand out the most) and Arthur Conan Doyle's story 'The Captain of the Pole-Star' has an unnecessary epilogue.

After all of this praise the four star rating might be a little confusing. It mostly comes down to this. The editor, while mentioning multiple female writers and speaking very highly of them, only includes four of them in this collection. In a book that contains twelve stories that seems a little light to me. Particularly when at least two of the stories, 'The Monkey's Paw' and 'The Yellow Sign' could have been replaced altogether. Don't misunderstand me, I think they are excellent stories but they have each shown up in many collections (particularly 'The Monkey's Paw') that their inclusion here is a bit superfluous. The editor mentions at least five contemporary female writers that are not as widely known as W.F. Jacobs and Robert W. Chambers. I have to question why he didn't choose one of their stories instead to give the book more balance.

All in all I would certainly recommend this audiobook and I have no doubt that the print or e-book would be just as good for a dip into some hidden (and a few not so hidden) gems of the era for some ghostly goodness.

These stories had me jumping or turning round! They were all very good and enjoyed my time with them throughly! I have my favorites of course but all are worth a listen if this genre suits you.
I especially enjoyed the brief bio of each author at the beginning of their story as I was not familiar with all of them.
The narrator was wonderful, full of emotion and handled each character as it's own person.

They say it is difficult to write short stories....true...but short scary ghost stories, believe it.
Here is an array of some of the finest "spooky" tales you will find. I scour the net for them and here is some gold....

Very disappointed with this audiobook. The Narrator doesn't read very well and ruins the experience. He's got a good voice, but he's an AWFUL reader. He pauses multiple times all throughout nearly every sentence, in all the stories. Pauses in the middle of a thought, not pauses where there might be a comma. It's almost like after every few words he had to catch his breath.

Here's an example from the 2nd story, about 1 minute in. This is one sentence, Each / is where the narrator pauses.

Prior to launching his weekly periodical /
Household words /
in the spring of 1850 /
Charles Dickens /
sought contributors whose talents might enhance his stable of authors.

Really? It makes it very hard to follow the train of thought because you keep thinking a sentence ended.

Awful experience and I will be returning this book.

Curiously bereft of... something.

The stories are well chosen and certainly represent some of the greatest of the era, but the narrator is just... I don't know, lifeless? Not exactly, but... robotic? Maybe. He's a bit stilted, with very little dynamic; his tone and energy level is essentially the same at the end of a story as it was at the beginning. The flatness of his reading makes me wonder if they just thought it would work simply because of his accent 'cred'. I'm not saying he has a bad or unpleasant voice, at all. It's his lack of emotion, his stilting precision, which bothers me. Yes, I 'get' these are Victorian tales and so maybe his stiff reading is purposeful, as so much from that era is always assumed to be somewhat dry and emotionless... but this is juuuust a bit too much. If that doesn't bother you, then by all means enjoy the hours of same-level monotony for sleeping or relaxing to otherwise classic and worthy stories.

This book is very enjoyable for what it is. The Victorian era doesn't approach scary the same way we do in the modern world. If you appreciate 19th century prose and that style of writing you will certainly enjoy this book. If you want to be scared, you should probably pass on it

I enjoyed this collection of ghost stories, some familiar and and some new to me.
However, the narrationtook a bit of getting used to. I found his voice a little momotonous, and he ran some of the words and sentences together in a rather odd, manner. It was almost as if the book were being read by an electronic reading machine!?