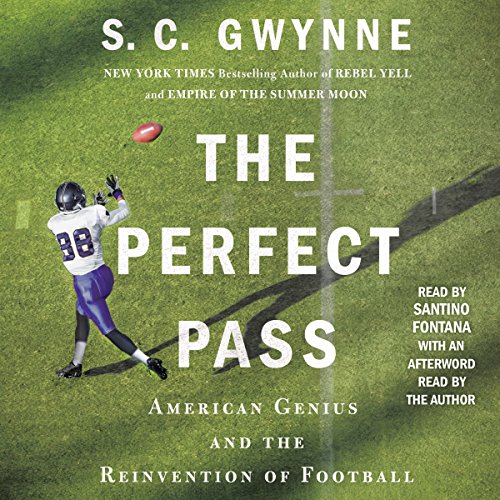 New York Times best-selling, award-winning historian S. C. Gwynne tells the incredible story of how Hal Mumme and Mike Leach - two unknown coaches who revolutionized American football in the 1980s, 1990s, and 2000s - changed the way the game is played at every level, from high school to the NFL.

Hal Mumme is one of a handful of authentic offensive geniuses in the history of American football. In 2015 ESPN Magazine, the nation's leading sports magazine, called him the single most influential football coach in the last quarter century.

Mumme spent 14 mostly losing seasons coaching football before inventing a potent passing offense strategy that would revolutionize the game. That transformation began at a tiny college called Iowa Wesleyan, where Mumme was head coach and Mike Leach his assistant. It was there that Mumme invented the purest and most extreme passing game in the 145-year history of football, where his quarterback once completed 61 of 86 passes (both national records). His teams played blazingly fast - faster than any team ever had before. They rarely punted on a fourth down and routinely beat teams with 10 or 20 times Iowa Wesleyan's students. Mumme did it all with average athletes and without even a playbook.

In The Perfect Pass, S. C. Gwynne explores Mumme's genius and the stunning performance of his teams as well as his leading role in changing football from a run-dominated sport to a pass-dominated sport. He also shares the history of a moment in American football when the game changed fundamentally and transformed itself into what tens of millions of Americans now watch on television every weekend. Whether you're a casual or ravenous football fan, this is a truly compelling story of American ingenuity and innovation and how a set of revolutionary ideas made their way into the mainstream of sports culture that we celebrate today.

Being a retired sportswriter in Texas, this book wAs amazing

An absolutely unique story of innovation, superior intelligence and guts of a guy who has revolutionized the game of football...a MUST read for any offensive minded sports fan.

No, I only ordered this because I listened to Empire of the Summer Moon and Rebel Yell twice each. SC Gwynne is one of my all time favorite authors. I thought maybe he could make this interesting. I gave it a good go but it just wasn't that interesting to me. I think football fanatics and coaches might be inspired but I was disappointed.

Probably something on WWII

Could you see The Perfect Pass being made into a movie or a TV series? Who should the stars be?

Please, Mr. Gwynne, pick another historical figure to write about. Maybe something else about Texas History or South American history and the Incas. I LOVED your other two books.

I Hate Football... but this was great.

I'm a 40 year old artist who doesn't give a flip about football. I don't like watching the sport and I don't pay any attention to collegiate or professional football despite living in football fanatic Central Ohio.

That said, I listened to this book in only a few sittings in rapt delight. It told the story, not only of a style of football play but of a man and his journey to better the thing he loved. Hal Mummy is an artist of the game of football and his passion and dedication are both interesting and admirable. I loved listening to this book and have been recommending it to other folks who can't stand football too.

Santino Fontana's narration was perfect - as usual. I listen to everything he narrates, and that was why I picked this book in the first place as it is the last thing he's narrated that I haven't listened to yet. He's done some great books - The You series by Kepnes and A selection of works by King including The Institute - but he's also done some real stinkers which I won't list to save you the hours I spent suffering through boring content to listen to the man speak. This book? Not suffering. I'm sure I will listen to it again and again because it's interesting as a work of nonfiction and this audio version is aurally delightful thanks to Fontana.

Good easy read with lots of football history, big names, and cool stories. S.C. Gwynne is one of my favorite authors check out his other stuff you won’t be let down!

Perfect Pass is for the die hard fan

If you love the game at every level, you will love this book! I grew up in Texas and Oklahoma, where I’m pretty sure there must be schools where you can’t graduate until you can diagram a reasonable offense and defense on a white board. A great story of people, programs, personality, and the life of a coach and his family. It was beautifully written and narrated, and I loved every bit of it.

The perfect pass is an interesting book that details the coaching career of Hal Mumme and some of his key assistants in their search for an offence strategy that was indefensible. Having coached primarily at sub par football schools, in almost each case he was able to make immediate and positive impacts by the utilization of his evolutionary (and simple) offensive approach. Getting rid of the playbooks with hundreds of different plays and replacing them with one that contained less than tweny, he was able to dissect defensive schemes and use their own methods against them with quick but simple reads by the quarterback. Most of his quarterbacks were at the top of the national rankings in statistics, yet with the exception of Tim Couch at Kentucky, none of them were heralded for their natural abilities such as arm strength or speed. His coaching legacy lives on in many of the current college head coaches and air raid quarterbacks. Even the SEC has evolved to incorporate many of his concepts such as the hurry up no huddle, and many of the air raid plays he designed. Juggernauts Alabama, Auburn and LSU all have implemented aspects of his offense and with his primary assistant Mike Leach now the head coach at MSU he will continue to affect how the game is played. Narration was OK, not great, sounded a little like Mr Spock discussing American football. Worth the credit.

we get to go behind the curtain with the air raid

S. C. Gwynne is a talented writer and this particular subject matter suffers from a lack of exploration. There are lots of sports stories but this is a virtually unique look behind the curtain at the development of the air raid offense .... a monumental event in football. I hated for it to be over could listen to this red another 8 hours with stories about Coach Leach Coach Mumme their passion for football and more specifically for throwing the football. This is a great sport story well told and thoroughly enjoyable. If you love football or you love history and you love great stories this one's not to be missed.

This was a fascinating character study of Hal Mumme and passing offense in football. The performance was lacking in parts, the narrator has a nice voice, but I found it distracting when he would change his voice for women.

What every football fan wants to listen to!

Incredibly well-written. Great story & character portrayal! This book informs us how the football landscape that we love today was created.

The best offenses are in the Big12, here's why.

The best football book I have ever read. I have read Empire of the Summer Moon by this author and considered it as one of my top 5 books of all time. I am of course biased as Football and History are my two life passions. In my opinion, due to the Air Raid system and its many variations, the current Big12 is the future of the game of American football. In other words, when you watch, for example, TCU and Texas Tech play, you are watching the type of game that everyone across the Nation will be playing in the years to come. This is evidenced by the growing number of Coaches and QBs going from the Big12 to the NFL. This book brilliantly tells the back story of how this all came to be. If you are a football fan, this book is a must. It's not that "they don't play defense in the Big12" as many say. Its that the offenses are just that good.