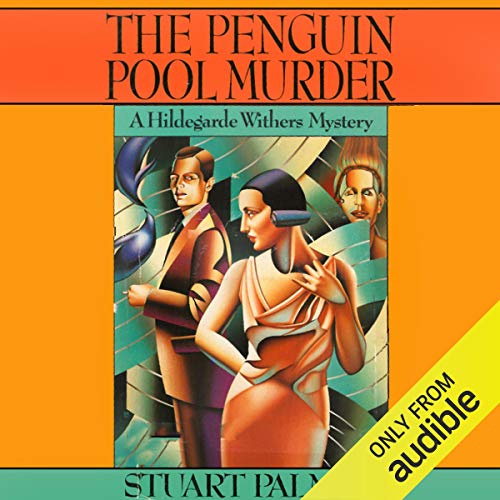 Although the Stock Market had crashed recently, it was too early for most people to predict that the Great Depression was about to get underway. For 39-year-old spinster schoolteacher Hildegarde Withers, it’s business as usual. And part of her usual business is taking her class for an outing to the aquarium to see the penguins. Instead, she spots the floating corpse of Wall Street broker Gerald Lester and quickly realizes that Inspector Oscar Piper of NYPD Homicide isn’t up to solving this tricky case, especially when he appears ready to accept he confession of an obviously innocent young man. Red herrings, not penguins, abound.

Miss Withers has a number of questions that need answers before she’s willing to reel in the real murderer: Who did Lester’s wife meet behind the stairs? What did the pickpocket see? Who was the man in the fedora? And just how did Miss Withers’ hatpin turn into a lethal weapon?

First published in 1931, The Penguin Pool Murder was as big a hit with book lovers as it was with moviegoers when it was filmed the following year starring Edna May Oliver as Miss Withers and James Gleason as Inspector Piper.

Nothing makes me happier than discovering a vintage mystery series I didn't know about, unless it is also discovering that it turns out to be a great read! I gather that this book, starring Miss Withers and Inspector Piper was made into a movie at the time, and I hope to find it.

Miss Withers, a teacher who has brought her young class to the aquarium, is there when a murder occurs at the penguin pool. She demonstrates very quickly that she has a good, grounded sort of common sense, and is able to point out things to the inspector to keep him on track during the inspection. She tends to be immediately accepted by the inspector, who realizes that as she offers good ideas and takes conversations down in shorthand, she is indispensable to solving the crime. Even though she is not officially part of the case, one quickly realizes that the author intends her to be the brains behind the process of solving it.

This book is written with a bit of comedic touch, but I doubt the author could have possibly anticipated how much more enjoyable it would become 80 years later to a completely different audience. In these days, we have authors who create female sleuths, trying to insert them into this same time period (just around the timeout of the stock market crash), and they are are fun to read. But this is the "Real McCoy," a woman who was developed into a clever and observant detective (of sorts), even though she is not really acknowledged that way around 1930 or so.

I love this book, and cannot wait for the next ones. The narrator does a very good job, getting the accents just right! This has been a total treat! Thanks, Audible, for bringing this one on board!

I read most of the Miss Withers books many years ago and enjoyed the 1930's movie series starring Edna Mae Oliver as Miss Withers. I was pleased to learn that the books were going to be released by audible.com.

I'm sorry to say that my enjoyment of this book was greatly marred by the narrator. I would recommend anyone considering the purchase of this book to listen to the sample.

Good start to a Vintage Series


It's always nice to find a good "new" old mystery series that's been around for decades but is completely unknown to me. That's one of the things I love about Audible. Reading other listeners' reviews sometimes gives me great leads to excellent books I've never heard of before. That's how I came across the Hidlegarde Withers series. So far, I've only read the first book, "The Penguin Pool Mystery," and I would classify it as good but not yet excellent. I expect that there will be improvement in future books, and I enjoyed this first one enough to want to read more.

Copyrighted in 1931, Penguin Pool introduces us to Miss Hildegarde Withers, 39-year-old "spinster" school teacher, who has brought her third grade class to the NYC Aquarium on a field trip, and has the misfortune to spot a dead body in the penguin tank. We also meet Inspector Piper, Inspector of Detectives in the NYPD, who is in charge of the investigation of the death. Not surprisingly, Miss Withers has many observations to contribute to the investigation, and after one of her suggestions helps to avoid a mistake in the investigation, Piper begins to welcome her participation. The story is ingeniously plotted, and the setting of early-depression New York City is well done.

I would have given a higer rating if the narrator had been able to make the 30's-era dialog more believable. This was distracting and reduced the overall enjoyment of the book. Still, it was enjoyable, and I will be listening to more of this series.

I was delighted with my first encounter with Stuart Palmer's Hildeguard Withers. It was s fun trip though a contemporary 1931 mystery ... so the listener has to remember that this is NOT a historical mystery, it is a mystery WRITTEN in the early 1930s. It is a product of its time and culture ... and as such, it was a little progressive when it was written, even though it is a little behind by our standards. Julie McKay was a little rough in places, but did a good job over all.

A murder mystery set in the New York Public Aquarium and written shortly after the 1929 Stock Market Crash in New York has 21st century sensibilities; you could see the characters in any current reality show. (No spoilers)
Like many, I was introduced to this series from the fun 30's movies starring Edna May Oliver and James Gleason as the spinster teacher/would-be sleuth and the New York Chief of Detectives Oliver Piper. I could buy the whole series, except for the terrible narrator; I found using my device to play at 2x speed made her bearable. It also irks me when neither the narrator nor the producer/director can be bothered to check pronunciations; a clang to hear sisal [as in the hemp rope for hanging] pronounced as 'sizzle'! It's also a bit rough to hear the sexism and prejudices of almost a century ago, going downhill from the big dumb strong Swede and slaloming through many minorities, but at least we've come quite a ways since.
An above-average who-dunnit which will keep you guessing until the end, with a prickly but likeable heroine and hero. But try the sample to see if you can stand the narrator, and/or try listening at double-speed.

The story (albeit a bit jarring in its racial bias and sexism) is a very well written old-school mystery; written, not set, in the 1930's. Unfortunately, this great story was incredibly let-down by the narrator. I mean, she is truly distracting and laughably bad. The male voices are the worst--with accents that make one cringe, but the pacing for all the voices is strange--I noticed that some people sped her up to 2x, I hadn't thought of that. Her pronunciation of some words is ridiculous... "sizzle" instead of "sisal", "dash-ed" instead of "dashed". Overall, I'm seriously trying to decide if I even want to finish the book, I spend so much time talking out-loud in the car mocking the narrator, that I've pretty much lost all perspective on this book. I seriously will avoid all books read by Julie McKay in the future. How she even got this job is a mystery to me! I honestly can't believe the book's producer listened to this performance and thought "Yup, sounds great to me!" and published it! So, while I really like this book, I'm done with this series because the same narrator is used for all the books.

Would you be willing to try another one of Julie McKay’s performances?

No. I really cannot listen to another book read by this person.

Good story, good development. The ending was somewhat predictable but good nevertheless. It took me a bit to get used to the narrator. Originally found her to be a little annoying but soon got used to her and was okay. She doesn't do gender voices particulary well but well enough. Kept me guessing until the end, I thought I had it figured out earlier, and in fact I had, but then was led away again thinking it was someone else.

Ms. Withers is no Ms. Marple

The story was at best mildly engaging. The murder was fairly obvious from the start, and the only mystery was the backstory they had to construct to give him motive. The attempt to make the book a period piece was clumsy, and the use of slang from the thirties was awkward and no context.

Aside from a barely plausible yarn, the performance was poor. I stopped listening midway through because it didn't hold my attention. I actually listened to a wonderful Walter Mosely mystery, then went back to finish this book because I still had some miles to drive.

Fun and murder in NYC

Reminds me of the fun in the old mystery films from the thirties, well, it takes place just after The Crash, and was published in 1931. Miss Withers is believable, and a young Kate Hepburn would have done justice to her snarks and take-charge attitude. The cigar chewing detective who is smart enough to enlist her help is well done, also. It is a pleasant read with enough twists and misdirections to keep it interesting.
Ms. McKay was perfect as Hildegard, and did okay with the men, too.
I am glad that I bought it on the cheap as Whispersync

If you could sum up The Penguin Pool Murder in three words, what would they be?

What was one of the most memorable moments of The Penguin Pool Murder?

A proposal to end all marriage proposals.

Would you listen to another book narrated by Julie McKay?

Yes, (she reads all the other books in this series) but I wish she'd work on her male voices, she's got the main male character in this book sounding like a teenager who is recovering from laryngitis. not pleasant.

Something fishy is going on at the New York Aquarium

I've loved this book since I first read it in my teens. I never dreamed it would be available on audible, I almost didn't think to search for it. The story is the same as it was in 1930, Hildegarde and Oscar Piper are together in their first mystery, where something awfully fishy is going on at the New York Aquarium. Where there are love triangles, puns, fish, hatpins, penguins, Piper's (pied and otherwise) and a marriage proposal to end all marriage proposals. My only gripe is that the narrator, who does a good job with most of the characters does NOT do what I consider to be a good interpretation of Oscar Piper, who sounds like a disgruntled 13 year old, not an inspector of police. In my head he always sounded like Gene Hackman (Or James Gleason once I got to see the movies).