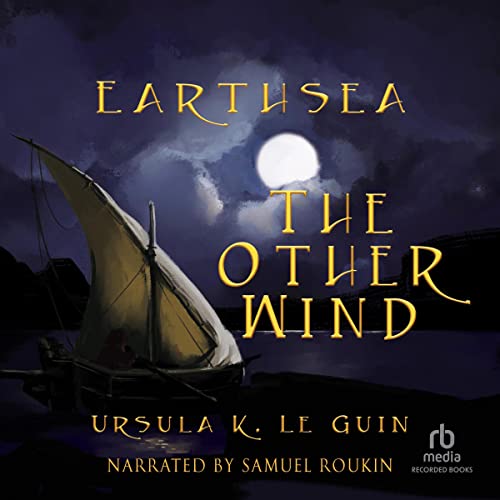 The sorcerer Alder fears sleep. The dead are pulling him to them at night. Through him they may free themselves and invade Earthsea.

Alder seeks advice from Ged, once Archmage. Ged tells him to go to Tenar, Tehanu, and the young king at Havnor. They are joined by amber-eyed Irian, a fierce dragon able to assume the shape of a woman.

The threat can be confronted only in the Immanent Grove on Roke, the holiest place in the world, and there the king, hero, sage, wizard, and dragon make a last stand.

In this final book of the Earthsea Cycle, Le Guin combines her magical fantasy with a profoundly human, earthly, humble touch.

I love the earthsea world. Unfortunately this narrator often put in tones of condesention and arrogance that were not there. Also his voice when narrating a woman's lines was down right insulting. Also he was inconsistent in how he pronounced one of the main characters names, having two dramatically different ways he pronounced it. I only finished this book because I've listen to the rest of the series (narrated by better narrators).

I love this book. A happy and bittersweet ending to a wonderful series. My one complaint was the narrator's inability to decide how he wanted to pronounce the name"Irian". Eye-RYE'n? EAR-ee-on?? Either is fine with me, though most performances seem to go with the latter. But switching back and forth, even within the same short passage, was an oddity and a bit of a distraction from a job otherwise well done

Distracting and inconsistent mispronunciations and odd character voice choices mar an otherwise entertaining read of a great story. Was there no editor around to correct the reader? A female (i.e., higher-voiced) reader would have been more appropriate.

Any lover of fantasy will love the Earthsea Cycle, and it was with eager anticipation that I began listening to this final story in the series. The story is superb -- perhaps a bit slow to get going, but really good and, ultimately, really compelling. But the narrator! It's clear that he isn't familiar with the cycle at all. He mispronounces names and titles constantly. If that weren't bad enough, there's one character whose name he pronounces three different ways, sometimes in the same paragraph! It's dreadfully distracting and I'm terribly disappointed. It's really too bad that the last Earthsea book has such poor narration.

A decent listen, even jarringly pronounced.

It would have been nice if the reader had checked name pronunciations from the previous readings so that the listener wouldn't have to work out which character he was speaking of. I won't say he pronounced them wrong, but someone did, and since this is last book in a series, the effort should have been taken to make the readings consistent.

This was amazing. This brought a return to the magnitude of the original Earthsea trilogy while combining it with the simplicity of the human experience that we found in Tehanu. Like small things that cast a big shadow, so does this book.

Roukin’s narrative performance was also very much of quality. All in all this book has become a favorite. I never felt I would say this, but Ged’s tale feels complete.

The story was not bad. the characters were mostly known, so LeGuin could further develop them. The writing was engaging, as always. But there wasn't enough to be said and done to fill a book. Truly, Earthsea should have ended after the third book. The first three were incredible. LeGuin had more story to tell, but didn't realize it all at once, unfortunately. She could have wrapped the last three books up in one, and it probably would have been much better. All in all, this book was better than the last two, and worth reading, but won't be worth reading again. I'll read the initial trilogy, on the other hand, many more times. Masterpieces.

The final Earthsea novel finishes strong with many loose plot threads tied up, and an emotional but hopeful ending.

The book is wonderful but the narrator does badly. Undecided about how to say the name “Irion,” he pronounces it two ways, often in the same paragraph. He does a terrible job with women’s voices, almost ruining the character of Tenar. Read the book in printed form first.

Dreams and Dragons, the Living and the Dead

The Other Wind (2001) begins fifteen years after the end of Tehanu (1990), as small-town sorcerer Alder (from Taon), whose gift is to mend things, travels to Gont to see seventy-year-old Ged (the former Archmage) to tell him his trouble: every night in his sleep he has been visiting the dry land of the dead and is terrified that they will make him free them to return to the world of the living. It started with a dream where his beloved, recently deceased wife's soul kissed him—bruising his mouth—and asked him to free her. Since then, crowds of dead souls have been asking him the same thing. Unable to help Alder, the “wise” wizards of Roke (Masters of magic) have sent him to consult Ged. When Ged starts dreaming of the dry land, too, he reckons that some change is happening and working through Alder. Ged gets good old Aunty Moss to give Alder one of her kittens, and when the feline sleeps with him its warm touch prevents him from dreaming: “Maybe a cat is as good as a master of Roke.” Finally, Ged sends Alder on to Havnor, where Tenar and Tehanu are staying in the palace of King Lebannen to advise him about the increasingly aggressive dragon incursions into the Archipelago, sensing a connection between the dreams and the dragons…

The rest of the compact novel sets out to resolve the outstanding issues from the earlier stories: death and dragons and human beings and animals. It also develops the characters of people we’ve come to love in Earthsea, like Lebannen, Tehanu, Tenar, and Ged, while introducing compelling new ones like Alder and the Kargish “barbarian” princess Seserakh. There is dragon diplomacy; a multi-national, multi-class, multi-species, multi-gender quest; a cute gambling game played with the islands of the Archipelago as stakes; and an unexpected way for Alder to employ his mending gift after he’s surrendered it.

The Other Wind is an unusual book. It’s a page-turner that made me forget everything in the real world outside for hours at a time as I was reading, while lacking almost all the usual kinds of heroic fantasy action. We hear in passing about King Lebannen taking out a bad slavery piracy kind of force a while ago, and we hear references to things like a wizard dueling a dragon to mutual death long ago, but the present adventure is psychological, emotional, and spiritual rather than physical. There is no dark lord figure like Cob in The Farthest Shore, but rather a bad choice that some influential people made a long time ago. Although the stakes couldn’t be higher, the novel may bore people who require plenty of violent action in black-white conflicts between good-evil.

As for me, I reread many sentences several times to savor their rhythm, image, idea, beauty, or power, like when Alder is introducing his dream about his dead wife to Ged:

After a while he said, “We had great joy.”
“I see that.”
“And my sorrow was in that degree.”
The old man nodded.
“I could bear it” Alder said. “You know how it is. There is not much reason to be living that I could see, but I could bear it.”
“Yes.”
“But in the winter. Two months after her death. There was a dream came to me. She was in the dream.”
“Tell it.”

Or like when Ged, who has permanently used up all his power and is “just” an old man, watches Alder (with nostalgia if not envy) as he mends Tenar’s favorite broken pitcher:

“Now, fascinated, he watched Alder's hands. Slender, strong, deft, unhurried, they cradled the shape of the pitcher, stroking and fitting and settling the pieces of pottery, urging and caressing, the thumbs coaxing and guiding the smaller fragments into place, reuniting them, reassuring them. While he worked he murmured a two-word, tuneless chant. They were words of the Old Speech. Ged knew and did not know their meaning. Alder's face was serene, all stress and sorrow gone: a face so wholly absorbed in time and task that timeless calm shone through it.
His hands separated from the pitcher, opening out from it like the sheath of a flower opening. It stood on the oak table, whole.
He looked at it with quiet pleasure.”

I like that Le Guin doesn't put people above animals as Pullman kind of does in His Dark Materials. “What’s the difference between animals and us? Maybe the difference isn’t language but that animals do and are, while we choose what we do? They’re beyond good and evil, but we have to choose them?” Anyway, we should all be part of the same cycle of life and death. It is neat how she depicts Seserakh as a lioness with humor and courage and beauty (of course) and brains, and it is moving and effective how she shows the King get over his fear of her (and of women in a group) through the course of the adventure.

I'm still sad that Ged refuses to have any contact with Lebannen, who loves him and would do anything he wanted him to do. I know Le Guin is showing Ged as being done with doing and not wanting to be perceived as influencing the young king, but it still seems a little too unsentimental (if not perverse) to deny the reader (this reader!?) a little reunion candy. I also think that she may do a BIT too much summarizing of events from the past novels and “Dragonfly” so as to bring readers new to Earthsea up to speed here; at times it reads like a Greatest Earthsea Hits medley.

Anyway, Le Guin is a great writer of ethical, moral, emotional, spiritual, and philosophical fantasy; simple on the surface but with depths beneath and behind; capable of sublime scenes and earthy ones. And it is amazing how what happens in this book to solve the mystery of humans and dragons and life and death does nothing to violate the first book she wrote in the series back in 1968, almost as though she knew where she'd end up. It shows how carefully thought out and rich her created world and stories in it are. (However, it also <b>thins</b> her fantasy world of much of its fantasy.) Almost every word in this novel is where it should be; everything works for and towards her metaphoric and symbolic and thematic ends.

The audiobook reader Samuel Roukin is fine, with a nice British voice and a perfect manner for Ged and Alder, except for one nearly fatal flaw: he distractingly keeps changing the pronunciation of Irian’s name, sometimes within the speech of a single character.

Amazing as all her books

Great book, but I love all her books anyways - def recommend it to everyone