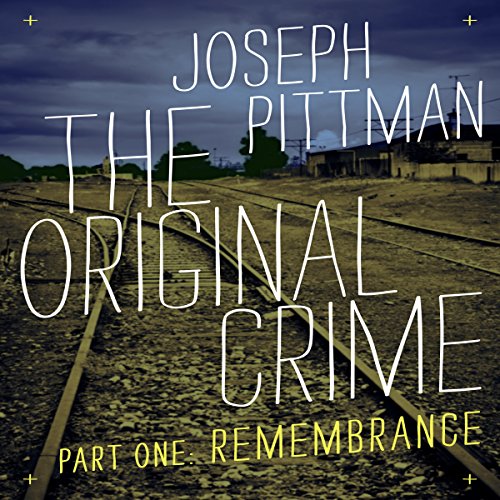 From Joseph Pittman comes this serialized tale of secrets, murder, and the search for the ultimate truth. Combining his appreciation for small-town life, as seen in his Linden Corners series, with his love of mystery, as evidenced by his Todd Gleason crime novels, The Original Crime is a tour de force of suspense fiction.

Matthew Clark has returned to the upstate New York village of Eckert's Landing for a family crisis, only to be dragged down a dark path of murder and suspicion. The body of an unknown woman has turned up on the abandoned railroad tracks, and local police chief Rick Kelly doesn't know where to begin his investigation. The only clue is the fact that the method of murder mirrors that of a killer who haunted the village 20 years ago. But the Engraver, as he was dubbed, is long gone, or so it is believed. What secret has come home to Eckert's Landing, threatening to dredge up yesterday's awful past?

This book comes pretty close to being a good mystery/thriller story but doesn't quite get there. First of all, the quality of narration (not the performance, which was fine, the actual recording quality) was truly awful. Right from the start it was the worst audio recording I've heard on audible and even though I finally got used to that, there was a chapter in the middle there that was even WORSE quality. I came very close to stopping there. But I made it to the end, and that was where I found my other major complaint. I understand that this book is part one of a series, but that doesn't mean the book shouldn't have ANY kind of conclusion. It just stops. That's not how series usually work - if the intention was to have 2 books with no conclusion, then this should have been one long story. Outside of those complaints (which are pretty major, in my opinion) the story was ok. I wouldn't recommend this book to my friends.

I don;t know that I was aware that this is one story in three parts.The story itself is written well.The narration,by Steven P.Woodard was slow,slurred and had odd cadences.It was hard to follow a sentence at times.The actual recording sounded like it was taped in a can at one point.“I was voluntarily provided this free review copy audiobook by the author, narrator, or publisher.”

I get that books in a series don't want to give away all of the answers in the early books. They typically give away SOME answers at the very least though, and leave you with a cliffhanger that makes you want to read the next book in the series. This one just doesn't. It completely leaves you hanging and doesn't give any resolution at all. Books that do this just make me angry-give me something, for Pete's sake!

The narration was a bit on the slow side for me, so I simply sped it up a bit, so no dings for that. I didn't experience any major issues with narration being garbled or sounding weird like some of the others did. Perhaps this is an issue that was fixed by the narrator at this point.

Matthew's story and connection to the Engraver, all in the wake of his mother's death, and his connection to the first victim in the new Engraver murders makes for an interesting story. Having to deal with his now arch-nemesis, Chief Kelly doesn't make things any easier. Though the story is a bit slow in the beginning, it does a nice job of setting the tone and feel for Eckert's Landing and the story that is unfolding.

I want to be invested in this series, I really do. Unfortunately, I don't want to use a credit for the next book because I'm afraid that I'll be disappointed with no resolutions in book 2 as well, which bums me out.

I was voluntarily provided this free review copy audiobook by the author, narrator, or publisher for an honest review.

Not an standalone book, One third of a story.

The story itself wasn't bad. I would've actually enjoyed the book, if it had finished the story. And even if it needed to end on a cliffhanger, to entice readers into buying the next books, there should've been at least some resolution of the story in this book. I got none. I got no answers and just a cliffhanger. That tells me that book two will do the same and I will have to read all 3 books to finish this one story.

Resolve at least some portion of the story and continue the rest in the next book; instead of keeping everything hanging for the next.

What didn’t you like about Steven P. Woodard’s performance?

The voice was slurred and garbled at quite a few places. I had to rewind and relisten multiple times. And the overall pacing was slow too.

I received this audiobook for free from the author / narrator / publisher in exchange for an unbiased review.

Where does The Original Crime: Remembrance rank among all the audiobooks you’ve listened to so far?

This audiobook had a good narration.The reader respects the twistings of the plot and also the feelings of the characters.

The main character was interesting.

I would recommend this audiobook for crime readers.

"This book was given to me for free at my request and I provided this voluntary review."

Be prepared to listen to all three books

I knew this was a three-book-listen but I was not prepared for zero resolutions in book one. There were none. Zero. Nada. In that respect, it doesn't work as a standalone. (Just be prepared.)

I liked the listen but there were some technical issues with the narration. At first I thought it was with my phone and my ear buds but I got the same glitches when listening through my bluetooth speakers.

Book one ended on such a cliffhanger that I will definitely seek out book two. In for a penny, in for a pound.