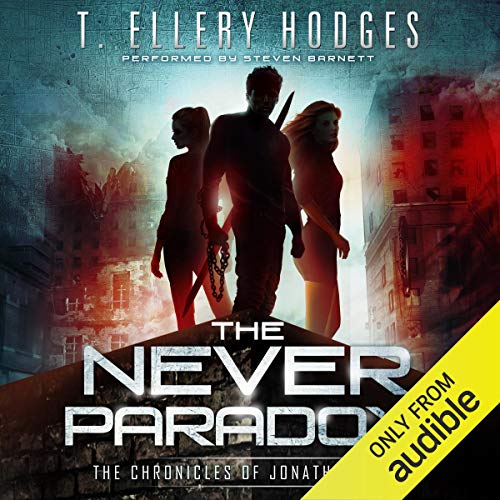 If you lost a piece of your memory...

Would you trust yourself to have made the right choices...

In the moments you can't remember.

The Ferox assault has been escalating, drawing Jonathan into combat more and more frequently. With each passing day, he's grown stronger. He can't be certain, but his attackers seem to be getting...more dangerous?

Then came the glitch. Unexpectedly pulled from battle, Jonathan finds he cannot recall the final moments of his last confrontation. Convinced that his memory loss was no accident, he must uncover the truth.

His only leads are a less than helpful artificial alien intelligence, and Rylee, a mysterious and possibly crazy woman, who seems to think they share a history he doesn't remember.

With no means to contact the only being who can give him answers, and knowing he has gaps in his memory, Jonathan must make every move uncertain of the consequences. The blonde man better show up soon, because events hidden in Jonathan's lost memories may trigger a war humanity isn't ready to fight.

The Never Paradox is book two in The Chronicles of Jonathan Tibbs, listeners who have not yet completed book one, The Never Hero, will have difficulty following.

Parental Warning: This series attempts to keep swearing to a minimum. However, the sequel has one unavoidable usage of the F-word. This is due to its presence in a direct quote taken from another piece of fiction.

Looking forward to the next part of the adventures of dear old Jon Tibbs. The characters are endearing and the story captivating.

I am an avid audible listener and rarely write reviews. But this series deserves more readers! I go through about a book a week as I travel often. This series has me absolutely captivated by the world the author created. Many books fall short with believability, offering poor attempts to explain the fantasy within. Hodges's has made a believable fantasy novel which is very difficult to do. I appreciate an author who can turn a fantasy concept and make it seem plausible. And this absolutely hits that mark. Lovable characters with soft lines between good and evil. I found myself empathizing with the antagonist at times! It's a fantastic series and looking forward to more!

This book did not disappoint...It left me on the edge of my seat...I can not wait for the finale...the narration is spectacular and I will look more into his narrations...take a chance...well worth it...

Why did it have to end?!

This was a book I couldn't put away once I started it. While there was quite a bit of exposition in the middle, it held my attention and was worth the action sequences in the beginning and end. The author did an excellent job with the characters in my opinion. I can't wait for the third book!

The narrator was amazing! He caused the amazing storyline to come alive. The passion and emotions he used for each character was perfectly done. I am suffering from withdrawals from the bond waiting for the third book!

I enjoyed this book very much and will read it again and again. I can't wait for the third book.
I like the fact that there is not much profanity in your books. I hope you will write other books in the same universe.

I love this series. I stumbled on it by accident while looking for a new time travel audio book to entertain me as I walk or drive. This book is full of intelligent thoughts, action sequences, and surprises.

And then he bit his lip, she bit her lip...please stop with the oral fixation in ALL your characters and find another expression.

This kind of sums up the book for me. The characters are incredibly shallow and don't seem to be developing. The problem is everyone is one dimensional and if you could somehow push them all together they would make one solid character. Even the 'wise' characters that are supposed to be thousands of years old show the cheap thought processes of a 20 year old. The conversations that should develop the backstory feel forced rather than a conversation anyone would actually have. The central conflict between the two brothers could be so much deeper and thought out. Even the Jesus comic is more thought out than the main story...

The premise of the book is amazing, a hero that no one will ever know is a hero...all the tropes are there for a successful book. Almost feels like an editor took a good story and forced the author to hit the classic steriotypes so they could sell more: Love triangle, teen angst, even a side parable that is a cute addition to the story. I thought maybe the comic would turn into a vehicle for the main character to explain his story to the rest of the cast but that buss has gone in lieu of a parable of the main storyline in an (slightly successful) attempt at story depth.

Author, I believe you are capable of much better writing. Don't let the editors force you into all the tropes, be bold and trust your instincts to tell a good story.

The story just continued to get better and better... the characters kept evolving... Quarter of the way through the first book I thought the story was moving along but uncertain how it could pull together... Same day I finished listening to the second book (whelp - nothings getting done today) thinking the story, characters and author Amazing.
Hodges builds this intelligent, complex, well thought through world with characters that are deep and true. And the way he uses the sub plot to build the main plot is genius.
I can’t wait for the next book.

I enjoyed the first book. The characters were great. The story was different. Surprising, the second book is better. Almost never happens in a sophomore book. Alot of development in the storyline. Interesting ideas. While the book answers many questions, it also develops plenty of places to take the story. Just hope the third book does not take two years.

A sequel that builds on and surpasses the original

Which character – as performed by Steven Barnett – was your favorite?

I actually loved the new character to this book Riley. She was easily my favorite character in this book. I thought she had a great personality and was completely realized within this one book. Steven Barnett did a great job with all the characters, and the voices were all unique.

I can't wait for the third book. I started and read both of these in the last week, they are addictive. The characters in the world built in these books are pretty great.

How a second book of a trilogy should be.

I won't go into details about the story as it's a sequel.
This book is what I wish every sequel would be. The usual "mid trilogy lul" doesn't happen and the pacing stays strong. There is continual character development and the addition of a new member of the main cast does a lot to help that along.

The narration and editing is solid, nothing to complain about but also nothing that goes above and beyond.

This is easily one of the most interesting stories I've ever read ... or listened to, I guess. And to make this fantastic: the writing is excellent, too!

If I had to classify this series I'd declare it a deconstruction of the hero-mythos. And I'm not talking about "deconstruction" in the sense of an ultra-realistic or ultra-dark reimagining. No, nothing so clichéd. Not that this story doesn't have its fair share of clichés. It embraces them, however, <i>deconstructs</i> them in quite the literal meaning; taking those tropes apart, dissecting them, analyzing them and trying to look at them from other angles, using those things to create an incredible take on a character study. Nerdy, really.

So, if you want to read books with an exciting story, interesting, evolving characters and intelligent, smart, outright clever writing, this is for you.