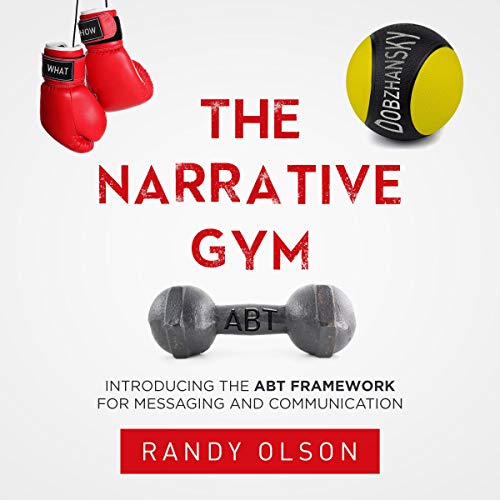 The Narrative Gym: Introducing the ABT Framework for Messaging and Communication

The Narrative Gym by Dr. Randy Olson presents a new model for messaging and communication. It's a short, practical guide to the ABT Framework (And, But, Therefore) which needs to be on the desk of everyone crafting a message, essay, strategy, novel, campaign, proposal, presentation, screenplay, argument, joke, ballad, report...pretty much all communication.

The original insights for this communication model come from Hollywood screenwriting. The importance of the three words (And, But, Therefore) began with legendary screenwriting instructor Frank Daniel of the U.S.C. School of Cinematic Arts who in a 1986 speech first talked of replacing the word “and” with either “but” or “therefore” to strengthen the narrative content of a text. This was propagated by his students, then articulated by the co-creators of the animated series, South Park, in a 2011 documentary. Randy Olson formulated the ABT Narrative Template (“___ And ___ But ___ Therefore ___”) in his 2013 TEDMED Talk, and his 2015 book, Houston, We Have a Narrative. It is at the heart of how humans have communicated for thousands of years. You can see it in the Gettysburg Address, nursery rhymes, argumentation, comic structure, myths, the billion-viewed “Call Me Maybe” song from Carlie Rae Jepsen, the 1600s poem “To His Coy Mistress", blockbuster movies - on and on. It's at the core of everything memorable because it is narrative itself. The bottom line is: You’ve got something to say and you know it’s important, but you’re having trouble boiling it down to its powerful and essential core, therefore you need the ABT framework.

“The Narrative Gym is the definitive communications tool for the Information Society.” (Michael Strauss, former head of the Office of Science Quality Review, U.S.D.A.)