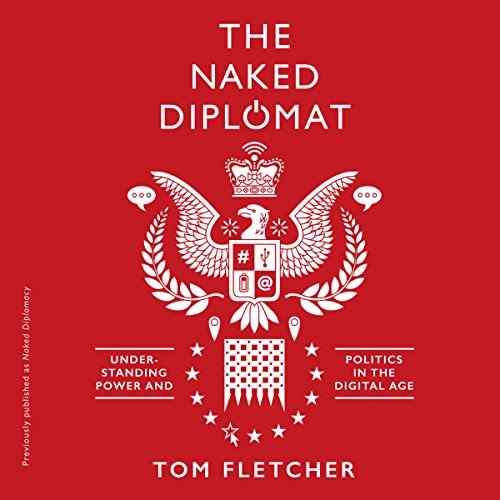 The case for paring diplomacy back to its essential elements. Stripped of the paraphernalia, what is it really about, and why does it still matter? The essential attributes are now thick skin, an open mind and a smartphone.

In the next century, we will need to deal with the equivalent of social development of the last 43 centuries: like the change from cave paintings to the atom bomb. We will see the arrival of the digital native, the rebirth of the city-state, the battle for new energy, disappearing borders, disruption and diplomacy.

So who will really be in charge of the 21st century? Will Google be the new emperors? How do you influence the future?

In The Naked Diplomat, Tom Fletcher - an experienced foreign representative - explores the core principles of a progressive 21st-century foreign policy: how to balance interventionism and national interest, use global governance structures to achieve national objectives and explore representative international systems.

Reevaluating the core question for diplomacy - who do we represent? - Fletcher discusses smart power, soft power and the new interventionism alongside lessons from our most notorious leaders and diplomats - Talleyrand, Kissinger, Mandela and the Kennedys.

Offering real-world examples of how diplomacy is having a significant impact on people's lives and why it will continue to do so, this is the refreshed case for diplomacy in the digital century.

"A diplomatic genius." (Gordon Brown)
"Welcome to Britain's new brand of diplomacy." (Evening Standard)
"On Her Majesty's Service, in a new way. Britain's mould-breaking ambassador was appointed at only 36 at the height of the Arab Uprisings. Fletcher's [The Naked Diplomat] was a new brand of 21st century statecraft: flexible, transparent, engaged with the public as much as with politicians." (BBC World Service)

Interesting, engaging and worth listening to

I found this book to be interesting, engaging and worth listening to. On the whole, highly recommended.