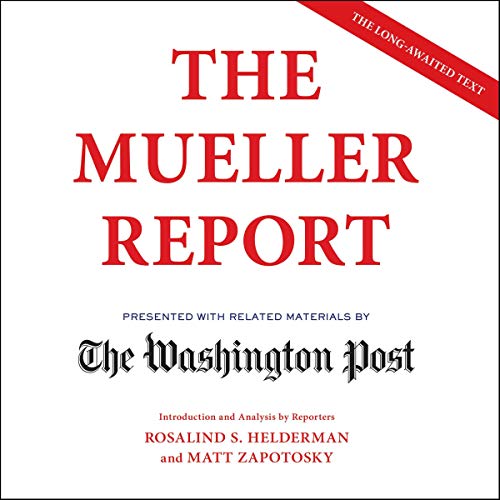 The only book with exclusive analysis by the Pulitzer Prize-winning staff of The Washington Post, and the most complete and authoritative available. Includes a PDF of documents and other reference materials.

Listen to the findings of the Special Counsel’s investigation into Russian interference in the 2016 election, complete with accompanying analysis by the Post reporters who’ve covered the story from the beginning.

This edition from The Washington Post, Scribner, and Simon & Schuster Audio contains:

One of the most urgent and important investigations ever conducted, the Mueller inquiry focuses on Donald Trump, his presidential campaign, and Russian interference in the 2016 election, and draws on the testimony of dozens of witnesses and the work of some of the country’s most seasoned prosecutors.

The special counsel’s investigation looms as a turning point in American history. The Mueller Report is essential listening for all citizens concerned about the fate of the presidency and the future of our democracy.

If you would like to listen to only the report and have no interest in interpretations start on Chapter 4. Chapter 3 is a timeline.

Grateful for an opportunity to know for myself...

This report is a BIG DEAL and it's difficult to comprehend its enormity from just hearing someone tell you about it. Top-notch production.

Read all the way through reading the text with the Audible accompaniment. The reading was very deliberate at the 1x speed. It allowed one to soak the message in, but upping the reading speed on a second read would be recommended. The Report is clearly written but there is a lot of legal discussion and analysis, especially in Volume II, discussing the President’s obstruction of justice.

much more riveting than expected

actually a riveting story, especially because it fts together the pieces I know, and makes sense of it.
excellent narration

Crimes Committed; We Do Not Have the Reasons Why

The Mueller Report, By: The Washington Post. First, this is not an easy read for a layman. It is steeped in legal analysis. (But as I am an attorney it was the usual every day reading. Well, let me correct that; most of the paperwork one reads in litigation is junk product. The Mueller analysis was an expert display of legal reasoning.) So not an everyday interesting read; but a rational statement of what was happening in the Russian interference in our choosing of our president and other officers of state in 2016. That was Volume I. It next goes on to discuss interference with the investigation by the president, Donald J. Trump. That would be Volume II.

President Trump was exonerated from being complicit with or if you rather conspiring directly with the Russians in their support for his being elected to the presidency. Yet, the now President and his entourage were complicit in that although they did not coordinate they accepted the fact that a nation and its leadership that means no good to our freedoms and way of life, a nation who would like to make us into an oligarchy, were allowed to roam free in their disruption of our political freedom and this man who alleges to be a patriot, President Trump was pleased with that fact.

The more interesting part of the report was Vol. II, on obstruction of justice, i.e. obstruction of the Mueller investigation and its incidental prosecutions. The president, per the information reported, committed criminal acts for the singular purpose of hiding a true understanding of his past acts. He interfered, and one must ask the question why. Mueller does not tell us that. Only that the President committed crimes.

What I get from the read is that the Congress must continue and find out more about Trump’s past and present. He has committed crimes, but do we know all the crimes. Not yet.

By the way. Read the report. Hearing the report was not satisfactory. Also, buy the free copy, the Washington Post version provided nothing essential for the extra cost.

The details were exactly what I was looking for. I came away with an informed opinion.

Collusion: Yes, Obstruction: For Sure

This excellent historical account of Russian interference in the Presidential election of 2016, the connections between the Trump campaign and Russia and the criminal behavior and collusion of the President of the United States and his election team is a thorough, fact filled narrative with clear connections to legal principles and statutes. The first part details the successful efforts of the government of Russia to infiltrate social media, assist the Trump campaign, disparage Hillary Clinton and hack the election computers of 21 states and an election computer vendor. What is the President doing about that? Nothing. Bipartisan legislation was introduced two years ago to assist states and the Federal government in coordinating efforts to prevent Russia from repeating its criminal behavior in future elections. Mitch McConnell will not let it come to a vote in the Senate because President Trump will not sign the bill.
While the President and the Republican National Committee falsely tout “no collusion,” the Mueller report details significant contacts between the campaign and Russia. Many facts are included in detail in the Flynn, Manafort, Gates and Cohen convictions. The Special Prosecutor was unable to establish criminal behavior between the campaign and the Russian hacking of Secretary Clinton’s emails. However, Mueller also carefully excludes the term collusion from criminal inquiries as it is not a legal term defining criminal conduct. He does however conclude that collusion in many forms occurred such as future National Security Advisor Michael Flynn successfully telling the Russian ambassador that Russia need not react to American sanctions because Donald Trump was going to be friendly towards Mr. Putin’s regime.

The Special Prosecutor then describes the attempted criminal behavior of Donald Trump, Jr. in his meeting with Russians at Trump Tower that was the subject of Donald Trump lying to the American people (adoptions). Mr. Mueller concludes that it would be difficult to establish whether Donald Trump, Jr. knew he was committing a crime, but that could be resolved by asking him to testify to Congress.
We then have President Trump’s obstruction of justice which is not charged only because Mueller’s Department of Justice told him that President Trump is entitled to obstruct justice as he cannot be charged with a crime while he is President. Mueller makes his employers’ restriction clear as well as his obligation to accede to its directive. Mueller than establishes the facts and connects them to the statutory obstruction of justice elements that outline at least fifteen instances of obstruction by the President. As a result, former FBI Deputy Director Andrew McCabe has been vindicated by written proof and the statements of the Trump team who contradict the public and private statements of the President.

Finally, we have the detailed legal brief that answers the claim of the attorneys for President Trump that a sitting president can criminally obstruct justice and fire anyone seeking to prove such a crime like the Special Prosecutor. It is astounding that the President of the United States is claiming that he can commit a crime and then prevent anyone from investigating his criminal conduct. Thankfully, Mr. Mueller concludes that such legal reasoning is significantly flawed by precedent (United States v. Nixon is cited six times), statutory language and history.

Beyond the Special Prosecutor’s facts and conclusions, some things are astonishing. Mr. Mueller demonstrates dozens of times when the President lied to the American people such as his adoptions press release, his Trump Tower negotiations and his claims that witnesses (Comey, Gates, McCabe, etc.) and/or their family members (see Cohen’s and McCabe’s families) committed crimes. He lied when he said Mueller applied for a job in Trump’s administration as head of the FBI. He lied about Comey asking to come to dinner (where loyalty was discussed) and lied about the negotiations for Trump Tower in 2017 during the campaign. Mr. Mueller did not investigate Donald Trump’s lies about Mr. Cohen paying for the silence of women who had sex with Mr. Trump and its illegality as tax fraud and campaign finance violations. Therefore, that is a subject for a Congressional inquiry despite Mitch McConnell’s statement that everything has now concluded.

It is also astounding how unintelligent our President is. He publicly said he wouldn’t pardon people because they haven’t been convicted of anything, ignoring the most famous pardon of the 20th Century, unindicted Richard Nixon. He believes that Robert Mueller shouldn’t be allowed to be Special Prosecutor because he chose not to renew his membership at a Trump golf club because of a fee dispute in 2011. He thinks Hilary Clinton gave Andrew McCabe’s wife over $400,000. He thinks the FBI and the Attorney General should be loyal to Donald Trump even if such loyalty does not serve the citizens of the country. He has said, without any proof, that 80% of the FBI agents voted for him. He asked McCabe who he voted for President. He believes that Russia did not interfere in our election because Putin told him so. On April 25, 2019, a month after the Mueller report was sent to the Attorney General, Donald Trump emailed, “The Waste of Money Mueller Report is out and we know two things for sure: There was NO COLLUSION or OBSTRUCTION by President Trump.” He must have read a different Mueller report.

In sum, this is an amazing, informative report even with redactions. I recommend it to every voter.

Yes the report is lengthy but you need to know what’s in it if you care about your country.

I appreciate the introduction and conclusion the Washington Post provided. They were brief and consistent with their reporting. However, the focal point or “star” was the Report itself. Especially, the investigation into Russia’s interference in the 2016 Election. Their fear of a Clinton Presidency is palpable.

Trumps efforts to obstruct the investigation show his obsession with the probe and the question of the legitimacy of his Presidency. The biggest take away is his sole desire to do business in Russia for his personal benefit. He seems more concerned with his self aggrandizement, and pursuing business opportunities in Russia than he is in the dignity of the office that he holds. Had he trusted the legal system, he would never have faced the issue of obstruction he faces today.

I mean, ferfuxsake, Russia has its hands ALL OVER the US elections in 2015/2016 and MULTIPLE contacts with Trump team and this is listed as not being treasonous?

Dozens of Russian assets are in near-constant contact with the Trump campaign, saying over and over that the Russian government 'loved what they heard' from DJT and that they were committed to 'helping' his election.

This is not considered conspiracy and treason in the United States?

I cannot fathom how these people are not all nailed to the wall for selling out the USA to Russia.