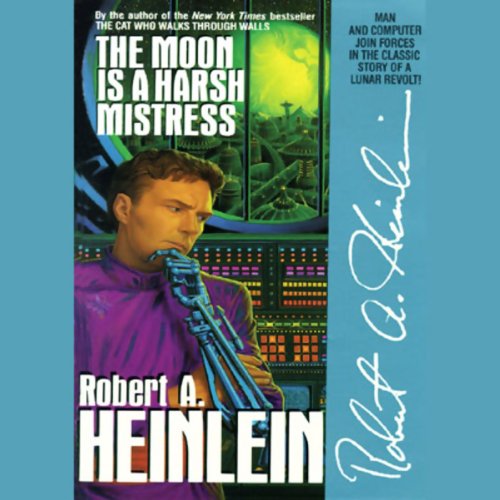 The Moon Is a Harsh Mistress

In what is considered one of Heinlein's most hair-raising, thought-provoking, and outrageous adventures, the master of modern science fiction tells the strange story of an even stranger world. It is 21st-century Luna, a harsh penal colony where a revolt is plotted between a bashful computer and a ragtag collection of maverick humans, a revolt that goes beautifully until the inevitable happens. But that's the problem with the inevitable: it always happens.

Winner of the 1967 Hugo award, this novel marked Heinlein's partial return to his best form. He draws many historical parallels with the War of Independence, and clearly shows his own libertarian political views.

I was initially surprised by the use of the Russian accent for the narrator but it works and works well. I'll never read the book again without hearing that accent. And his other "voices" for the main characters - especially "Mike", was right on. This was a very well done reading of a must read classic.

This is quite simply the best book Robert Heinlein wrote. While the premise is somewhat implausible (ship convicts to the Moon? More economical to ship hydroponic grain from the Moon than to grow it on Earth? - I don't think so), it serves as a platform for Heinlein to explore topics in politics and philosophy. These include: what does it mean to be human? What is the relationship between duty, responsibility and rights?

Heinlein is able to pull this off by embedding the "politics" in a real page turner about a revolt by colonists on the Moon against the tyranny of the home planet. Heinlein keeps the plot zipping along with plenty of action and "gee, whiz!" techno gizmos that are only slightly dated today (the book was first published in the mid-60's).

The characters in this book are the among the most fully realized in all of Heinlein's work. The narrator is a one-armed computer repairman, whose best friend is only sentient computer in existence, Mike. Heinlein treats Mike's alienation and attempts to become "human" with a light hand and sympathy.

The first person language used in the book contains a rich argot from the dozen or more nationalities that make up the lunar colony. This contributes greatly to make the setting believable and real.

As good as the book is, Lloyd Jones improves on it. His vocal characterizations are wonderful, and brought out elements of the character that I never noticed before, despite having read the book at least a half dozen times in the past.

I would recommend this book whether you are coming to it for the first time, or if you have read it many times before. It puts a fresh face on one of "the Grandmaster of Science Fiction's" greatest works. If you love science fiction, you owe to yourself to give this book a listen.

I read "The Moon is a Harsh Mistress" in high school,and now that I'm "reading" it again 15 years later I realize how much I missed the first time. Heinlein has written a literate sci-fi classic that delves into philosophy, Revolution and other always current topics. Narrator Lloyd James clarifies my biggest problem with the book: protagonist Manny's sometimes odd language and syntax. When Manny speaks with a Russian accent, all is clear. Recommended for lovers of sci-fi and good stories!

This books is better in audio translation

Heinlein once wrote (in _The Number of the Beast_ that Tolstoy's works gained from translation. That I cannot judge, but _The Moon is a Harsh Mistress_ which is one of my favorate books and one I reread periodically, gains from Lloyd James's translation. In particular, his voice for Mannie sounds both authentic and more multi-dimentional than the voice I imagined when reading the book. His brief chuckles punctuate Mannie's sly humor beautifully.

I know this is an audio version I will be listening to again. In fact, I imagine I will pull it out every time I go back to reread the book.

As for the book itself -- if you only read one book of Heinlein's in your lifetime -- this is the book you should read. Seriously.

As pertinent today as when written.

One of my favorite Heinlein tales. Thought provoking - humorous- touching - with excellent narration and flow.

TANSTAFL - A lesson well with learning!

There Ain't No Such Thing As A Free Lunch! A wonderful story, well worth your time. Classic Heinlein

The story in itself is already a classic, I won't even write about that, there's plenty about it on the Net, just search about it.

But what to say of the narration ? simply A-S-T-O-U-N-D-I-N-G !! The narrator does a fabulous job - he did not cease to amaze me with his prowess doing accents, voice pitches, etc, amazing story to be heard!

The bad thing is: It won't believe a single word of what you hear and listen on the TV news anymore, you'll see and appreciate the machinations behind everything from this point on... thanks to professor De la Paz and the rest of the conspiratory group ;-)

Loved this. Great narration. This narrator sets the standard. It has been awhile since I listened and the images are still fresh in my mind. It is amazing that this was written in 1966. It could have been written last year. Excellent story with a great message.

I enjoyed the book and loved the narration. I have read many great books and some I have failed to appreciate. This is a classic that I have just failed to appreciate a lot. There were parts that made me laugh out loud. I felt that best character development is exemplified in the computer Mike. Not being so far into the future, 2070 or so, one might expect to identify closely with some of the characters. I did not. The story seemed quite implausible and that says a lot given I have read much more phantasmagorical books that even seemed possible some time in the future. With all the criticism, the book was enjoyable. When I started writing this review I gave the book a rating of 4 stars. As I finish it I have concluded that for me it really only ranks 3.

I agree with the reviewer who commented on the surprise, but workability of the narrators accents. It explains alot about the syntax Mannie uses. You'll quickly get used to it, and it goes far in letting the listener track WHO is talking.

What can I say? It's classic Heinlein at his best. The anachronisms are a bit attention getting, but not so much that it detracts from the story.

This is a must for any sci-fi buff's collection.

I Ioved the book. Maybe Not as great and epic as cixin liu Or Asimov but a very unique voice.

Even better thanks to the narrator

The story is a classic (a bit dated, maybe, lots of male decision making and emotional women) and needs no further words, but the voice acting is more than incredible. Lloyd James makes Mani, Stu, Prof and Wyo come alive, and makes you feel with Mike. Eh, with Mychelle. Adam? All of them!

Excellent Book if you know what you're gettinginto

Knowing the age of the book and this recording of it being read, it still takes some getting used to. The chosen accent for the main character was irritating sometimes. Nevertheless, he had a clear voice at all times and was easily understood, even at 190kph on a german highway.
Concerning the book itself: I kind of liked it. It had some strange concepts of rebellion and politics and made it seem quite easy. The liberal political views of the author were hammered in quite strongly. Certainly worth a read/listen for Sci-Fi fans, but at least for me, there are better books out there.

Great story that aged more or less well. The political ideology is very extreme and not for me.