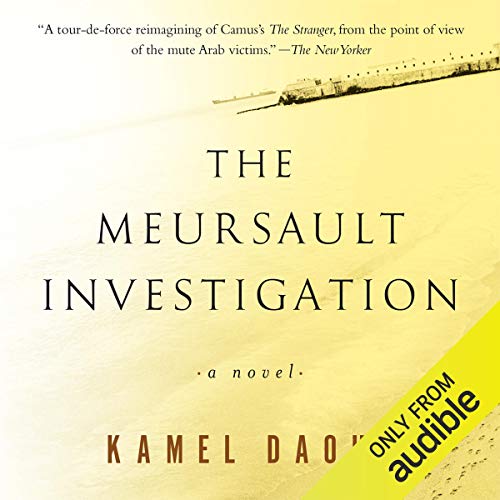 He was the brother of "the Arab" killed by the infamous Meursault, the antihero of Camus' classic novel. Seventy years after that event, Harun, who has lived since childhood in the shadow of his sibling's memory, refuses to let him remain anonymous: He gives his brother a story and a name - Musa - and describes the events that led to Musa's casual murder on a dazzlingly sunny beach. In a bar in Oran, night after night, he ruminates on his solitude, on his broken heart, on his anger with men desperate for a god, and on his disarray when faced with a country that has so disappointed him. A stranger among his own people, he wants to be granted, finally, the right to die.

The Stranger is of course central to Daoud's story, in which he both endorses and criticizes one of the most famous novels in the world. A worthy complement to its great predecessor, The Meursault Investigation is not only a profound meditation on Arab identity and the disastrous effects of colonialism in Algeria but also a stunning work of literature in its own right, told in a unique and affecting voice.

"A tour-de-force reimagining of Camus’s The Stranger, from the point of view of the mute Arab victims." ( The New Yorker)
"Fajer Al-Kaisi's performance of this fascinating and disturbing book is crisp and beautifully articulated.... This audio production makes a striking novel of ideas a rich and human experience." ( AudioFile)

In The Meursault Investigation, the "stranger" is fully developed, at once resented, loved and mourned. The tone is searing (v. Stranger's detachment); the language equally sparse. This book has been hailed as a loving tribute to Camus' masterpiece. It has also been recommended as a mandatory accompaniment to The Stranger. I agree with both conclusions. I strongly recommend (re-) reading The Stranger then immediately delving into The Meursault Investigation. You will be enthralled.

Kamel Daoud resurrects Camus’s main character from the book, “The Stranger”, by recounting the imagined life of an Algerian killed by Merusault. Nothing is absolutely known about Merusault’s victim. Camus suggests Merusault believes the victim is one of two people who assaulted himself and a friend on an Algerian beach. Merusault is sentenced and executed for murder but less for being guilty than of not caring for his dying mother, not believing in God, and living life without purpose.

Harun, Daoud's main character, and Merusault are the same; i.e. both are nihilists (neither believing there is meaning in life); both have little regard for their mothers, both live lives that demand nothing, give nothing, and mean nothing. Both are immoral. Neither believes in God or religion. Life is trivialized in both Daoud’s and Camus’s stories; i.e. Daoud represents an Arab perspective, and Camus a French perspective; similar outlooks, different ethnic backgrounds, but the same point of view. The devastating conclusion infers Algeria is as doomed by independence as by colonization.

The Stranger is the classic of existential lit. Daoud's novel is the parallel, antithetical, yet reduplicated story of the unnamed 'Arab' whom the anti-hero of Camus' novel kills. But, be warned - If you haven't read The Stranger recently and haven't had to read it critically, then The Meursault Investigation will fall short. The brilliance of this novel is the layering that creates at first a contrast between Camus' Meursault and Daoud's narrator Harun, who tells the story of his dead brother Musa - 'the Arab' shot in Camus's novel -- but ultimately shows they are two sides of a single coin.

Absence of a god versus the killing of god/religion; the death of an unnamed local by a privileged colonial vs the death of a colonial after the end of the war for independence; the failure of that war and independence to live up to the expectations of those who wanted better and how the victors destroyed their own world in that reach for freedom; and trials not for killing someone but for their failures of character -- these are some of the complex comparisons and contrasts Daoud explores as his narrator tells his tale in bar over a series of nights.

We are eavesdroppers on an intimate conversation 70 years after the death of Musa. We only hear one side, but the interviewer carries his copy of The Stranger (here presented as a factual account written by Meursault) and we can glean what it is he asks periodically. Harun is witty, and contemplative, but angry and obsessed, his entire life revolved around the incident of his brother's death and the book written about it. He is a hard man, and ultimately unsympathetic. There were moments where I wondered if his brother had been in fact the 'Arab' at all - that instead he became the substitute for the brother that disappeared and gave him a target for his righteous indignation at the colonists and the religious.

Though I finished the book, I found it unsatisfying. So heavy, so dreary, just an angry rant from start to finish. The idea of following up on Camus' "Stranger" with a derivative counterweight, to me, failed big-time. The narration, however, was quite good.

Fills much of the egregious emptiness left by Camus. The narrator is much too young, but don't let that stop you.

What is the point?

I don't usually write a review because I think that reading is a very personal endeavor and everyone relates differently to the book. But this book, for me was dreary, repetitive and so rambling as to make little sense in parts. I was originally intrigued by the premise, having just finished The Stranger, but that soon got lost in babble. History is written through a biased lens and I understand that Camus leaves the "Arab" anonymous...he was marginalized by the one writing the history. If that was the core of this book, it would have been interesting.

I had such high hopes for this book. It is a relentless spewing of self pity and wallowing in victimhood. What happened to him and his family and his people and his culture and his country was dispicable, but his endless whining did nothing to explore the issues and did a diservice to the injustice perpetrated.

What disappointed you about The Meursault Investigation?

This sounded like a brilliant idea. The story of the Stranger from the point of view of the Arab family of the murder victim. That kernel of an idea is the last bit of creativity you'll find in this "novel". No character development. No plot. Just a tedious adolescent monologue by the narrator. Even as short as it is, if felt unendurably long.

Would you ever listen to anything by Kamel Daoud and John Cullen - translator again?

Which character – as performed by Fajer Al-Kaisi – was your favorite?

There are no real characters in this book.

If you could play editor, what scene or scenes would you have cut from The Meursault Investigation?

I would have bought the idea, and turned it over to a writer - Orhan Pamuk, perhaps - to turn into an actual novel.

Meursault Should Have Shot Kamel Daoud

Would you try another book from Kamel Daoud and John Cullen - translator and/or Fajer Al-Kaisi?

Never for Daoud, Cullen was only the translator.

Would you ever listen to anything by Kamel Daoud and John Cullen - translator again?

What character would you cut from The Meursault Investigation?

The book is exploitive, a dirty trick on Camus fans. Its narrator is a fictional brother of Meursalt's unnamed Native Algerian murder victim in The Stranger. He spews out a seemingly endless disorganized railing against the unfairness of it all--Camus becoming famous while denying the narrator's brother an identity by not mentioning his name, a microcosm of the whole nasty colonial experience, and the bother was a swell guy to boot, helped support the family, treated the younger brother narrator to peppermint ice cream. (I made up the ice cream, but it was something like that.) Details I do not remember because I I have tried very heard to forget everything in this book. I already knew that the French treated Algerians wretchedly. I've seen The Battle of Algiers; know that Camus was broadly criticized for his failure to condemn French actions in it. Repeated invective and expressions of self-pity however well deserved soon become tedious. They become unbearably so ten minutes into this audiobook. By a considerable margin The Meursault Investigation is the worst audiobook I've ever listened to.