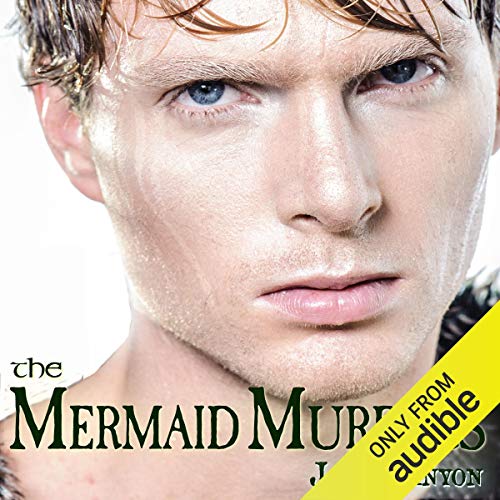 Special Agent Jason West is seconded from the FBI Art Crime Team to temporarily partner with disgraced and legendary "manhunter" Sam Kennedy when it appears that Kennedy's most famous case, the capture and conviction of a serial killer known as the Huntsman, may actually have been a disastrous failure. The Huntsman is still out there...and the killing has begun again.

I love Josh Lanyon. I have read a fair amount of Lanyon books. I didn't think it was possible with how much I fell in love with Adrien English after listening to the audiobooks, but The Mermaid Murders is now my favorite Josh Lanyon book.

I really enjoyed the narration of this one and felt that the voices were absolutely perfect (especially his Sam Kennedy voice!).

This book was just about perfect in my eyes and the only thing that would have made it better was to have Sam's POV. Do we really have to wait for 2017 for the next one? Waaaaahhhh!

Josh Lanyon is one of the best there is at weaving mystery with romance. Her ability to capture the human condition, to paint all of her characters in a unique and compelling light, is second to none. Sam Kennedy and Jason West are prime examples, as they are each flawed, complicated, and compelling men. The mystery in this story is very tightly written, so intriguing. A definite "read till the end without putting it down" book. I read loads of mysteries and was still surprised at the reveal in this one. Lanyon also writes locations that are so vivid, they feel like actual characters. With this book, I felt as though I was actually there in the midst of the action - seeing, feeling, smelling, tasting. The Mermaid Murders has become one of my favorite Lanyon books and I eagerly await the next book in the series, early in 2017.

I am a huge fan of audio books and have several favorite narrators. Well, add Kale Williams to the top of that list. He took a story I already love and brought it to an entirely new level of awesome. He voices each of the many characters distinctly, capturing their personalities to a T. Nobody sounded like a caricature, no character's voice got confused with another. The character of Sam Kennedy is quite imposing, and Mr Williams absolutely nailed his voice, his mannerisms, his humanity. He conveyed Jason West's strength and sensibilites with sublime detail. To summarize, Mr Williams acted this story to perfection - smoothly capturing each character's emotions, state of mind, and actions His gripping performance had me starting the audio over again the moment I finished it.I am very happy to report that he has agreed with Josh Lanyon to narrate the next two books in this series. Lucky, lucky are we audiophiles!

A huge fan of Josh Lanyon and this story does not disappoint. Murder, mystery, and mayhem...plus a bit of romance. An excellent book. I was kept in suspense right until our protagonist figured it out...those are the best stories!!! As great as this audio book was, the narration of Kale Williams made this story come to life and added so much to the enjoyment. A great combination. An excellent listen!

FYI: It's not about mermaids! I'm a huge paranormal science fiction fan and assumed this was about actual mermaids..... nope, total murder mystery haha! Once I let go of that and actually listened to the audiobook, I could t stop! It is terrific!

This an excellent murder mystery but I guess I was just looking for some more build up chemistry between West and Kennedy which I didn’t feel. I think I was hoping for something similar with the sizzling chemistry of Ty and Zane another series. 😉

I loved this book! The only creepy part was I listened to it on my drive to South Hadley, MA. That was surprising to listen to a book with a serial killer near that area! This is a book I will definitely listen to again! The narrator did a fantastic job and really brought the story and characters to life!

I've actually listened to this series twice in one week and am considering a relisten once I finish my current series. That's how much I love this series. The writing and narration are just perfect!

Would you consider the audio edition of The Mermaid Murders to be better than the print version?

Yes, I thought the audio made the book.

I liked both Sam and Jason. The character were different but compelling.

He did a great job with the voices.

When Sam finally showed some emotion at the end of the book.

I enjoyed thus series and the spin off stories.

Would you try another book from Josh Lanyon and/or Kale Williams?

Yes -- I like Josh Lanyon quite a lot. I just found the first book in the series dull,and I didn't like Jason - who's part of the MC. I found him obnoxious and pushy, and even a little on the whiny side. I liked Sam Kennedy much more.

This just made me wish she'd kept going with the All's Fair series, rather than moving on to this one. TOAM is setting up the arcs for what's coming, so I'm hoping we'll get some development in Jason and Sam's relationship. There's really no romance here at all. Explicit sex isn't a requirement for me to enjoy a story, but these two have absolutely zero chemistry in the two scenes that there were.

As for the writing, there's an annoying amount of adjectives. If you have to remind me in every sentence who's talking, your conversations aren't flowing as well as they could be.

The ending felt like it went on and on and on. It's as if she wasn't sure where to end it. In the last 90 seconds it abruptly switched course, which made it feel choppy. But again, it is a set up for a future relationship between Jason and Sam. It just seemed to be rushed, as if she cut quite a bit out.

What does Kale Williams bring to the story that you wouldn’t experience if you just read the book?

I like Kale's performance. I hadn't heard him narrate before, and his use of accents and pitch made it easy for me to identify who was speaking.

No. It's very talky, and there's not much in the way of action, humor, or romance. The mystery is only OK, and it is populated with too many unnecessary characters.

I generally like josh lanyons books...…..which is why it shocked me that this one was SOOOOO terrible, the main character whos supposed to be an fbi agent acted like a meek little girl, the love interest treated him like a tiny little kitten.....and that's how he acted, kenedy said things to him that would make ANYONE with even a little backbone let alone a FBI agent bristle kick someones ass, but Jason just smiled and said I can do it look at me!!!! DO NOT get this book if want a character whos actually got any balls, this is another MM romance where the main characters and love interest are a Man FBI Agent Kenedy and a woman ...FBI agent Jason west, or Jasmin west as the name should have been, its like these authors think that an MM romance book behaves JUST like a straight romance book with one person being the weak submissive one and one being the MAN, if your gonna right an MM novel make sure the Characters are BOTH Men, Men have pride and get angry over tiny little things, let alone the things that went on in this book, good god, I whish the authors read these!

Exiting mystery with an interesting investigation and a gripping love story.
Kale Williams has a wonderful voice. Highly recommended!