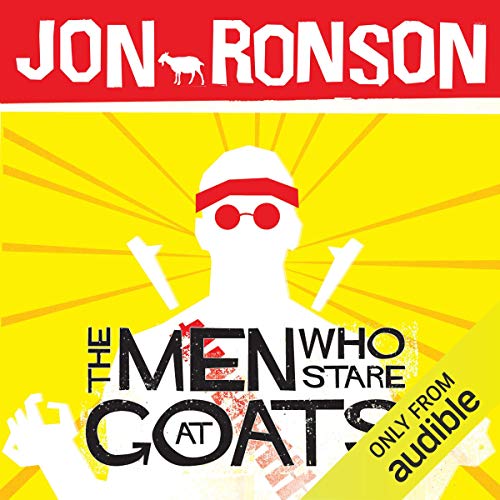 The Men Who Stare at Goats

The Men Who Stare at Goats

In 1979, a secret unit was established by the most gifted minds within the US Army. Defying all known accepted military practice - and indeed, the laws of physics - they believed that a soldier could adopt the cloak of invisibility, pass cleanly through walls and, perhaps most chillingly, kill goats just by staring at them.

Entrusted with defending America from all known adversaries, they were the First Earth Battalion. And they really weren't joking. What's more, they're back and fighting the War on Terror.

The Men Who Stare at Goats reveals extraordinary - and very nutty - national secrets at the core of George W. Bush's War on Terror. With first-hand access to the leading players in the story, Ronson traces the evolution of these bizarre activities over the past three decades, and sees how it is alive today within US Homeland Security and post-war Iraq.

Why are they blasting Iraqi prisoners-of-war with the theme tune to Barney the Purple Dinosaur? Why have 100 de-bleated goats been secretly placed inside the Special Forces command centre at Fort Bragg, North Carolina? How was the US Military associated with the mysterious mass-suicide of a strange cult from San Diego? The Men Who Stare At Goats answers these, and many more, questions.

Jon Ronson is an award-winning writer and documentary maker. He is the author of many best-selling books, including Frank: The True Story that Inspired the Movie, Lost at Sea: The Jon Ronson Mysteries, The Psychopath Test, The Men Who Stare at Goats and Them: Adventures with Extremists. His first fictional screenplay, Frank, co-written with Peter Straughan, starred Michael Fassbender. He lives in London and New York City.

"Few more earnest investigative journalists would have had the brilliant bloody-mindedness to get what he has got and hardly any would have the wit to present it with as much clarity." ( The Observer)
"Simultaneously frightening and hilarious." ( The Times)"

FINALLY! In Ronson's own voice!

Honesty, I have collected Ronson's audio books for years, but was disappointed to hear "Men" was voiced by an American accented reader. Jon's writing is engaging, involving and compelling but after hearing him reading The Psychopath Test or Them or Lost at Sea, any other voice feels two dimensional by comparison. While the movie tie in version is still interesting, it felt flat. Here, we have Jon giving one thing that is lacking in the other read - the depth of experience. You feel the enthusiasm of a man who was there, across the table, interviewing men who were part of this journey through "psychic soldiers" and experiments in out of body operations.

I have enjoyed Ronson's books, far more than the movies based on his articles, but this was a glaring omission to the cannon which I am extremely glad has been corrected. Thank you, Jon and Audible! Worth the cost... Looking forward to the next!

I didn't buy this audio book before because it wasn't narrated by Jon Ronson, and the other Jon Ronson audio books I had listened to led me to believe that his narration, with its solemn tongue-in-cheek ironic delivery is essential to get the full effect of his writing.

What a difference to see the program as part of a bigger picture, from another angle!

Because this book places remote viewing in a bigger category of activities, the story also references Heavens Gate, the Waco siege, MK Ultra, Guantanamo, and prisoners in Iraq and the use of various techniques such as sound or chemicals to change behavior. Also the death of a research scientist who fell out of a 10 story building in New York is reported on.

The story ends abruptly, with an unfinished feel, but that is reflective of the reality . . . and life. The book made me uncomfortable and think. If it weren't for the irony and excellent narration and research efforts . . . I am not sure I would have been interested enough to get this book. Because I really liked the previous audio books Jon Ronson published, I bought this . . . but, I learned more than I wanted to know, and feel saddened by what people do to other people . . . and animals.

This book is more sad and scary than I was anticipating. The ultimate thrust of the events is the dark side that comes with the study of the paranormal and the various applications of mind control and "enhanced interrogation techniques". I do not know what I was expecting, but the realities of how horrible the US government has been to prisoners of war and even its own citizens wasn't it.

While not bad, it is certainly not as funny as you expect from having seen the movie... or from just reading the title. I think understanding that from the start will make it more entertaining and informative, but without that foreknowledge I felt it was a downer to read.

There are three ways to experience The Men Who Stare at Goats: read, watch, or listen. Hands down, best choice is to listen to Jon Ronson recite his investigations into how U.S. military and intelligence has explored unconventional approaches to warfare -- psychics, paranormals, psy-ops; using acid as a truth serum or heroin withdrawal as a form of torture; walking through walls, making oneself invisible, dropping foes with a stare (the titular goats being test subjects, not enemy combatants).

I'm sure this makes for a good read, a superior approach perhaps in making sure you get the details right, or can refer back to them if you reach moments of confusion. I'm sure as well that the movie is a waste of time (saw it, hated it) -- for some strange reason, they chose to fictionalize it, when the very best thing about it is that it is true and that most of Ronson's interview subjects are real-life participants in the projects described.

But listening to it on audio has one distinct advantage -- Ronson's narration of his own work. If you haven't listened to Ronson before, his idiosyncratic delivery is initially challenging. But for this material (as is true for most of his books), his approach to interviews and his method of recounting them is just pitch perfect. How he gets people to open up to him is amazing, especially in this case since he's talking to military people about secret projects.

His method is to pretend confusion, pretend that he doesn't understand the more amazing things that are being told to him. Of course he does understand them, which you can tell because of the details he chooses to pursue by feigning dimness. And since much of what he is being told is jaw-droppingly incredible (in its literal sense of straining believability), his ability to narrate as if his jaw is hanging down to his chest, eyes popping and mind blowing, makes for entertaining and illuminating listening.

I love books that he author narrates and this is no exception! Robson has a deft touch for delivering all of the information you need to draw your own conclusions without spoon-feeding you what he's trying to tell you.

Bizzare and interesting. I loved it!!! Ronson has earned my favorite author badge. Get it !

Unbelievable but true story that will terrify you about the stupid things that go on in our government.

Very enjoyable and keeps you Right on the edge, wanting to hear the rest of what hes telling you. Would definitely recommend.

another bit of Ronson brilliance

never dull, truly amazing story of the bizarre insides of secret US intelligence services. not to be missed