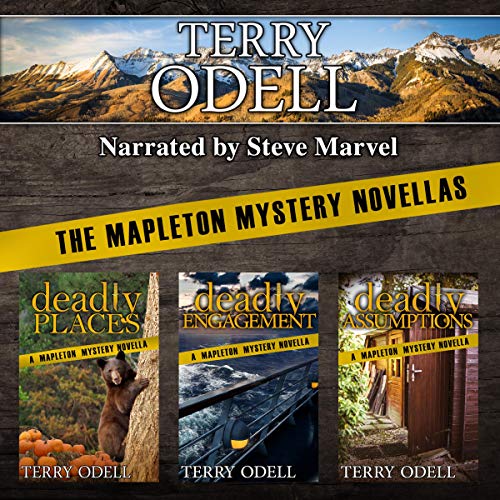 Life is a balancing act. When you’re a cop, the choices can be deadly. Ed Solomon, long-time police officer in the small town of Mapleton, Colorado, has been ribbed for thinking there’s a ring of assassins out killing deadbeat dads. However, he’s convinced these killers exist and they’re doing their dirty work from behind an innocuous-looking travel blog. Proving the ring exists has been a sideline investigation for him, but it’s shoved further onto the back burner when Ed is forced to assume the duties of Chief.

Ed loves being a cop, but the Chief Stuff is getting him down. He’s juggling his own police duties, mounds of paperwork, and keeping the mayor happy. With all the extra hours, family tensions are on the rise as well. But when someone leaves an anonymous message for him at the station, handing him a new clue, he’s determined to prove these assassins exist. Setting up a sting operation by posing as a deadbeat dad makes Ed a target. Will he catch the assassins before he becomes their next victim?

If you’re with a cop, there’s no escaping mystery and crime, even on a Caribbean cruise.
Angie Mead thinks time away from Gordon’s “Cop Stuff” is what he needs to distract him from being suspended as Mapleton’s Chief of Police and get over killing a man. A Caribbean cruise, where Gordon has no jurisdiction, seems the perfect solution - and Angie is looking forward to some fun in the sun.

Communication mishaps and Gordon’s apparent lack of interest in their getaway create second thoughts for Angie. That is, until a series of petty thefts give Gordon a new bone to chew on. When he includes Angie in his investigative way of thinking, the two of them switch to sleuthing mode, and their real adventure begins.

Will a string of mysterious trespassing incidents give Rookie Officer Ed Solomon his chance at being a big-time detective?

Gordon Hepler and Ed Solomon are reminiscing at Finnegan’s bar one snowy night, about a case that turned Gordon’s career path around and had Solomon rethinking his desires to be a big-city detective. Back then, Gordon had no intentions of being a cop, and Ed was a greener-than-green rookie police officer being trained by Arch Hepler, Gordon’s father.

In most places, people breaking into garden and storage sheds might not be a big deal, but in the small town of Mapleton, Colorado, it’s a veritable crime wave, at least according to Chief Dixon. Kids playing pranks? Or something more serious? Could these trespassers have something to do with a much bigger, big-city crime? What starts out as a perfunctory investigation soon escalates. Will Dixon, Arch Hepler, and new rookie Solomon discover the truth before Mapleton sees its first homicide in decades?