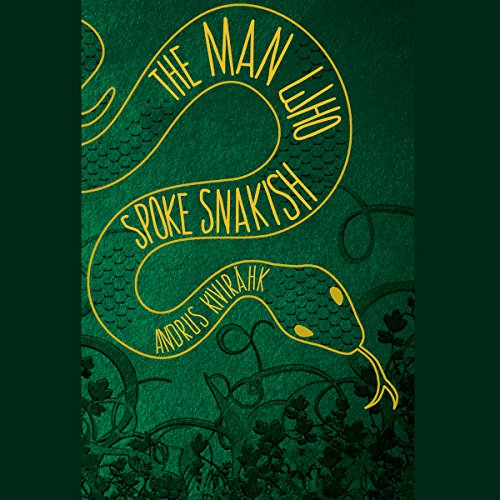 The Man Who Spoke Snakish

A best seller in the author's native country of Estonia, where the book is so well known that a popular board game has been created based on it, The Man Who Spoke Snakish is the imaginative and moving story of a boy who is tasked with preserving ancient traditions in the face of modernity.

Set in a fantastical version of medieval Estonia, The Man Who Spoke Snakish follows a young boy, Leemet, who lives with his hunter-gatherer family in the forest and is the last speaker of the ancient tongue of snakish, a language that allows its speakers to command all animals. But the forest is gradually emptying as more and more people leave to settle in villages, where they break their backs tilling the land to grow wheat for their "bread" (which Leemet has been told tastes horrible) and where they pray to a god very different from the spirits worshipped in the forest's sacred grove.

With lothario bears who wordlessly seduce women, a giant louse with a penchant for swimming, a legendary flying frog, and a young charismatic viper named Ints, The Man Who Spoke Snakish is a totally inventive novel for listeners of David Mitchell, Sjón, and Terry Pratchett.

Very good book that deals with the subject of change and things that pass over time. It's a beautifully raw written fairy tale.

I had high expectations but it was slow moving and just a general downer. I do not recommend

childish plot, silly characters. even for a fantasy the deus ex machina plot repairs are gimmicky

Narration really added a separate and more endearing element of story imagery to the author's carfully chosen words, characters, and setting. I was immediately drawn into our protagonist's struggle with humanity's daring dance to change and be the change we want to see in the world, more specifically in society. It takes peer pressure to the extreme while harkening the keen voice of J. Swift's "Modest Proposal" in all his satirical glory!

I Understand The Cult Following This Has!

Very good and I will think back on it many times for it's creativity and themes/morals. Normally I knock a star off of a very good story if I didn't feel some passion for the characters, which I did not in this book, BUT this one so strongly touched me on an emotional level regarding the points it was making about humanity and society that my norm was overridden. The characters are just vehicles for the bigger players/ideas to be shared here: when is something truly outdated, and when are we moving forward to our own detriment? When do you let go of something even when you know it's right? This would be a great book club pick if the group were up for a longer read, it comes in around 450 pgs. If you are offended by the questioning of religious beliefs this is not for you.

Loved it, narration is spotless and the book itself is a beautiful work of art.

I was hoping the story would be fantastical, based on some of the reviews that I had read, and the popularity of the book.

Instead, despite my desire to find things I liked – characters, plot, Life lessons, Social commentary - that desire was unfulfilled. At one point, the main character describes himself as being indifferent to what happens to him as well as to the world from which he came. I find I feel exactly the same.

Not worth the hours.

Throughout the whole story the women are 2D backdrops for the men in the story. That killed it for me pretty quick.

The writing is also over-explanatory and often redundant.

The speaker wasn't bad. I just didn't care for his voice.