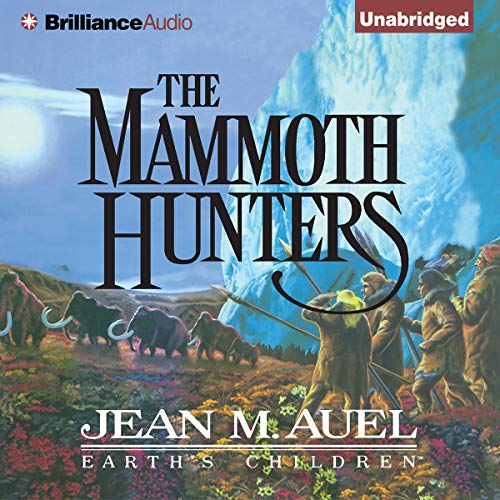 An epic novel of love, knowledge, jealousy, and hard choices.

Ayla, the independent heroine of the Earth's Children series, sets out from the valley on Whinney, the horse she tamed. With her is Jondalar, the tall, handsome, yellow-haired man she nursed back to health and came to love. Together they meet Mamutoi - the Mammoth Hunters - people like Ayla. But to Ayla, who was raised by the Clan of the Cave Bear, they are the "Others". She approaches them with a mixture of fear and curiosity.

It is the Mamutoi master carver of ivory - dark-skinned Ranec, flirtatious, artistic, magnetic - who Ayla finds herself drawn to the most. Because of her uncanny control over animals, her healing skills, and the magic firestone she discovers, Ayla is adopted into the Mammoth Hearth by Mamut, the ancient shaman of the Great Earth Mother.

Ayla finds herself torn between her strong feelings for Ranec and her powerful love for the wildly jealous and unsure Jondalar. It is not until after the great mammoth hunt, when Ayla's life is threatened, that a fateful decision is made.

At over 30 hours, this listen will last you a lot of commuting drives! I enjoyed it a great deal and just can't figure out why all the negative reviews. Yes, there is oral sex..not much and it really isn't 'bad', but loving. Much better than the brutal attack on our heroine by the mean guy whyo rapes her. The sex in this book is very loving and simply part of the story. AND, I don't think a bit of sex turns a historical novel int 'chick lit'..really guys...get over yourself. Also, many people seem to resent the author repeating significant points from the first 2 books. I have read that Auel wanted each to be a 'stand alone' book, and thur the need for repetition of the information on material already covered in Books 1 and 2. I didn't fine it at all annoying..iy is just part of the story line.

I was most impressed with the extrapolation writer Auel has done to flesh out her characters, their society and rules and mores. We can't really know what the Clan or the Others were really like, but Auel has made their society into one that sounds much like any large family group. I especially enjoyed the summer gathering, where there is always and nasty uncle Ned and a bitchy aunt Bertha. The ritual around making young girls into women is well written and very believable, IMO.

I'm glad I purchased the 4th book of the series, even though, again, there are a bunch of negative reviews. I agree that the first 2 books were hard acts to follow, but I'm also glad Auel has done some changing up of the directions of the story.

If you've enjoyed 'Clan of the Cave Bear and the 'Valley of the Horses" I'm guessing you'll also enjoy 'The Mammoth Hunters".

Ayla is my HERO!

I absolutely love the story, that's why I listen to it so much, Ayla is my hero!

Green-eyed monster gets the better of Jondalar

I read the first three books as they originally came out, when I was a teenager. I loved them all, especially Clan of the Cave Bear. Revisiting them as audiobooks recently, I was reminded how annoyed I got with the forced plot devices (in Book 2 and this one) of the long, drug-out misunderstandings between the two main characters. For such smart beautiful perfect people, they could sure be stupid.

I'm writing this review from the perspective of having just started Book 5 of the six-book series. I have to say, Clan of the Cave Bear was absolutely the best and strongest, and the series declines steadily after that. That's not to say it's not a worthwhile series, involving an absolutely stupendous amount of research. But for those of you who have yet to experience the change in narration in the audiobooks starting with Book 5, I must warn you that you may be tempted to do what I am struggling with right now, which is to return the last two audiobooks and get the print versions instead. I've got too much invested in the first four books, timewise, to abandon the effort now.

What would have made The Mammoth Hunters better?

I should have payed attention to the other reviews.
This one is a return.

Would you ever listen to anything by Jean M. Auel again?

Yes, this one was a bomb.

Would you listen to another book narrated by Sandra Burr?

A waste of time

This book seriously needed a good editor. The constant repetition of the same storyline over and over gets ridiculous!
I can understand a reminder or two from previous books, lots of authors do that, but this author spends a third of the book repeating the same details. I also really dislike that the storyline has spiraled downward from prehistorical fiction to poorly crafted romance novel. I hope this trend doesn't continue.
The narrator is horrible, she sounds like she is reading a child's fairytale book. (Think of a nursery school reading of Momma, Poppa, and Baby Bear's lines.) Her depiction of the voices of nearly everyone in the Lion camp is exactly the same, and all are overenthusiastic caricatures.

I liked Clan of the Cave Bear, and thought The Valley of the Horses had some good parts. This book, however, holds virtually no appeal. I gave it two out of five stars because you might get two hours of entertainment out of each five hours of listening.
I will give the fourth book a try because I'm stubborn about finishing things, but if it reads like this one I am done with this series.

Great insights but fades into prurient

I read these novels when they were first published, when I was working towards a BS in Biology. My faculty adviser recommended Book 1. I was young when I first picked up the books in this series, and loved the whole series. I had never read romance novels, so I guess I was naive. Revisiting the series 20 years later, I realize the constant sex scenes are repetitious in the phrases, settings, circumstances, and dialog to the point of being boring, akin to romance novels that fill voids with prurient content. The effort to make each novel "free-standing" is distracting and boring, and shows that the editors think that the reader is so stupid as to not remember, and hope they can make additional profits when the bookstore browser picks up a book in the middle of the series.

Ms. Auel has produced a great work of historical fiction for an era rarely tackled, except in approximation in fantasy novels. I'm sorry she chose to switch genres from historical fiction to romance novel with gratuitous sex and endless reprise.

Not my favorite in the series

The constant revisiting of the love triangle inner conflicts along with the gratuitous sex scenes that are tedious and tiresome do not contribute to the tapestry of a story artistically told within this series and made this book much longer than necessary. Once the contrast between the brutality of Broud and the evolved others right of passage for young women was established, this aspect of this story was really unnecessary. In the book it was easy enough to page past it but in the audible version it was not as simply passed by.

it would be a much better story without the constant relationship insecurities betwen ayla and jondalar.

Would have been better without all the romance novel idiocy

Very frustrating and unnecessarily long. Could have been much better. But the series has a strange fascination with all the Ice Age cultural detail.

AYLA HAD NEVER LEARNED TO LIE

Before rereading this, I had this down as a five star read. I first read this in the eighties and like another reviewer I was young and had never read a romance novel before. I had remember that Ayla was uncommonly beautiful, but forgot that Jondalar had a member too large for most women. Matter of fact in book 2, he was often chosen for the deflowering ceremony, seems either a little unfair to the virgin or to the man who comes after Jondalar and his massive member.

Neanderthal
There is a lot here on racism, but it is not aimed at Ranec, the dark skinned traveler from the south. Ranec is seen more as a novelty and the randy human women want to make sure he is all man. He of course is willing to prove his manhood. Jondalar and Ayla fight, because he is ashamed of her upbringing. Ayla is a strong woman who is not going to deny her foster parents or take any crap about them. Ayla is driven to the arms of Ranec, which she can't help due to her upbringing. Clan women do not deny a man and his needs (the good old days).

This is not as good as the first two, but still worth your credit.