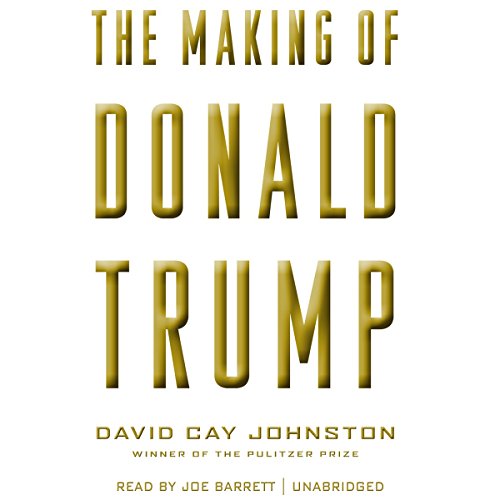 The Making of Donald Trump

The culmination of nearly 30 years of reporting on Donald Trump, Pulitzer Prize-winning investigative reporter David Cay Johnston takes a revealingly close look at the mogul's rise to power and prominence.

Covering the long arc of Trump's career, Johnston tells the full story of how a boy from a quiet section of Queens, New York, would become an entirely new and complex breed of public figure. Trump is a man of great media savvy, entrepreneurial spirit, and political clout. Yet, his career has been plagued by legal troubles and mounting controversy. From the origins of his family's real estate fortune to his own too-big-to-fail business empire; from his education and early career to his whirlwind presidential bid, The Making of Donald Trump provides the fullest picture yet of Trump's extraordinary ascendency.

Love him or hate him, Trump's massive influence is undeniable, and figures as diverse as Woody Guthrie (who wrote a scathing song about Trump's father) and Red Scare prosecutor Roy Cohn, mob bosses and high rollers, as well as the average American voter, have all been pulled into his orbit. Drawing on decades of interviews, financial records, court documents, and public statements, David Cay Johnston, who has covered Trump more closely than any other journalist working today, gives us the most in-depth look yet at the man who would be president.

Shines a light into a very dark history

This is a book more people should have read before November 8, 2016. Johnston is an investigative journalist who has been covering, among other things, Trump since the 1980s. In this brief but powerful book, he highlights the most relevant aspects of Trump's personality, tendencies, and dealings as they might apply to his tenure as president. Published months before the election, it should have served as a warning to the type of man (in personal interactions and in business) that was on the cusp of the presidency. In the decades Johnston has reported on Trump, some character traits are consistent--willingness to ally with questionable or outright criminal elements, narcissistic boasting, a pathological need for loyalty at any cost, a love of revenge, volatile emotions, a loose and sometimes absent relationship with the truth, deception about his education and wealth, crooked business and tax dealings, and unsettling views on women. In short, perfidy appears to overwhelm most parts of Trumps life, past and present. Would reading this book have changed people's minds? Maybe not; most of the revelations here are not new, they just have more heft because of their concentration and documentation. My only quarrel with the book is at times it was repetitive and some of the chapter structures were hard to follow. But Johnston has the punchy and straight forward style that the best journalists employ to keep the reader interested without muddying his points. And his subject, while distasteful, is never boring.

It told everything I knew to be true of Trump and then some. What a dispicable human being. And, he's our president. Sad!! I never thought this country could sink so low.

this is no more than hate based writing meant to increase fear and discontent in the American people.

Good, but could be better

If you are interested about Donald Trump, I would recommend first reading The Truth about Trump. 85% of this book's content is contained in that book and is properly put in context.

I listened to the author of the Making of Trump on a Point of Inquiry podcast, and I was very impressed and I couldn't wait to buy this book. This book has some good content and it's narrative of the Japanese Whale is absolutely excellent. However, it looks like this book was rapidly put together and it comes across as a series of disconnected vignettes which is more of an indictment of Trump and less of a narrative or explanation of why he behaves the way he does.

I think if the author spent more time on this book it could have been an excellent book. That being said, I do realize the author did want to get this book out before the November election.

FANTASTIC AND FULL OF FACTS

Timely message. I would have thought it was written a month ago. SUPERB!! Well written and very factual. This author did his homework. It's as if he lived with Donald for years because he knows him so well. much of what he stated about Donald still holds true til today.

Would you listen to The Making of Donald Trump again? Why?

I could see coming back to this book as the Pres-Elect works his way through his journey as the 45th. It's a challenge to fully believe some of the outlandish behavior highlighted in this book, it truly does seem fictional but his behavior during the campaign makes one wonder what the next 4 years will be like.

This turned out to be a good book for a 5.5 hour drive, not a snooze fest but certainly a question generator for someone looking for more information on a substantially controversial political figure.

UNOFFICIAL WARNING You may not want to listen to this book if you have neck problems you could find yourself shaking your head uncontrollably:)

No wasted ink on these pages. They barely read with more continuity than a bullet list, which isn't necessarily a bad thing. The details that are present are useful, and paint a disturbing picture of the man who would be president.

Everybody needs to read this book

oh my what have we done?

Too scary for me to describe, I think we made another big mestake? God help us

I can’t finish listening....his voice is just too creepy for me. I’ll try later

Trump fans will hate that book. But then again Trump fans are no book readers and certainly not interested in any facts about their idol.
However, if you want to know who that guy is who stumbles from scandal to scandal and creates new enemies by the hour, then read this book. It shows in painstakingly assembled details and an easy-to-read style how the family fortune was accumulated from the very beginning through illegal and criminal activities, how grandfather, father and son have faithfully followed the motto: Why make an effort if you can just as well deceive, cheat and defraud others and make money in the process? It also shows that bullying has been Trump’s favorite pastime ever since he was a child. Only the methods developed from throwing stones at a toddler to threatening people with lawsuits and politicians with twitter feeds.
And this is precisely what gives this book its credibility. If there had been anything in it that Donald Trump’s army of lawyers could have disproved, Trump would have sued as he did in other cases. What has surprised me time and again since I listened to that biography is that the news unveils now sensational facts about the bully in the White House which have been told extensively in this book when it first came out many years ago.
When you have read that book, you will know all you need in order to understand the goings-on in the White House and predict the future behavior of a man whose unscrupulous, egocentric character is a constant, hiding behind a mask of empty, populist slogans and lies. You will also understand that running for and becoming the president was perhaps his biggest mistake ever as now not only Robert Mueller but also an army of amateur detectives will look into his affairs where they will have a field day with all the illegal and frankly criminal activities he was able to keep at bay in the past through court cases and sealed settlements. From his first days in office people in his entourage have leaked to the press as never before and while he keeps attacking everyone and blaming others for his shortcomings he will create more leaking all around.
The book states a number of court cases in which the judgment seemed extremely biased with Trump even bragging about paying off relevant officials. If only some of them are exposed as unduly influenced, the Republicans will drop him in order to save their own political credibility.