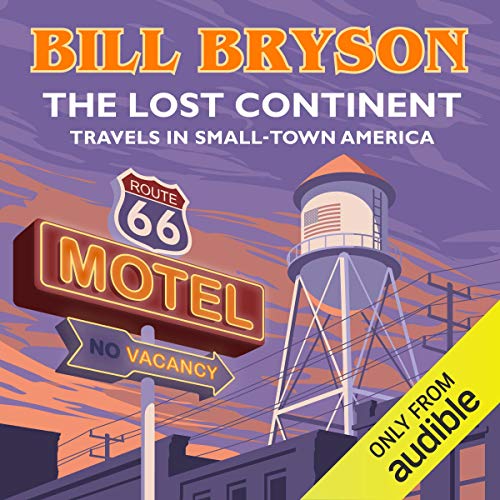 Hardly anyone ever leaves Des Moines, Iowa. But Bill Bryson did, and after 10 years in England he decided to go home, to a foreign country.

In an ageing Chevrolet Chevette, he drove nearly 14,000 miles through 38 states to compile this hilarious and perceptive state-of-the-nation report on small-town America.

From the Deep South to the Wild West, from Elvis' birthplace through to Custer's Last Stand, Bryson visits places he re-named Dullard, Coma, and Doldrum (so the residents don't sue or come after him with baseball bats). But his hopes of finding the American dream end in a nightmare of greed, ignorance, and pollution. This is a wickedly witty and savagely funny assessment of a country lost to itself, and to him.

I have listened to every one of Bryson's audio books here on Audible.com.

I really like Bryson. He makes even the most mundane topics engrossing.

And it's not that he completely hates America. A Short Walk where he talks about hiking the Appalacian Trail is wonderful and very positive.

But in this early book his nastiness on American is not just palpable, it's suffocating.

In addition, instead of Bryson's warm, folksy reading that I have come to enjoy, William Roberts's reading makes even warm thoughts on America come out snide and snarky.

I pushed myself to listen to the whole thing so I would feel entitled to write a review.

But if I could, I would have rewound the tape to erase it from my brain.

There are better Bill Bryson audiobooks

Have the older, kinder Bill Bryson go back in time and take this journey. While some of his commentary was both hilarious and heartwarming, like many other reviewers, I was startled at how mean-spirited this book could be in comparison to Bryson's later works. He is comparatively positive about Iowa and the Midwest, as he waxes nostalgic about his childhood in Des Moines (and as an Iowan myself, I both confirm his assessment of our state and breathe a sigh of relief that his memories were good ones!) His commentary on other regions, particularly the South and Appalachia, was gratingly negative. Perhaps he was still in the process of finding his comedic voice, but I often found myself sympathizing with the unassuming and often kind people he was lampooning. The reader choice did not help matters any.

What other book might you compare The Lost Continent to and why?

Neither Here nor There: Travels in Europe.

This is Bryson at his most...curmudgeonly...and William Roberts was perhaps not the best narrator for this task. My first encounter with this book was of the dead trees variety; I noticed the negative tone then, but Roberts seemed to draw it out in the worst way, making the narrator seem even more smug, arrogant and rude, when Bryson's voice tends to be more self-deprecating and light-hearted. The advantage of this version is that it is unabridged; perhaps I was better off with my old beaten-up paperback, read in my head with Bryson's less irritating voice.

Was The Lost Continent worth the listening time?

If you are a Bryson fan, perhaps try to find a version that he reads himself.

On the whole, I would still recommend the book, but not as an introduction to Bill Bryson if you haven't read any of his stuff before. He's less of a jerk in his later books, so if you've read Neither Here nor There, A Walk in the Woods, or Life and Times of the Thunderbolt Kid, you'll approach The Lost Continent in a more forgiving mood. This is his first major book, and he's still honing his voice.

It's also worth listening to simply because you can see the connections between his travels and topics that he covers in his later works, for instance, his near-visit to the Biltmore Mansion vis-a-vis his lengthy treatment of the Vanderbilt family in At Home: A History of Private Life. Don't expect that level of research in this book--this is primarily a travelogue--but it is interesting to get a glimpse of the context behind some of his more recent nonfiction books.

Not one of my favorites

This is one of Bryson's earliest books, published in the late 80's. As such, it lacks much of the humor that balances his snarkiness, leaving a book that seems to have been written by a curmudgeon. Americans have a lot of issues, but I found the book mean spirited. I also couldn't figure why he chose to travel during the cold, rainy season when some of the prettiest parts of the west weren't accessible. Maybe he wanted a better comparison with life in England.

Bill Bryson bitches his way from coast to coast!

I barely finished this. I love Bill Bryson, and maybe his own narration would have saved this for me, but the incessant whining and kvetching about the state of the union read so emphatically was trying. Maybe this was novel and clever during the Regan Administration (when this was written), but it's tiresome now. Not nearly as informative as his other works, either. Too bad I saved it as the last of his books to listen to. He's better on foreign soil, in his own voice.

As a longtime devotee of Bill Bryson, I was hugely disappointed in this book. Mr. Bryson somehow left his sense of humor on the dock at Liverpool and returned to America expecting to be disappointed, disillused and dismayed. He was not disappointed. His journey throughout the heartland, south and west of the United States is related in condescending, humorless, and unforgiving fashion that leaves the reader wondering why he did not catch the next plane back to the UK. Predictably nothing he finds approaches the quality, charm, beauty or intelligence of the UK or Europe for that matter. It is an unhappy journey amongst people he finds it impossible to respect and through a land barren of charm or beauty. Worst of all, Mr. Bryson does not narrate this but it is done by Mr. Roberts who seems to turn even the slightest bit of humor into a long, cold look down his long English nose. I couldn't wait to finish this audiobok and would not recommend it to anyone not looking to bash the US at every turn.

Bill Bryson's ability to sum up a character in a few well-chosen words, combined with his insight into the American psyche, make this a highly enjoyable and easy-to-listen-to book. I loved it - from beginning to end.

What made the experience of listening to The Lost Continent the most enjoyable?

What other book might you compare The Lost Continent to and why?

Down under by Bill Bryson (as well)

He is a great reader by any standard.

Every bit as good

As all the others he's released. Insightful and funny.

I had no idea who he was.

My girlfriend suggested I listen to this and I had my doubts, but I figured I had little to lose as I am always looking for a good book to listen to. I listened to this while doing a 1000km drive through my home province and a lot of what was being said really sank in and made me laugh. It's a dated book but very good.

One of Bryson's better books.

The author and narrator were great. Much credit to both who made this book very enjoyable on a roadtrip myself.

Not a single boring sentence

A review is supposed to be at least 15 words, so here they are, just to allow for summarizing my experience in the title.

must read before a visit to the states so you don't forget your sandwiches or have your food spit in ;-)