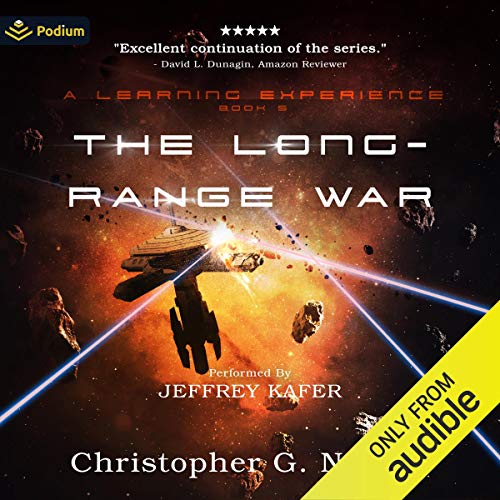 The gloves have finally come off.

The Tokomak, the unquestioned masters of the galaxy, have dispatched a massive fleet to crush the Solar Union - and the fledgling Galactic Alliance - before the human race and its alien allies can tear the galactic order asunder. Hundreds of thousands of starships under the command of an alien tactical genius, bent on exterminating the entire human race...the darkest hour is truly at hand.

Admiral Hoshiko Stuart has a plan. The Solar Union will dispatch a fleet of its own, with the objective of smashing the alien fleet before it reaches Sol.

But, as human technology clashes with alien treachery, experience, and sheer numbers, it becomes clear that there can be only one victor...and whoever loses will lose everything.

Narration is a perpetual 1000 yd stare of dramatic

Love the storyline but physically cringe at the narration. Kafir should consider starting an emo folk band or narrating Edgar Alan Poe books.

Unfortunately, Mr. Kafer failed to bring out or add depth to the characters and story. What I’ll remember is listening to 10 hours of monotone where every character sounds the same.

As an avid fan of the authors, I have to say I enjoy almost every book he has put out, from this, to Ark Royal, to the Empires Corps and this is not exception. Nothing is as painfully sad as when I binge out completely all I have from this author.

I love this series.

I have no idea why this was referred to me as conservative sci-fi. if anything the system they have ones like a lot of sci-fi universes.

the random diggs at liberalism kind of make no sense considering the amount of liberal policies in place in the system but they're often digs I have against liberalism myself despite the fact that I identify as progressive.

it's also clear that the author has never met somebody from the ghetto. but I love the series anyways. I love to see a long form TV series anthology style in a way.

Some phrases and ideas are repeated. One can...

...have the greatest ideas and phrases but why repeat that the story contains the great phrases and ideas because i HAVE HEARD the same ideas and phrases.... over and over. if i hear one more character inner monolog about the size of Topamak fleet over Human fleet i will gag.

Oh, we’ll smash them, oh they smashed us

I have low standards for entertaining reading, be easy to hear, and move along and a decent review. I like the series, narrator and characters, had to force my way through this screen play, oh not even that since the descriptions were so parse you couldn’t even set camera angles, and the dialog was redundant reports and acknowledgements. All other was internal thoughts. So many characters repeated tired cliches, just not good enough an effort. First half of the book was a continual rehash of the strategic situation.

I liked the book, the Peformance was realy good,
The any problem is the wait time between books, a year between books is too long. I would like to see more book alot fast.

Jeffrey’s overused and dramatization of “ and yet.....” space space space was really annoying throughout all of the books he narrated

It's the best I n the series so far.

the last one was the best in the series. But the tale the stotler went with bothered me. With the ultra xenophobic uktra conservative culture of the world today, these type of books that tend to glorify that ideology are just acting fuel to the flames.