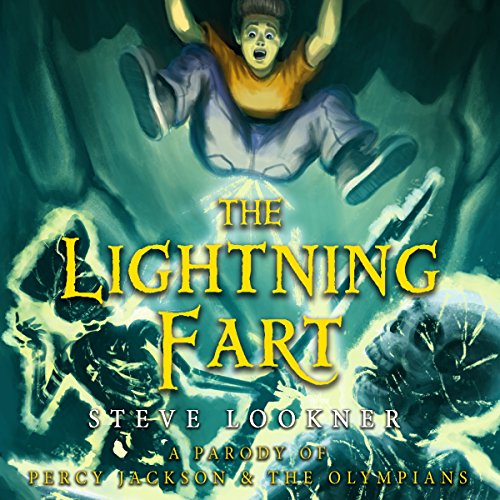 Meet Percy Stinkson. He's just a normal kid, trying to have fun and make it through school doing as little homework as possible....

until he finds out he's the son of a Greek god! And Percy's father isn't just any Greek god. He's Pooseidon, God of Farts!

Percy's life is totally transformed as he travels to Camp Half-Wit, where he's trained to use his special farting powers. He's going to need these powers, because he soon learns it's up to him to save the universe by going on a quest to find Zeus's stolen iPhone!

It'll be a dangerous quest, but Percy will have company: Grover, a weird kid who thinks he's a half-goat, and Annabeth, a super-hot girl who unfortunately doesn't want to date Percy. Yet.

There'll be loads of action and tons of smelly farts as Percy's quest proceeds to its exciting conclusion: a showdown in the Underworld with Hades himself!

The odds might be against Percy, but don't give up hope, because he'll have the ultimate weapon at his disposal: The Lightning Fart!

Can a fart really save the universe?

Find out...in this hilarious parody of the Percy Jackson books, THE LIGHTNING FART!

Steve Lookner is one of Amazon's top parody authors. He began his writing career as an editor of The Harvard Lampoon, and has written for TV shows such as Saturday Night Live and MADtv. Be sure to check out Steve's other parodies on Amazon, including The Maze Bummer: A Parody of the Maze Runner, and City of Boneheads: A Parody of City of Bones (The Mortal Instruments, Book 1).

This book is very different from what I usually listen to, so it's hard to compare. The reader is better than most--obviously a trained actor with lots of expression.

In the tradition of Bored of the Rings, this Percy Jackson parody had me laughing along all the way through. I was surprised how closely it followed the original book. So if you're a fan of the series, all your favorite scenes and characters are here.

Who better to read a Percy Jackson parody than Brian Holden of Team StarKid fame (A Very Potter Musical)? Chicago comedian Holden strikes all the right notes and provides brilliant voices for the distinct characters. I felt like I was watching this book happen in front of me rather than just listening to someone read! His inflection and tone matched the book perfectly. I definitely want to hear him read more!

It's not so much that I was moved, as that something moved within me.

I was very impressed that the author kept this clean enough for the kids who read Percy Jackson. Even though it's all about farts, it never goes over the top into really gross territory. My 11-year-old will definitely enjoy it.

It's just so funny! If you love Percy Jackson, you have got to hear this!

My 12 year old daughter and I are huge Percy Jackson fans and this parody of the first book had us laughing. We loved his fart power and the changes in the personalities of the characters. There was even an unexpected twist at the end. There were a few parts where the writing was a bit more crass than I like for my 12 year old. When I said I didn’t like these parts, she of course rolled her eyes at me. We would love more good quality parodies like these!

This book was cringy, gross and the speaker was boring. It lays the “jokes” on way too heavy. Yes we know it’s a parody but did you have to emphasis every single “joke”? I couldn’t even get through the first chapter. 0/10. I wouldn’t recommend this to a dog

To the person who said that you can not delete the book, their is a way, but I will not anyway.

I laughed in the middle of the bus; it was so funny. If you just need a break this is a good chance.

If you are looking for a silly short story and know the Percy Jackson books already, this is the book for you. Clearly, bathroom humor will be found just based on the title of the book. Warning it probably should be at least PG-13 because there are some thinly veiled sexual connotations. Not horrible, but enough to be uncomfortable at times.—mother of 12-year-old

This is the worlds worst book my child listen to it so much it got so annoying I do not recommend this to anyone I hated this book I tried to delete it but you can't so please don't buy this at all.