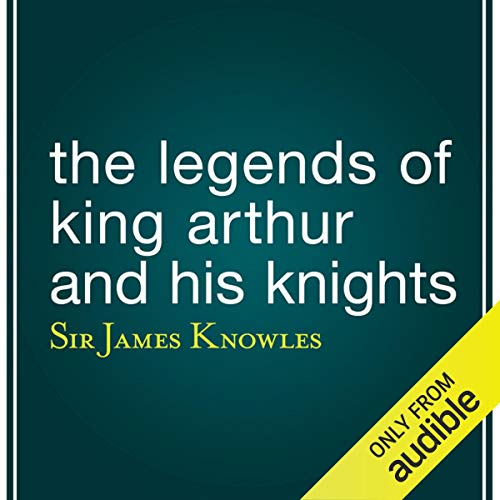 The Legends of King Arthur and His Knights

Many authors, from Geoffrey of Monmouth in the 12th century through the romantics and up to current times, have interpreted the King Arthur story, mixing mythologies and legends with history, religion, and magic. Here is Sir James Knowles’ 1860 take on Arthur. Knowles, living during the Victorian revival of Arthur, gives a story of nobility and gallantry. Arthur appears in his classic adventures and battles emphasizing the concept of Arthur as an English origin myth. Not, perhaps, the most remarkably written entry in the world of Arthur, this volume makes up for lack of style with action and heroism. Eric Brooks has fun with his performance in this audiobook, creating colorful characterizations and exaggerating the drama almost to the point of playful caricature.

King Arthur was a legendary British leader of the late fifth and early sixth century who, according to the medieval histories and romances, led the defense of the Romano-Celtic British against the Saxon invaders in the early sixth century. This book gives an account of the life of this great legend of all times.

Tales of knights and fights

This is an interesting collection of battles. The wording is a bit outdated, but I feel it sets the mood appropriately. Anyone who is expecting this to be like any current day writings or film may be disappointed by the style or find it difficult to digest.

Changing the narrator could have improved this book.

Would you recommend The Legends of King Arthur and His Knights to your friends? Why or why not?

His voice was not my taste for a good listen. He was sometimes hard to understand, and his voice did not flow.

Decent reading of the classic version

Why so much hate? This is the oldest and most accurate compilation known to England!

Language and terms are tough to follow at times and require a dictionary at hand while reading. The legend is one that should be well known and read because classics are cherished by many avid readers.

Not sure what I expected...

The narration was excellent. They language used was charmingly amusing but I like the show Merlin better 😂

If you like to have to guess at the first word of a passage, this book is for you! Utter waste of a credit. Listened for 30 seconds, no thanks.

the book is a classic but I can not listen to the narrator , not ever so sad

The book is mostly one war or Joust after another. The Real treasure here for me was the performance of Eric Brooks, who gives much life to the store!

I couldn't finish it. It was not the story of King Arthur I was expecting.

I'm sure the knights back in the day, just went around looking for a fight, but they all started sounding the same. Maybe if you have a lot of time on your hands or are way into the whole Knight thing you'd like it.

The reader was so slow, it made it drag on as well.