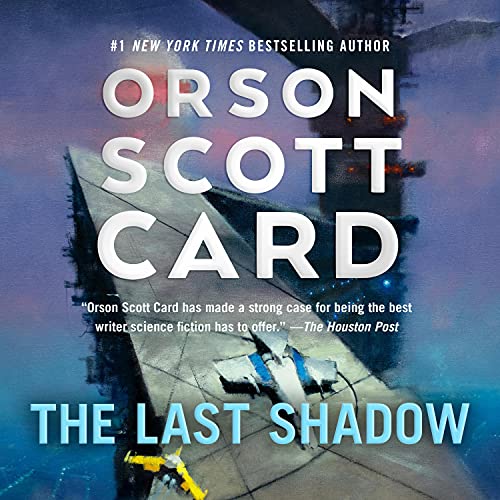 Orson Scott Card's The Last Shadow is the long-awaited conclusion to both the original Ender series and the Ender's Shadow series, as the children of Ender and Bean solve the great problem of the Ender Universe - the deadly virus they call the descolada, which is incurable and will kill all of humanity if it were allowed to escape from Lusitania.

And one deadly virus that could wipe out every world in the Starways Congress, killing billions.

Is the only answer another great Xenocide?

Orson Scott card should be ashamed of himself.

If you are a fan of the ender or Shadow series do not read this book! I can promise you that whatever you imagined it would be, it isn't. Moreover whatever you imagined is almost certainly better than this lazy, clumsy, dumpster fire of a novel. I think Orson Scott card must have gotten the same brain parasite that got George Lucas just before The phantom menace...
I will never get those hours back. please don't do this to yourself.

The Last Shadow is 95% pointless drivel and 5% thought-provoking narrative. Essentially, the story is about Bean’s egocentric children, magical birds, and simple morality expressed via squabbling and trite dialogue. Also, half of both the narration and sound quality is terrible. Rudnicki, Brick, and the magical bird guy did the better half. One of the women clearly recorded her parts on a cellphone voice memo app.
Disappointing to say the least.

At least now it's over.

I've read all the books in the ender verse and have stayed devoted till The bitter end. Unfortunately, this book is indeed a bitter end. The book Lacks any kind of compelling story, the characters are not as interesting as I would hope, and the actual tension in the story not only does not get resolved but at points is so glaringly idiotic that I can't believe I read all the previous books. I don't know how the same author as ender's game produces a book this bad. The only thing that can be said for this book is that I no longer have a desire to read anything else in the ender verse.

A dud of a book

A real let down. Orson Scott Card's heart was not in this one. You can't blame the narrators, only the author.

Attempt to ruin the enderverse

I can forgive the audio fillers, what seem to be edits or additions with a different audio. I cannot forgive the pointless, uninteresting and just boring nature of this book. I am very disappointed OSC felt the need to combine all his interests, religion birds and several of his other franchises, to create a horrible addition to the enderverse. It is a major disservice and reveals he is an author not worth the readers time.

Not a satisfying ending to an epic

This felt more like a detour than the conclusion to such a great franchise. Even the side stories of the Ender-verse are more entertaining and fulfilling than this. It's very unfortunate and I hope that OSC can let another author can pick up the reigns and do a more truer ending justice.

After 20 years this is what you came up with??? Very slow going, silly story line and no real ending to the story. Nothing at all like the quality of Enders game and the other books that went with it.

I love almost all of OSC's books; however, this is an extreme disappointment. It exceeds Shadows in Flight in boringness and puerile ridiculousness. It breaks several established rules. It's as if Card didn't read, or listen, to his own books.

The entire time spent with the birds is wasted time and could be dropped completely. Granted, I've 6 hours left to listen, but I doubt it'll get any better.

We've waited so long for a poor story.

The performance made the hours fly bye. The story wasn't the best in the series, but if you have read/listened up until this book, do you really have a choice?

The characters were unrecognizable from previous books. Story threads so built upon in previous books not addressed at all like the artificial wombs of the antonine ship, the world ship and the drones. Overall the build up to this book was pretty big and the results just dont measure up