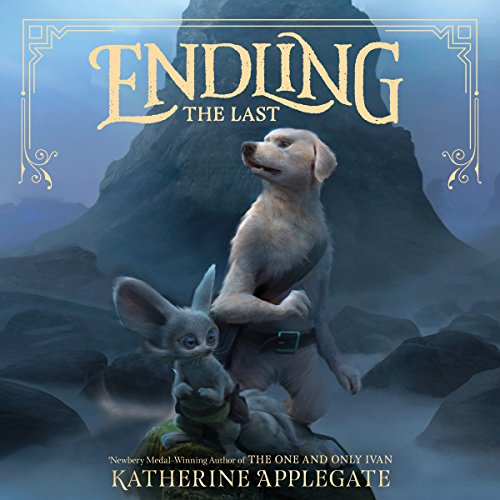 First Katherine Applegate thrilled listeners with the action-packed Animorphs series. Then she stole our hearts with the award-winning The One and Only Ivan. Now she takes us on an unforgettable journey in this first book of an epic middle grade series!

Byx is the youngest member of her dairne pack. Believed to possess remarkable abilities, her mythical doglike species has been hunted to near extinction in the war-torn kingdom of Nedarra.

After her pack is hunted down and killed, Byx fears she may be the last of her species. The Endling. So Byx sets out to find safe haven, and to see if the legends of other hidden dairnes are true.

Along the way, she meets new allies - both animals and humans alike - who each have their own motivations for joining her quest. And although they begin as strangers, they become their own kind of family - one that will ultimately uncover a secret that may threaten every creature in their world.

Building upon the success of her critically acclaimed novels such as The One and Only Ivan, Crenshaw, and Wishtree, while also returning to her action-packed fantasy roots of Animorphs, the Endling series is Katherine Applegate at her finest. With its enthralling characters, unique setting, and gripping adventure, this series is perfect for fans of Rick Riordan, Brian Jacques, and Tui T. Sutherland.

I loved this book. The creatures were very original, imaginative and wonderful. I wanted more.

A Plethora of Action

What an amazing journey... full of suspense and action. I listened to this on audible. When I read the book, "The One And Only Ivan," I thought about how Applegate captures the world Ivan lived in, and how touching the story was. After hearing that another book came out by Katherine Applegate, I knew I'd love "The Last: The Endling" I'm looking forward to reading the other books in the series.
- Justin, age 11


I would say you can't really go wrong with middle grade stories because they are so magical without any unnecessary complications which makes them light and mostly enjoyable
The story is about a magical world where tgere are several species who rule the world, Byx our main character is a Darien a dog like creatures who can walk and talk like human .. one day she returns home just to find out everyone in her tribe is dead and she is the only one left of her species .. an Endling, so Byx sets on a journey to find out if she is the last one of her kind with a set of unlikely friends.. a human named Cara and a Topple and felevate and a horse .. what will happen to them?
this book was recommended to me by my friend Abdulla and it was a nice story .. I would say there were bits a I didn't fully enjoy ib the book but overall it was a nice book to read and now I will be reading the next book to see what happens :)

The narrator was really impressive and I liked her performance a lot .. you will enjoy this boom if you are in the mood for it

Seemed lame at first, but I decided to give it a try so I downloaded it and was not disappointed. The character development is good but other than the fire knight the villains lacked a sense of threat, I feel like there should have been more violence or something to make us fear them- but this is probably a kids book so I get it. Would recommend!!

listened with the kids 10 and 12 (and a 5 year old when they wanted to listen) they enjoyed the story and asked many questions about the tougher vocabulary in the text.

1.2x is the perfect speed for the text

Excellent story. Great performance. Kept kids and parents enrapt! Another wonderful title from Applegate. Can't wait for the next book!!!