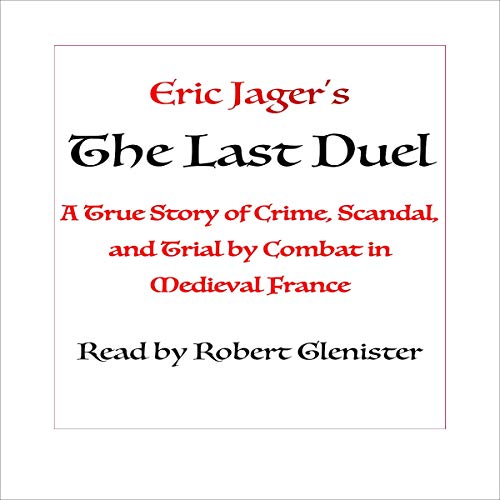 “A taut page-turner with all the hallmarks of a good historical thriller.” (Orlando Sentinel)

The gripping true story of the “duel to end all duels” in medieval France that pits a knight against a squire accused of violating the knight’s beautiful young wife, soon to be a major motion picture with Ridley Scott directing stars Ben Affleck, Matt Damon, Adam Driver, and Jodie Comer.

In the midst of the devastating Hundred Years’ War between France and England, Jean de Carrouges, a Norman knight, fresh from combat in Scotland finds his wife, Marguerite, accusing squire Jacques Le Gris of brutally raping her. A deadlocked court decrees a “trial by combat” that also leaves Marguerite’s fate in the balance. For if her husband loses the duel, she will be put to death as a false accuser.

While enemy troops pillage the land, and rebellion and plague threaten the lives of all, Carrouges and Le Gris meet in full armor on a walled field in Paris. What follows is a fierce duel before a massive crowd that includes the teenage King Charles VI, during which both combatants are wounded - but only one fatally.

Based on extensive research in Normandy and Paris, The Last Duel brings to life a colorful, turbulent age and three unforgettable characters caught in a fatal triangle of crime, scandal, and revenge. The Last Duel is at once a moving human drama, a captivating detective story, and an engrossing work of historical intrigue with themes that echo powerfully centuries later.

"Jager spins a complicated and sanguinary tale with the skill of an accomplished thriller author.... Sex, savagery, and high-level political maneuvers energize a splendid piece of popular history.” (Kirkus Reviews)

“Succeeds brilliantly in combining page-turning intensity with eye-opening insights into the bizarre ritual of judicial combat in the Middle Ages.” (The Times, London)

“As enthralling and engrossing as any...high-profile celebrity scandal today.” (Booklist)

I'm looking forward to the film even more than before ; I can picture all the characters now that the movie was shoot .
I read the book in French on spring 2020 and now listen to this one to improve my English ; a great moment

This book combines the known history with a plausible dramatic story that’s very entertaining and thoroughly immersive. The author then follows up by disclosing a broad spectrum of perspectives on the core story, and some of the reasoning behind them. The result is that it makes me want to delve even deeper into the history, and that’s everything I look for in good historical fiction. I only wish I could find more like this.

A must read for fans of medieval France.

The author does an amazing job of painting the characters as they were, based on testimony of those who interacted with them. Unfortunately, in doing so it creates doubt for the parties involved in the trial and the testimony they deliver. This becomes apparent in the constant back and forth of historians, authors and legal
Scholars for centuries to come over the guilt of LeGris. I personally believe that margarette was in fact raped, but not by Le Gris and was forced by her husband to testify against him so that Carrouge could dismantle his friends name and legacy. It’s a sad story, where ever you land on your decision, but you should read the book and decide for yourself where your judgment falls. Hopefully the movie will be as enthralling and unbias as the book.

14th century France was fascinating and this story was absolutely awesome. Not sure if I am forward to seeing the movie adaptation or not, but the book was great.

The story is interesting, but it’s short, and the author repeats and belabors information in order to generate “more” material. It’s rather like reading a student’s paper and realizing that they’re reiterating and piling on fluff in order to make word count. The narrative voice also has an annoying vacillation in viewpoint on the affair, shifting between objectivity and partisanship. The author should have staked his position more clearly from the beginning —God forbid a history include a preface or an Author’s note! — and then stuck to it throughout. The inconsistency in perspective was frustrating.
Overall, it was decent — but the reader would’ve been better served, perhaps, if the author had removed the fluff and instead published this story with his other book. As it is, I’m not sure I can justify the expense of the other for more fluff.

This is a well thought out and reasoned response to a popular myth as to why Trial By Combat was ended in Medieval France. Jager does an excellent job of painting a human picture of politics and society of Middle Ages Europe. And the central crime story is riveting. Great read (or listen).

Fascinating story for this history fan!

While more of a history account than a novel, I was still enthralled by the storytelling and suspense built by the author. What a great listen!

The narration is rather stilted but acceptable.

The content is engaging and informative. The listener learns, in just the right amount of detail, about 14th century. Legal proceedings and weaponry.

Another fabulous retelling of medieval crime

I had read and profoundly enjoyed "Blood Royal", by E. Jager, but only chanced upon this book due to the recent movie adaptation and decided to give it a go on the strength of the author's other book.

I needn't have worried. The book is fantastic. I was glued to my phone for an entire Sunday until I finished it in one sitting. The story is meticulously researched as expected, based on contemporary 14th century chronicles and court records. The author manages to reconstruct the lives of the three main characters with considerable detail considering the intervening 750 years, and the retelling of both the crime and the duel is quite disturbing as they are described basically blow by blow. Even more interesting is the examination of the workings of the wheel of medieval justice, instance by instance, with its arrest and interrogation of witnesses, the hearings, the writs presented by the parties and the elaborate ritual and practical logistics of the organization of the duel.

The story is also very well set in its larger context of court politics and warfare, between the Hundred Years War and the Nicopolis crusade, giving a fascinating glimpse of how the lives of even the minor nobility was intertwined with the fate of king, country and the larger world. Characters whose lives and interests should have revolved essentially among the villages of Normandy turn up in Paris, in Scotland, in England and even Greece and the Balkans during the course of the story.

The narrator is very good and sets an excellent pace. I can only fault him for his pronunciation of names and places which, between the English accent and the medieval French, is sometimes a bit haphazard. Otherwise I have no complaint.

I'm very happy I picked up this audiobook and I'm considering purchasing a physical copy for my library for future reference. And I will definitely be looking out for any future publication of this author.

What an amazing story, story telling and presentation. And …. It is a true story! Wow.