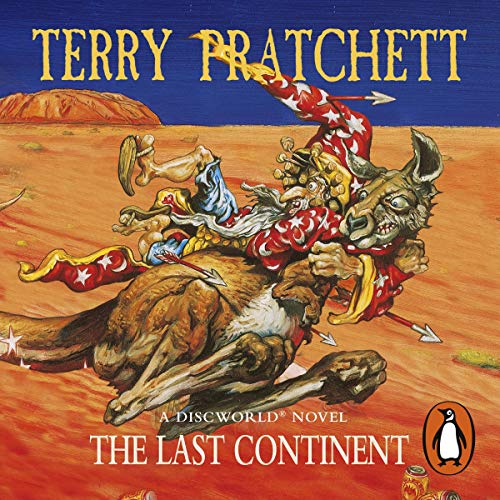 This is the Discworld's last continent, a completely separate creation.

It's hot. It's dry...very dry. There was this thing once called The Wet, which no one believes in. Practically everything that's not poisonous is venomous. But it's the best bloody place in the world, all right?

And it'll die in a few days, except.... Who is this hero striding across the red desert? Champion sheep shearer, horse rider, road warrior, beer drinker, bush ranger and someone who'll even eat a Meat Pie Floater when he's sober? A man in a hat whose luggage follows him on little legs, who's about to change history by preventing a swagman stealing a jumbuck by a billabong?

Yes...all this place has between itself and wind-blown doom is Rincewind, the inept wizard who can't even spell wizard. Still...no worries, eh?

Also, Terry Pratchett would like it to be known that The Last Continent is not a book about Australia. It's just vaguely Australian.

"Pratchett is the funniest parodist working in the field today, period." (The New York Review of Science Fiction)

"Terry Pratchett is simply the best humorous writer of the 20th century. Wodehouse, Waugh, Sharpe, etc. all have their merits, sometimes considerable, but Pratchett really is a cut above the rest." (Oxford Times)

The audio is somehow off. Really ruins the experience. It changes in pitch and volume. A little but muffled. And i have no problem with other audiobooks, so it cannot be a problem in my end.

A must read for Ozzies

Big fan of the Disk World series. Ozzies will find this quite entertaining. love it

Excellent as usual, if one of the more peripheral works, still funny and insi.

Kind of struggled to finish this one. It had some funny moments, but it really didn't reel me in like Discworld usually does.

Aussieness and wizards, could not be more perfect

Two worlds of fantacy colide with elements of Australian culture and the sublime storytelling of Terry Pratchett. Rincewind the Wizard is a charcter we love. Nigel Planer makes you feel like you are in the center of an epic adventure.

One of my top 5 favourite Discworld books, strongly influenced no doubt by the hilarious narration of Nigel Planer. He captures the Exian essence brilliantly and once again is a voice I cannot disassociate from Rincewind. He IS Rincewind! Absolutely hilarious book, I listen to it often and still can't help the giggles.

This is still one of my favourite Terry Pratchett stories. I like Nigel Planet's interpretation of the characters too.

A shame about the sound quality though. I would wish for a better recording.

I enjoy Terry Pratchett's Discworld series very much. That said, in parts I find this book drags a bit, as if there is too much in it.
However, I will read/listen to it again sometime. This is about the 4th time I've either listened to or read this book.

If you love TP, you will thoroughly enjoy this rendition of The Last Continent. As Aussies, we doubly appreciate TP's salute to Vegemite and Waltzing Matilda, and smile wryly at Nigel Planer's attempts at an Aussie accent. Cheers Mate.

Funny and amusing all the time. It's a bit random in some parts and the jokes get a little tad repetitive at the end but if you don't binge listen to it you'll be fine.

In comparison rather substandard.

The story is an incoherent mess that not even Pratchetts genius is able to untangle.