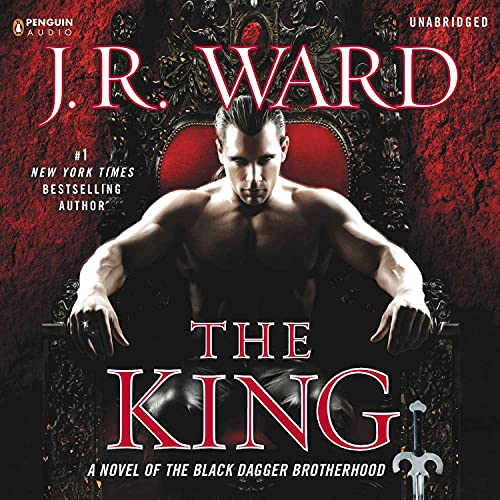 After turning his back on the throne for centuries, Wrath, son of Wrath, finally assumed his father's mantle - with the help of his beloved mate. But the crown sets heavily on his head. As the war with the Lessening Society rages on, and the threat from the Band of Bastards truly hits home, he is forced to make choices that put everything - and everyone - at risk.

Beth Randall thought she knew what she was getting into when she mated the last pure blooded vampire on the planet: An easy ride was not it. But when she decides she wants a child, she's unprepared for Wrath's response - or the distance it creates between them.

The question is, will true love win out... or tortured legacy take over?

“Utterly absorbing and deliciously erotic....The Brotherhood is the hottest collection of studs in romance. I can’t wait for the next one!” (New York Times best-selling author Angela Knight)

As a fan of the whole series I pre-ordered this, then counted the weeks, days, hours and minutes until I could finally listen to this much anticipated story and, although I was half-way through another book (which was good by the way), I stopped it knowing that, for me, a new BDB book was going to be epic..... and I was right.

There was the main story of Wrath, his roots, his fears and dreams and Beth's all consuming needs as she lost focus for just a short while but came back fighting, then there were so many sub romances, sub plots and new characters that, at times, you think your head's going to explode. Beth and Wrath's dilemma was so painful, touching and raw, his throne is both a curse and a joy which he eventually found out and he may be blind but he finally gets to see the bigger picture.

A lot of very emotional bitter-sweet torment and turmoil because of the ups and downs in all the romances, danger and threats made by old enemies, twists, turns and surprises and various visits through time to the 17th century to hear of the love and plight of the former Vampire King and a lot more was shared about the Shadow brothers and their lives. There were familiar well loved faces as well as new ones..... but always, through everything, The Brotherhood were there ready to support and rejoice in welcoming in the dawning of a new era.

Worth a credit? Wicked plans were thwarted, blood was spilled, revenge was sweet and love and bonds were deepened so, at the end of Chapter 76, after 22 hours of listening pleasure as the overall plot-line grew, morphed and moved forward, all I can safely say is YES it was well worth the credit, the sleepless nights and the lost hours in my shortened days.

This installment of the BDB, like most, has a LOT going on. The main focus is on Wrath and Beth and a back story of the elder Wrath and his queen. The laws and paperwork required to lead the race, Wrath's role in doing so, his desire to do so and his continuing growth as a male, a mate and as king are all part of the story, and there is not as much action movie material as some of the others, but there are also the continuing sagas of Assail/Sola, Xscore/Layla and Tres/Selena. Wrath and Beth also have struggles with each other and with those who want Wrath out because of his choice in queen.

I've seen some negative reviews, and the complaints seem pretty superficial. If you are one of those people who 1- don't care about any new characters other than the brothers or 2- like to complain about about the few (true and funny) pop culture references and/or 3- have nothing better to do than denigrate the hard work of an author who has provided you and others with a large quantity of great entertainment, pick up Pride and Prejudice, re-read it often, and have a nice life.

Those who love the series will not be disappointed in this one. Absolutely worth a credit or the cash.

I found this book such a big disappointment! I have been listening to this series from the beginning with the first book. I've loved thim all. My only complaint up till now had been the long time between each book. Each time the wait was worth it. Not this time. This book seemed to go off in so many directions with so many characters that I had to get a list of all the characters that have been in this or any of the other books to try to help me with the confusion. The book was advertised to be about Wrath and Beth and their desire to have a baby but it was a good half way thru the book before this topic was really delved into. There was just too much jumping around from couple to couple without really having a clear direction for any of them. Wouldn't recommend it for any lover of this series.

Why is everyone raving about this book? Was it even written by J.R. Ward?? I am a HUGE fan of the Black Dagger Brotherhood and Ward, but this one was so immature I could barely get through it. It seemed like Wrath transformed into a mouthy, cussing, insecure and immature teenager. I'm so sad to say this was a total thumbs down. I've listened and read the whole series a dozen times or more, but I'll never listen to this one again. It did not do credit to the series. The only saving grace was the narrator, who was awesome, and made the book bearable.

I was originally a little confused as to why Wrath gets another book when there are many new characters but when I listened to it, I completely understood. I loved this book and even more, I love when the laws are changed in the BDB world. I find myself cheering on Wrath & Saxton. This book had a little of everything except the war with the lessers and anything really about the brotherhood. I loved the back story for Wrath's parents, it helps explain a lot about who Wrath is. We also got a little from each of the characters from the next few books. This series is has always been a favorite of mine because of JR Wards writing style, each book is written with so many POV & story lines so that it's more about the entire BDB world not just the characters from each book. I don't know how many times I've read & listened to this series (usually I do a complete re-listen every couple years before the new book releases.

Jim Frangione IS the brotherhood to me!!!

Ok now for the review :)

My first thoughts when I started this book, what the heck is going on with Wrath.
So much going on in this book we see Wrath’s father and mother and how there story plays out we see Assail and Sola, iAm, Trez, The Choosen. Xcor and Layla.. I am telling you brace in a good way.

Wrath aversion to having children is really putting a damper on Beth she wants a baby. I understand the risks he doesn’t want to lose her but the race is dying and as King shouldn’t he at least think about her feelings? He just says no end of it. Grrr…

Beth kind of takes things in to her own hands so to speak. Starts sitting with Layla to jump start her needing. She wants that young. I love that she stood up for what she wanted even against The King lol. She is feisty and I love that. It’s what I liked about book 1 too.

JM having more and more seizures, then when he mouths to Beth
"I will protect you always"
And Wrath’s reaction was so very Wrath. I <3’d that part esp with the tension between them you still see the male side even though he knows he has nothing to worry about with JM.

There is a shocking scene between Payne and Wrath that will blow your mind I can’t even with that whole thing.

I do want to see the Scribe Virgin make a comeback. I kind of felt like the ending was a little rushed but then again look how long this book was so it can’t go on forever even though I want it to ;)

This book just didn't keep my interest and was all over the place. Just when I started getting into it, things switched to a completely different story. It was my least favorite of the series.

Plain and simple I loved this book! It's everything you've come to expect from a JR Ward BDB book. I'm amazed after 12 installments I still find these characters interesting and enjoyable. (unlike other vamp series) Kudos to the brilliant author and fantastic narrator. Keep 'em coming!!

A better story. If I hadn't been listening to this on a long commute over several weeks, I would have stopped and been done with it. The series has gone on too long, or has wasted too much time on uninteresting splintered storylines.

Would you ever listen to anything by J.R. Ward again?

The narrator is great. I've always enjoyed Jim Frangione, but the story sucked.

What character would you cut from The King?

Too many too count.

Please go back and reread your first few books. Those were the characters we all enjoyed.

Everything! This is not the JRW book I'm used to. It was dull compared to the rest of the BDB. I didn't like where she took Wrath and Beth. None of it was what I've come to expect from her.

Would you recommend The King to your friends? Why or why not?

Yes, only to keep up on the story tho...if you've already invested in the rest of the series, you may as well finish it.

Which character – as performed by Jim Frangione – was your favorite?

IDK, I liked his narrating period.

Was The King worth the listening time?

Eh, not really, but I'm still glad I finished the series.