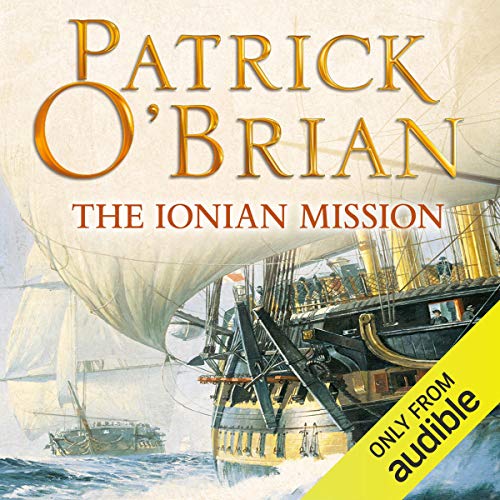 Jack Aubrey and Stephen Maturin, veterans of many battles, return in this novel to the seas where they first sailed as shipmates. But Jack is now a senior captain, commanding a line-of-battle ship sent out to reinforce the squadron blockading Toulon, and this is a longer, harder, colder war than the dashing frigate action of his early days.... A sudden turn of events takes him and Stephen off on a hazardous mission to the Greek islands. All his old skills of seamanship - and luck when fighting against odds - come triumphantly into their own as the story concludes with some fierce and thrilling action.

It is the wind alone that moves us

The Ionian Mission (1981), the 8th novel in Patrick O'Brien's excellent Age of Sail Age of Napoleon series about Captain Jack Aubrey and Dr. Stephen Maturin, starts a new mini-series after the resolution of the 7th book. Stephen is happily married with Diana Villiers (though due to their different personalities and interests they don't share the same house), while Jack is happily married to Sophie (though due to his legal entanglements with a land shark, he has had to escape to sea via a temporary commission). The year is 1814, the British are still at war with America and France, and Jack is to join the British blockade of French shipping in the Mediterranean. And Stephen will accompany Jack in his cover capacity as ship's surgeon and in his secret role as spy.

Once Jack begins his blockade duty on the Worcester, an old, moldy, poorly built, unwieldy ship ('a floating coffin'), the monotonous routine begins sapping his morale and that of the crew: 'There is no duller life on Earth than a blockade.' However, the Mediterranean political situation is complex and fluid (the Barbary States, the Ottomans, and the European powers are all busily at work with and/or against each other, while Greek pirates and Muslim corsairs appear and disappear opportunistically), and this is an O'Brian novel, so when we read, 'Although this was only a parenthesis in his career, a routine turn on the ever-lasting Toulon blockade, with little likelihood of action, there was always the sea to cope with. . . and the unexpected was always at hand,' we may expect some unexpected action (though O'Brian, especially in this book, is a master of deferring action). Through this, the 8th book in the series I've read, O'Brian never repeats himself. He has access to a limitless imagination, a bottomless storehouse of historical information, and an endless variety of political, nautical, martial, meteorological, psychological, philosophical, and zoological matter. From the preparatory beginning to the ferocious climax, I had no idea what was going to happen next.

One of the great pleasures of O'Brian's series (and this novel) is the friendship between and personalities of Stephen and Jack. They are perfect foils for each other, Jack being a hulking, red-faced, good-natured, straight-forward man, at confident at sea and at sea ashore, Stephen being a short, sleight, dark, philosophical (if not misanthropical), secretive man, clumsy at sea and adroit ashore. Both men are brave. Both men love music, conversing without words while playing their violin (Jack) and cello (Stephen), and it is for Jack the only way he has of approaching the mystical or the absolute.

O'Brian efficiently works into his story many vivid early 19th-century British navy details: the effects of grog, the superstitious treatment of luck, the need 'to pass for a gentleman' to get promoted, the system of pressing, the need for and nature of entertainment, the routine for washing clothes, the typical Sunday, the code of punishment, the names of puddings (e.g., spotted dog and drowned baby), the importance of wind direction, the preparations for battle, and much more.

Throughout the novel, he writes vivid descriptions, whether of people ('smiling so broadly that his blue eyes were not more than twinkling slits in his red face'), sea and sky ('a sparkling day, warm in spite of the wind, a truly Mediterranean day at last, with splendid visibility, white clouds racing across a perfect sky, their shadows showing purple on a sea royal-blue where it was not white'), ships ('he plunged down into the familiar reek of the lower deck: bilge-water, cable-slime, mould, hard-worked unwashed men'), music ('then Stephen struck out a phrase from a Haydn symphony, a strange haunting inconclusive phrase, a faintly questioning voice from another world'), fauna ('The sleepy gabble of flamingos'), and more and more.

He also works into his book(s) many apt lines about life, like 'Jack was sipping his hot lemon-shrub and reflecting upon moral superiority, its enormous strength in all human relationships but even more so between husband and wife,' or 'Because, sir, teaching young gentlemen has a dismal effect upon the soul. It exemplifies the badness of established, artificial authority.'

Ric Jerrom is the ideal reader for the audiobooks. He reads everything with perfect sensitivity to style and mood and character. His Stephen (slight Irish) and Jack (bluff British) are always spot on, and he enjoys doing colorful voices like Jack with a cold, Jack's coarse, nagging, and nasal steward Killick, the puny earnest adolescent midshipman Mr. Calamy, a Greek Orthodox patriarch, and Turkish beys and pashas, and he sings sea shanties and booms like a bittern with panache. I can't imagine a better reader for the series.

This book is a pleasure! Fans of literate historical fiction set in the age of Napoleon and of Sail, especially the kind that features great characters, and rare but extraordinarily exciting action.

sailing and spycraft in balance

almost halfway through the series and the sailing and spycraft is still holding a fine balance. i dont know how he can possibly keep this up for 10+ more books.

Narrator was excellent, love the tone on the different characters. Story has accurate historical points of interest.