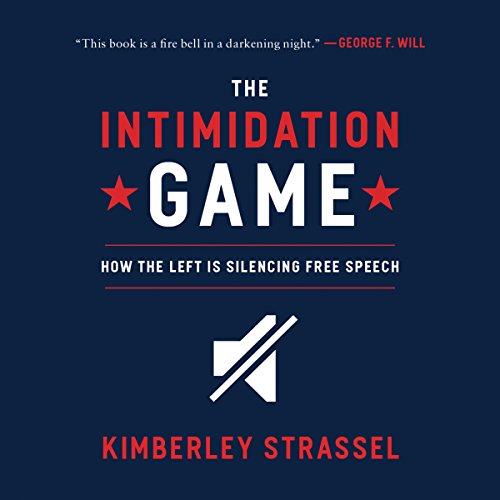 From Kim Strassel - one of the preeminent political columnists writing today and a member of the Wall Street Journal editorial board - comes an insightful, alarming look at how the Left, once the champion of civil liberties, is today orchestrating a coordinated campaign to bully Americans out of free speech.

For nearly 40 years, Washington and much of the American public have held up disclosure and campaign finance laws as ideals and the path to cleaner and freer elections. This book will show, through firsthand accounts, how both have been hijacked by the Left as weapons against free speech and free association, becoming the most powerful tools of those intent on silencing their political opposition. The Intimidation Game provides a chilling exposé of political scare tactics and overreach, including:

Timed to arrive at the height of the 2016 presidential season, The Intimidation Game will shine a much-needed light on how liberal governance and the Democratic machine bullies the political process.

"Public shaming encouraged by leading political figures. Pre-dawn police raids. Federal agencies targeting groups and individuals because of their political views. It's hard to believe these things are happening - and taking place with increasing frequency - in the United States. But they are. And in this searing indictment of the systematic attempt of the political left to shut down political debates they cannot win - Kimberly Strassel provides the often-horrifying details. The Intimidation Game is a shocking and assiduously well-reported chronicle of the illiberal tactics of the new progressives - and a must-read for anyone who wants to understand American politics today." (Stephen Hayes)
"An eye-opening lesson in the law of unintended consequences: where 'a vast new disclosure regime' intended to curb corruption has spawned a corruption all its own." ( Kirkus Reviews)
"Progressives' objective is to extend government's regulatory reach ever-deeper into society's dynamics. Strassel reveals how fast and how far this project has been expanded to include an especially sinister objective: Empowering government to control political campaign speech - speech about the government's composition and behavior. Her frightening reports come from many fronts in this war on America's open society. This book is a fire bell in a darkening night." (George F. Will)

A Most Important Book

Recently, I heard Stephen Hayes remark that if you had one book to read on public policy, The Intimidation Game was it. He was absolutely correct. Regardless of one's political preferences, Left or Right, Kimberly Strassel's contribution to opening our minds to the threat to our precious democracy is profound. A most important read.

So important to have this issue documented this way. It was clear and thorough.

This book is important

I passionately believe every American who still believes in the right to free speech, the right to assembly and practice our faiths without government intrusion or intimidation should read this book. It is for liberal minded people on all sides of the political debate. Our government has become bullies and unless we recognize our rights are being attacked by corrupt politicians and activists who are working together to silence Americans we will lose them.

Very well laid out argument for why citizens need to demand government accountability. No matter which side of the isle you sit. Because what one side uses to suppress me today will one day be used against you.

The war on free speech is real and this work does an excellent job of laying out the issues with documented evidence.

Where do I go to get my free speech back?

I had no idea how bad things really were. It is extremely frightening to realize how aggressive and ruthless the left is about their political bloodsport. Many on the establishment right are aiding and abetting the left. It seems as though it's almost an insurmountable uphill battle. The book did a fantastic job of exposing the complex issues of free speech. I'm waiting for the second book to come out, the handbook of free speech, the how-to manual.
Can't wait for that.
Sincerely,
Anonymous (because I can't afford the audit)

This book gave an informative peek into a side of the "money in politics" debate that I hadn't heard before. Apart from a few minor cringe points where I felt the author tried a bit too hard in humanizing her anectodes (e.g. the "spunky, no-nonsense strawberry blonde small town tea party leader"), I found the presentation very reasonable and fact-based.

This book exposes the grand Kabuki Dance that are the emanations and pronouncements from the DC power brokers daily. The author does a fine job of laying the philosophical and legal foundations for our free speech rights and demonstrates the lack of respect for and threat to incumbacy those rights pose to elected officials and their minions in the administrative state.

I have personally sent this to a dozen friends w instructions as to how to download Audible.

I present my view as an outsider (Scandinavian) observer, but a voracious reader of American history and American planetscape; do not think me an objective reader either. I had and have strong (albeit remote) opinions about the issues; I had wireframe knowledge about the narrated events too, before consuming this book; and while the local presstitutes here are completely clueless, 'bless you, Internet.
I wont vaporload you with my conclusions about the book or the events; instead I give you this. I think that the vividly narrated Mosaic of stories here will not bore you; in the end I felt hammered by it. That is, hit in the noggin By a bloody sledgehammer.

The book is tectonic.

PS.
On closing this book, In this readers mind, echoed these familiar verses: "We hear drums, drums in the deep."

Must read for anyone who values our First Amendment freedoms! Strassel has persuaded me to stand up and use the one invaluable right that sets our
Government apart from all others.