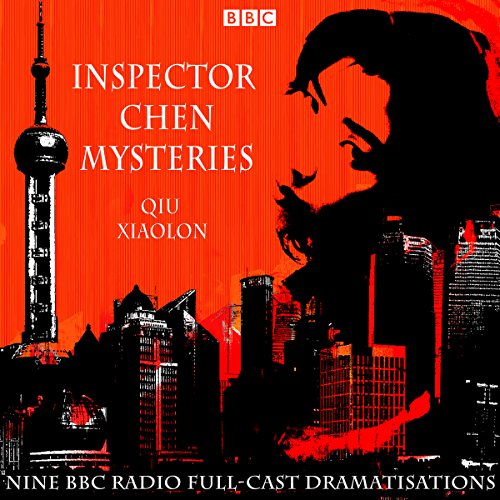 Through thrilling crime drama, these nine mysteries paint a portrait of modern life in communist China, depicting traditional Shanghai life amidst the old alleyways and how it is rapidly changing with modernisation.

Death of a Red Heroine: Shanghai, May 1990. The body of a national model worker is found in Baili Canal. Academic turned detective Chen Cao now heads up the Special Case Squad, an assignment that brings political scrutiny with every move.

A Loyal Character Dancer: When a former dancer and party loyalist at the heart of a people smuggling operation to the USA goes missing, Inspector Chen is under political pressure to find her, tactfully host a young female US Marshall, and find the connection with a grisly Triad murder.

When Red Is Black: When Chen agrees to do a translation job for a property developer, he is given a laptop, a 'little secretary' to provide for his every need, and medical care for his mother. There are, it seems, no strings attached...and then the murder of a dissident writer is reported.

A Case of Two Cities: When the head of the Shanghai anti-corruption squad is found dead in compromising circumstances, Inspector Chen is drafted in as 'Special Envoy to the Emperor with an Imperial Sword'.

Red Mandarin Dress: A serial killer is loose on the streets of Shanghai, but Chen is otherwise engaged on a high-level corruption case. With bodies appearing at the rate of one a week, the homicide team is in desperate need of help.

The Mao Case: It's a dangerous and politically sensitive case for Inspector Chen when he is asked to investigate the sudden change of fortune of the granddaughter of Chairman Mao's mistress.

Don’t Cry, Tai Lake: Chen's lakeside holiday is interrupted by the violent death of the boss of the Wuxi Number One Chemical Company. Will his blossoming relationship with a young environmental engineer compromise his covert investigation?

Enigma of China: Inspector Chen is called in to oversee the investigation into the death of the Director of The Shanghai Development Committee while under house arrest. He has to negotiate the power of the Party, an internet campaign and a new potential romance.

Shanghai Redempton: Inspector Chen finds himself 'promoted' sideways from the Shanghai Police Bureau, before narrowly escaping a nightclub trap and exposing a web of financial and sexual corruption.

"A welcome alternative to Scandi-noir." (Observer)

BBC full cast radio production of the Inspector Chen Mysteries, 9 mysteries to be exact, lived up to BBC radio standards & were a delightfully entertaining listen. Qiu Xiaolong's Inspector Chen Mystery book series was well interpreted for live radio & offers a unique rare glimpse of China's culture and local policing while following the standard English mystery book format. The Inspector Chen character reminds me of PD James Adam Dagliesh, only Inspector Chen's passion for poetry is constrained by Party Politics. I highly recommend this audiobook for mystery lovers for BBC radio production fans and anyone looking for something unique.

The poetry, as I understand, is published in a paper book. It is quite remarkable and adds to the ambiance. Small peeks into the communist party are informative, if not sad. I also enjoyed the mysteries. Highly recommend this as the narrator is marvelous.

My first time listening to this author and narrator. After this book I went ahead and purchased three more of the Inspector Chen series. The only thing I was not overly thrilled was changing the narrator.

This book contains four dramatizations of Chinese tales. Each story provides a feel and insight into the way things were in China in the nineteen nineties. The main character is interesting and the stories all feature murder and mystery interwoven with Chinese culture of the day. I rated this as light entertainment and placed it in the second tier of my library.

The stories are interesting and the performances are fantastic. Wish there were more! Another great BBC audiobook

A detective's window into China

Read all these books. This rendition is very good. would have rather had Chinese actors reading. a good window into China

The story was good but I would have enjoyed it more if I had read it, The main character was ok but the british accents for the other charaters were distracting.

A honest and diligent detective in modern day China solves murder while under the watchful eyes of the party. Detective Chen reminds me of the English Inspector Morse, but instead of classical music, Chen writes poetry. These nine stories are quick and satisfying for any murder mystery fan.

Can't get past the British accents

I read the reviews and several people mentioned how disconcerting having Chinese characters speaking with British accents were. I didn't think it would put me off but it did. It was very distracting and annoying. The stories themselves were excellent.