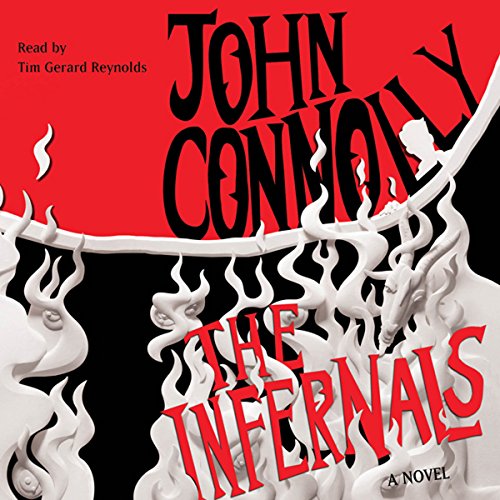 From New York Times best-selling author John Connolly, a wonderfully strange and brilliant novel about a boy, his dog, and their struggle to escape the wrath of demons.

Young Samuel Johnson is in trouble. Not only is his eyesight so poor that he mistakenly asks out a letter box on a date, but an angry demon is seeking revenge for Samuel’s part in foiling the invasion of Earth by the forces of evil. It wants to get its claws on Samuel, and when Samuel and his faithful dachshund, Boswell, are pulled through a portal into the dark realm, the home of the Infernals, it gets its chance.

But catching Samuel is not going to be easy, for the Infernals have not reckoned on the bravery and cleverness of a boy and his dog, or the loyalty of Samuel’s friend, the hapless demon Nurd, or the presence of two clueless policemen and the unlucky, if cheerfully optimistic, driver of an ice-cream van.

Most of all, no one has planned on the intervention of an unexpected band of little men, for Samuel and Boswell are not the only inhabitants of Earth who have found themselves in the underworld. If you thought demons were frightening, just wait until you meet Mr. Merryweather’s Elves.

Wonderful for Children and Adults

This sequel to Connolly’s The Gates is another wonderful, clever and laugh out loud hilarious adventure. The style of the book with its humorous asides and clever footnotes is perfect for translation to audiobook, and Tim Gerard Reynold’s narration only makes it better.

A Goofy, Inventive Romp Through Hell

This sequel to The Gates is a blast. Connolly's sense of humor is fine form, right down to the hilarious footnotes, and the story is well-paced and immensely entertaining. The first book was perfectly narrated by Jonathan Cake, a tough act to follow, but Tim Gerard Reynolds does an excellent job. Highly recommended.

Should have kept original narrator

They didn't even try to have the new narrator do the same voices as the previous one. This narrator was also a bit boring to listen to and didn't have as good of comedic timing.

If you could sum up The Infernals in three words, what would they be?

The cast of characters is great. These books are like a mix of Neil Gaiman and Douglas Adams. The characters are so funny. I love all the symbolism and references.

Have you listened to any of Tim Gerard Reynolds’s other performances before? How does this one compare?

Him narrating the second book was sort of jarring. The first narrator wad wonderful.But tim is one of my favorite narrators so I settled in to his characters. He is great!

I laughed all the way through

Not bad, but frankly disappointing after the excellent 'the gates'. The narrator did a fine job.

Sadly, this new narrator took the charm out of the character of Nurd, who had been my favorite part of the last book.

I love intelligent humor and genre breaking stories. Loved the characters, loved the plot, just liked the narrator. I preferred the narrator from The Gates but by the third book this one has grown on me too.

A fun listen full of funny jokes delivered with the usual skill of narrator TGR.

I wish I could give this more stars this is one of the best sequels I have read.

This is a great follow-up to The Gates. All my favorite characters are back, some 'not-so-favorites', and many new ones. Though some don't play as large a role in this book, Samuel and Boswell are once again in the thick of things.

Speaking of which, it is really helpful if you've read The Gates prior to this, but not absolutely necessary. They do explain what happened in the first book. But you will have missed the fun of listening to it. ;)

The narrator does a tremendous job! He has a great voice and provides each character with a voice that rings true based on their nature.

While I am an adult (at least my driver's license says I am) this book is probably targeted to a slightly younger audience. But if you enjoy lighthearted 'evil' with a lot of laughs, this is a book for you!