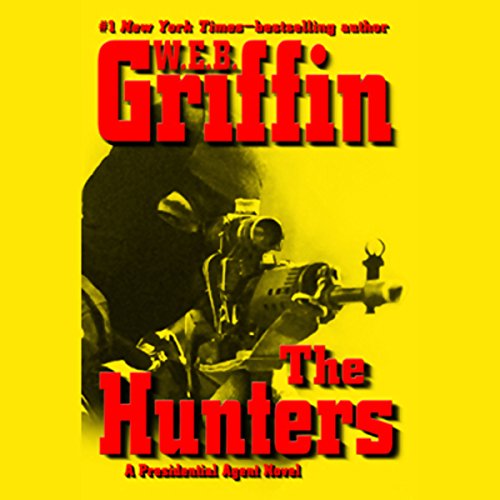 The first two novels in W. E. B. Griffin's exciting Presidential Agent series, By Order of the President and The Hostage, immediately raced up the best seller lists. Told in "punchy prose that connects like a right hook" ( Chicago Tribune), they were further proof that "Griffin just keeps on getting better" ( Booklist).

The Hunters picks up right where The Hostage left off. Two brutal murders and millions of missing dollars in the growing UN/Iraq oil-for-food scandal have led Castillo and his team to an estancia in Uruguay, where the man they seek is murdered right before their eyes. Who is responsible? Most likely, the people higher up in the dirty-money chain, those willing to risk anything to keep their secrets from being revealed. They've left just enough of a trail, though, for Castillo to pick up the scent, and, with carte blanche from the president of the United States to follow it wherever it takes him, he ends up...well, not exactly where he expected.

Brimming with rich characters, strong action, and cutting-edge drama, this is Griffin writing at the height of his powers.

OK I like W.E.B. Griffen's work. This is a great story. The characters are well developed. It's a continuation of previous stories. The star of this is the narrator. The characters are from eastern europe, Russia, Argentina and Uraguay. Each character has a distinct accent absolutely brought to life by the narrator. I am really quite amazed at his skill. If you value the "performance" as much as the story you'll love this one.

I’ve bought several of W.E.B. Griffin audio books and have loved them all. The other books I bought were narrated by Dick Hill. I thought I’d try someone new so I bought this books narrated by Jay Sanders. What a mistake! Every one of his characters sound like they’re either high or have a learning disability. He seems to think that talking VERY slowly makes the characters sound really deep. It doesn’t. It makes them sound retarded. I’m going to beg amazon for a refund and buy the exact same book narrated by Dick Hill. This one is just too painful to listen to.

Dick Hill, the narrator of the first two books did a better job bringing the characters to life. Jay O. Sanders has a monotone voice, putting me to sleep.

I found the third book much harder to follow than the first two, perhaps because of the narrator or the fact that is it hard to follow the additional characters that are being introduced.

The 2nd book made me look forward to listening to the 3rd, but I am not sure if I'll be able to finish it or if I'll buy the last one.

Loved the First and enjoyed the second but the third was a sore disapointment. Please no more or take more time to write a good one> You have in the past

What was that about?!

The reader was one the best I've listened to. Excellent accents for each character. The story however was too complicated for me to follow. I got to the end and still didn't know the point. It will keep me away from CIA plots for a while!

Thumbs up on Jay O Sanders

I too am a W.E.B. Griffen fan having listened to his WWII series prior to this as well as the first in the Presidential series. Sanders, along with Frank Muller are the two best readers out there. I am amazed at his ability to draw pictures in your mind of the characters by his ability to alter accents and voices at will.

The plot takes you on a multicontinent tour with a number of characters developed in previous books, the adventures of Charlie Castio brings out the Walter Mitty in all of us.

I love the Presidential Agent series. It takes you all over the world.

Hope it will continue and not end with this book.

Very very slow and lacking in action. Too many characters. I'll stick to Vince Flynn and Brad Thor.

"The Hunters" picks up right were "The Hostage" left off. It is a smooth transition with an excellerating plot. It becomes a little tedious at times. It is still an excellent sequel with an exciting, satisfing plot left open for another book in the series.