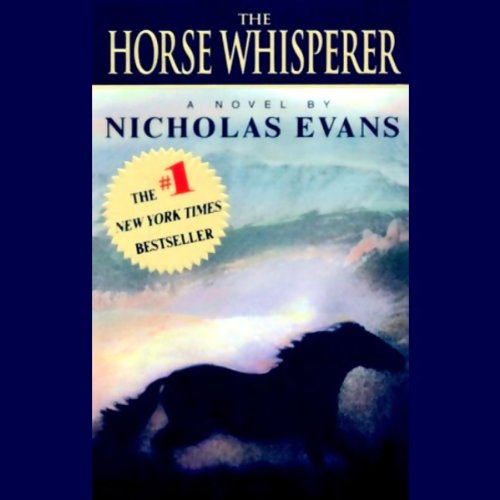 A 40-ton truck hurtles out of control on a snowy country road, a teenage girl on horseback in its path.

In a few terrible seconds the life of a family is shattered. And a mother's quest begins - to save her maimed daughter and a horse driven mad by pain. It is an odyssey that will bring her to...The Horse Whisperer

He is the stuff of legend. His voice can calm wild horses and his touch can heal broken spirits. For secrets uttered softly into pricked and troubled ears, such men were once called Whisperers. Now Tom Booker, the inheritor of this ancient gift, is to meet his greatest challenge.

Annie Graves has traveled across a continent with her daughter, Grace, and their wounded horse, Pilgrim, to the Booker ranch in Montana. Annie has risked everything - her career, her marriage, her comfortable life - in her desperate belief that the Whisperer can help them. The accident has turned Pilgrim savage. He is now so demented and dangerous that everyone says he should be destroyed. But Annie won't give up on him, for she feels his fate is inextricably entwined with that of her daughter, who has retreated into a heartrending, hostile silence. Annie knows that if the horse dies, something in Grace will die too.

In the weeks to come, under the massive sky of the Rocky Mountain Front, all their lives - including Tom Booker's - will be transformed forever in a way none could have foretold. At once an epic love story and a gripping adventure, The Horse Whisperer weaves an extraordinary tale of healing and redemption - a magnificent emotional journey that explores our ancient bonds with earth and sky and hearts untamed. It is a stirring elegy to the power of belief and self-discovery, to hopes lost and found again.

So Sweet, so innocent, so destroyed by the movie

The book was actually riveting. The writing was smooth, tense and consistently high quality. the characters were real and full. I was so anxious to see the movie, but what a flop. So, if you loved the movie.... you'll go crazy with the real, undiluted, story of love and family and, by the way, horses. If you saw the movie, try hard to forget it and replace that memory with what you hear!

I put off purchasing this book because of the movie - I shouldn't have, it was excellent. The narrator was a perfect choice for this book - (I also enjoyed his reading of The Green Mile). The book covered the gambit of emotions and was well written, the descriptions made you feel like you were there, and, if you love horses and/or love stories, you will really appreciate this book.

Another Classic from Muller

The story was excellent, the performance nonpareil. This is one of the few books that compares favorably in term of story and performance to "The Prince of Tides" (also performed by Frank Muller)
.

A Love story, plus healing hearts

What did you love best about The Horse Whisperer?

It's hard to say what I loved best. I guess it just swept me up. A mothers drive to heal the wounds of the family ( including her own). The ''horse whisperer'' tom is based on an actually man ( still alive ) today who does horse therapy so to speak. He does therapy for the horses as well as the riders. I suppose the notion and romantic situation caught me up. The story was touching, heart breaking and sweet. I guess it was simple well written cowboy love story with a twist.

Terrific story narrated by Frank Muller. Mr. Muller is sadly deceased. Romantic without being silly. Great depiction of horses and the West!

...good book and a GREAT reader. Frank could read an owner's manual and draw you in. This is just
'so' much better than the movie. Presented like this it ranks up there with Beach Music and Pillars of the Earth.

A great story read by the best, Frank Muller

This is a great tale of tragedy and redemption worthy of a film production.
The ending was unexpected and not in keeping with the forward motion of the story.
I loved in however and recommend it. Frank Muller is the only Voice Actor Narrator who amazes with charter interpretations.
I search for books based on Muller's voice acting.

This story is amazing. You feel every branch and leaf, smell every wind and blade of grass. Muller was the most brilliant reader. I miss the sound of his voice at the conclusion of every book!

My favorite book and probably the 5th or 6th time I have listened to it over many years. It is well written and Frank Muller is a master in making the story come alive. A wonderful escape from our crazy world today!

Frank Muller is one of my favorite audio box narrators. He just always does and amazing job.