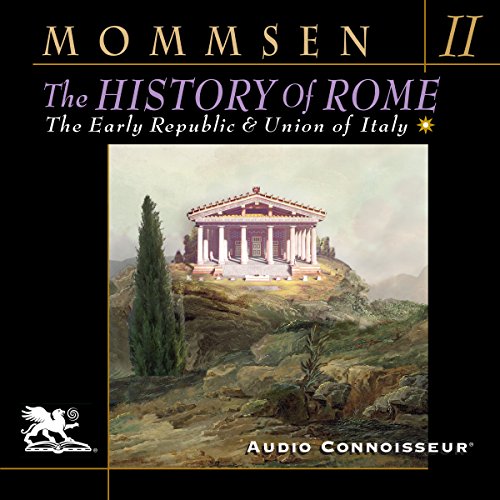 The History of Rome, Book 2

Book two of Theodore Mommsen's history begins in 509 BC, when the last Roman king was expelled and a republican form of government was formed. Starting here, we trace Rome's political and cultural development under an aristocracy whose puritan fanaticism is legendary. But security from surrounding hostile tribes was of uppermost concern, and the city was constantly at war with one tribe or another.

During the fifth century BC, the Republic's energies were directed toward uniting or subduing her nearby Latin-speaking neighbors. By the beginning of the fourth century BC, Rome was in control of a Latin league. Following the devastating sack of Rome in 390 BC by a Celtic tribe that descended from the Po Valley, the Republic quickly recovered and resumed its confrontation with neighboring tribes. By mid-fourth century the Etruscans to the north, the Sabines to the east, and the Volscians and other Campanian tribes in the south have been reduced. Only the mighty Samnites in the Apenines remained. After a war of almost 35 years, they surrendered.

But in 280 BC the Italian Greek city-states become alarmed and invited the leading Greek general of the day, King Pyrrhus of Epirus, to be their champion. Thus began a grinding five-year war between Greek phalanxes and Roman legions. By 272 BC the last Greek city in Italy had capitulated, and Italy was united under Roman hegemony.

Although Mommsen used the AUC system of Roman years, which begins as the Roman year 1 (754 BC), we have transposed these dates to those of the Christian era. All dates are BC except where otherwise indicated.

We do not recommend Mommsen for those without a firm grasp of Roman Republican history. The work of Cyril Robinson would be a great place to start for the neophyte historian.

"He combined the power of patient and minute investigation with a singular faculty for bold generalization and the capacity for tracing out the effects of thoughts and ideas on political and social life." (Encyclopedia Brittanica, 11th Edition)

Mommsen is not easy...but you can't really do without if you're serious about roman history...And Charlton Griffin is always very good...

To those complaining about the narration

Slowing the speed to 0.85x helped a lot. Excellent book, and great narration to boot