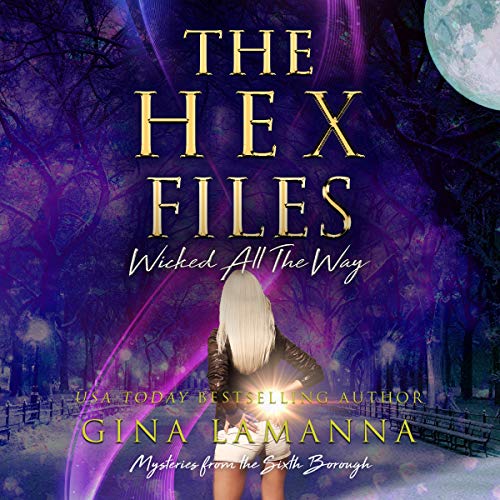 The Hex Files: Wicked All the Way

When Wicked hunkers down for the holidays, a snowstorm isn’t the only thing threatening the paranormal sixth borough of New York. A student has been killed on the Campus of Magic, and Detective DeMarco is called to the case. But once she begins to unravel the clues surrounding the murder, she realizes the incident is far more complex - and dangerous - than she ever imagined.

Aside from murder, Dani is also confronted with the return of her oldest brother to town for some mysterious reason he doesn’t feel like sharing. Meanwhile, Grey has been gone for weeks, and Matthew is caught up in his new role for the NYPD. When Dani is assigned a rookie partner to help her with her latest case, it’s the last straw...until the killer sets his sights on Dani DeMarco. Suddenly, she finds herself fighting for her life.

The mystery of the Hex files continues. The love triangle between Grey, Matthew and Dani remains. Though the guys have come to an understanding, it is a tenuous agreement at best.

Matthew is posted in New York helping the community on a larger scale. His and Dani’s relationship is feeling the strain. Dani is being slightly immature about the separation and the lack of information Matthew shares. Matthew has understood her need to work; how she goes into danger and her role in the Hex Files. Yet she has a double standard with Matthew being in a similar work situation.

A college student is killed, and Dani is partnered with a rookie, Primrose. Primrose is a smart resourceful person who becomes indispensable in the investigation. At least that curtailed Dani’s whining about Matthew’s absence.

Holiday time, family time and brother Rob come home for a visit. When his visit tangentially becomes involved in her case, she forgets what family means. I love how inventive the holiday decorations can be for a magical family.

All the characters we have come to enjoy are peripherally in the story. Ninety percent of the actions centers around Dani and Primrose solving the murder. What I could have used more of was her furniture’s opinions.

I love this series. It has lots of twists and turns as well as like-able characters. The narrator is fantastic.

A fun and enjoyable series!

Another great installment for this unique series. I read a ton of paranormal / sci-fi books and I think this is a different take on this particular genre. It's a paranormal world built into our human world through a different dimension which I think is interesting. I also enjoy that it's not another sappy, annoying romance story we've all read a thousand times. Throughout the series, it's turned into more of a mystery detective story. The first book seemed like it was going to be another annoying romance that we all know how it's going to turn out, but to my surprise (and I'm glad I stuck with it) it turned into mystery sub plots woven into a larger plot which I really enjoyed. If you're fans of Kim Harrison's The Hollows series, I believe you will also enjoy this series. Additionally, I think the author does a great job of character development and I've really begun to love some of the characters in this world.
Now, to the narrator, I absolutely love Allyson Ryan. I think she does an exceptional job narrating and distinguishing between characters. Her voices are on point, and she is engaging throughout.
Looking forward to the next book in this series!

I really enjoyed listening to all five books in the series so far and can't wait for book 6 to eventually come out hopefully there will be a book 7 8 and 9 also! :-)

Gina LaManna has written another excellent installment the Hex Files series. With an original storyline and characters we’ve grown to love my only complaint is I have to wait for the next in this wonderful series. I highly recommend this book and series. I do however suggest you start with the first in the series.

Good story though I don't like love triangles. Dani's and Matthew's love is growing though separations are not good. The continuation is interesting enough to keep my attention. Well performed by Allyson Ryan.