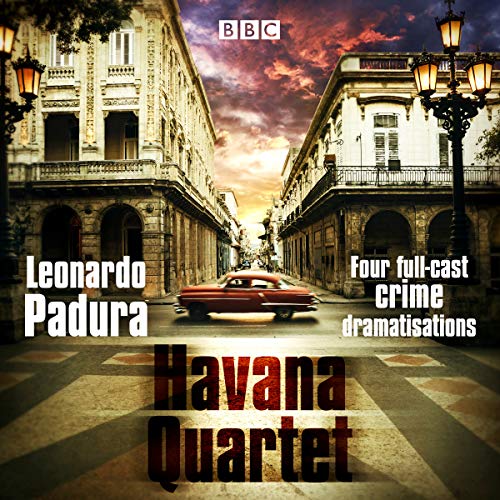 Havana Blue: it's New Year's Day 1989, and Lieutenant Mario Conde wakes up with another terrible hangover and a case which is close to home. His schoolboy rival, now a party grandee, is missing.

Havana Gold: Lieutenant Conde goes on a trip through his childhood Havana haunts when a young female schoolteacher at his old school is murdered. And could it be that he has finally met the woman of his dreams?

Havana Black: Conde has been suspended for taking a well-deserved pop at a fellow officer. But then he is called in for a case involving the disappearance of a Cuban with US citizenship who has come home to visit his family.

Leonardo Padura is a novelist and journalist who was born in 1955 in Havana, where he still lives. He is best known internationally for the Havana Quartet series, all featuring Inspector Mario Conde. In 1998 Padura won the Hammett Prize from the International Association of Crime Writers, and in 2012 he was awarded the National Prize for Literature, Cuba's national literary award.

the first of four stories is produced in a way that the primary character is very difficult to hear and understand. we were listening while traveling in the car and this was undoubtedly the most difficult of more than 50 Stories We Have Heard. the actor playing the primary character throughout the four stories has a low voice and much of the time is near whisper in communication. on a lighter note this is a gumshoos type of stories although the primary character works for the official Police Department. he is a very typical characters for these types of stories. we had just returned from a trip to Cuba and had actually seen the author in person, which was kind of cool! the dramatization does not give you any extra explanations, particularly of places like the malecon which is a long Street-Way built upon a sea wall. I guess it was not written for non Cubans, but the translation could have given us a little more maybe?

I enjoyed these dramatisations and the Cuban setting but the spicy flavours won't be to everyone's taste. Crimes of passion, sexual gratification and greed featuring a detective prone to self indulgence and his own weaknesses mean these stories are more colourful than cosy.