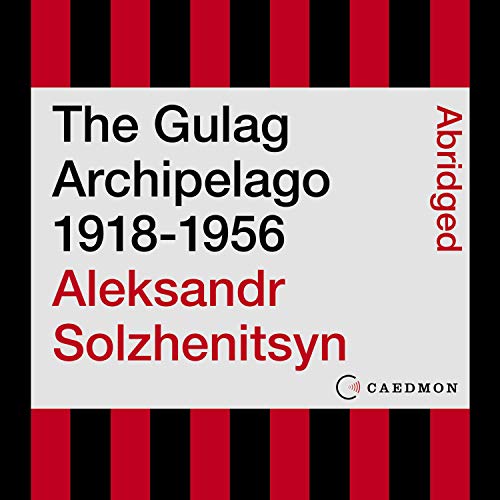 “It is impossible to name a book that had a greater effect on the political and moral consciousness of the late 20th century.” (David Remnick, The New Yorker)

The Nobel Prize winner’s towering masterpiece of world literature, the searing record of four decades of terror and oppression, in one abridged volume (authorized by the author). Features a new foreword by Anne Applebaum.

Drawing on his own experiences before, during, and after his 11 years of incarceration and exile, on evidence provided by more than 200 fellow prisoners, and on Soviet archives, Solzhenitsyn reveals with torrential narrative and dramatic power the entire apparatus of Soviet repression, the state within the state that once ruled all-powerfully with its creation by Lenin in 1918. Through truly Shakespearean portraits of its victims - this man, that woman, that child - we encounter the secret police operations, the labor camps and prisons, the uprooting or extermination of whole populations, the “welcome” that awaited Russian soldiers who had been German prisoners of war. Yet we also witness astounding moral courage, the incorruptibility with which the occasional individual or a few scattered groups, all defenseless, endured brutality and degradation. And Solzhenitsyn’s genius has transmuted this grisly indictment into a literary miracle.

“The greatest and most powerful single indictment of a political regime ever leveled in modern times.” (George F. Kennan)

“Solzhenitsyn’s masterpiece.... The Gulag Archipelago helped create the world we live in today.” (Anne Applebaum, Pulitzer Prize-winning author of Gulag: A History, from the foreword)

when I pre-ordered this title it was going to be narrated by Jordan B. Peterson. I was never informed or given the option to revoke my pre order... this book is published in the public domain so I didn't buy the book for the audio I bought it for the narrator and I am aware that jbp has a lot going on in life but still atleast notify the person(s) of the (massive) change when the book is buyable for 0.00 (cause its free) any money spent is for a reason and mine was spent for the narrator... very very disappointed

Mandatory reading in Russia, not USA. Why?

Why is this excellent, powerful record not REQUIRED READING for US students. It’s a damned shame that the sickness of Marxism has taken such hold here... wake up Americans!

A must read (or listen)

One of the most important books of the 20th Century. It's not what I expected, it was more. Study the details and never forget how a society void of personal liberties can devour itself.

This boo should be mandatory reading for any person who wants to go into the social sciences, especially political science. This book contains a history lesson that needs to be remembered forever.

There's a reason this is considered a classic

Good read. An uncensored look into the depths of deprivation and psychology of the communist experiment experience. Should be required reading

This might be the single most Important book I have ever read or listened to. So much insight into the current political situation in the US. Communism is the true contagion we should be fearing.

The chapter on torture is difficult to stomach, but this book contains lots of wisdom.

One of the best historical treatments of atrocities of communist atrocities. Excellent performance as well.

I wish this was required reading for me in high school. I had embraced so much leftist ideology up until the moment I listened to this book. I sincerely believe that so many more people my age would abandon Marxist thinking if the even got halfway through this book.
I’m now planning on reading the full three-volume version to what more I can get out of it. I can’t emphasize enough just how life-changing Solzhenitsyn’s writing is.

Everyone should read this book.

While the story is somewhat disjointed and the performance is quirky for the first half of the book, the content of this book is really important for people to read. I highly recommend this book.