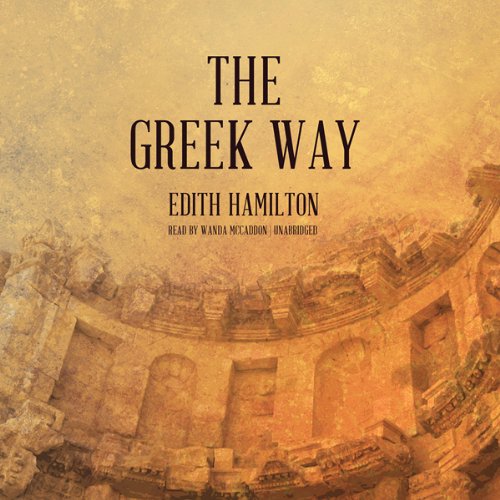 "What the Greeks discovered, how they brought a new world to birth out of the dark confusions of an old world that had crumbled away, is full of meaning for us today who have seen an old world swept away."

Based on a thorough study of Greek life and civilization, of Greek literature, philosophy, and art, The Greek Way interprets their meaning and brings a realization of the refuge and strength the past can be to us in the troubled present. Miss Hamilton's book must take its place with the few interpretative volumes which are permanently rooted and profoundly alive in our literature.

...Not as Good as The Echo of Greece

I will thwart the trend of obsequious unreflective praise of The Greek Way, probably because I have read it's original thesis in The Echo of Greece.

Essentially, TGW includes more tragedy and Comedy than did EOG and much more of the inessential in the bargain.

EOG focuses on that which is essential about ancient Athens: her philosophy and her sense of what a democracy is supposed to be. Nothing else really matters in conparison, no matter how many ruminations Hamilton makes on the supposed Greek core sensibility and the like. Hamilton, it pains me to say as a fellow admirer of ancient Athenian culture, is unduly biased toward all things Greek. Her work was worthwhile, but Echo is the better and miore lasting testament to the Ancient Athenians we are all thinking of. Pound for pound, there is certainly no comparison. Echo hands down more efficiently and elegantly defines the ancient Athenian ethos that Americans and Europeans (and all students of democracy of philosophy) look back to for inspiration and guidance.

Liked it; but I have mixed feelings

I heard of this work in a quite different audible book, Landslide by Jonathan Darman, about Reagan and LBJ in the mid-1960s. In that book it was related that, after JFK was shot, brother Robert found much solace in The Greek Way. (I'm fascinated by the whole Kennedy saga, though by no means a fan of the main characters.) What the heck, thought I, I can always use a bit of solace, and a bracing visit with my western heritage, etc., by an unapologetic author, as a contrast to the cheap shots constantly heard nowadays. And I suppose this fills the bill. It is in its way probably a mirror of the sort of Homeric, heroic tone one might have heard directly from these intensely enthusiastic Greeks. And there is much artistry and beauty in it, if a big helping of that is what is desired. It depends on what a listener wants. Edith Hamilton was no slouch at composing a sentence or bringing some uplifting sentiment or sparkling and inspiring image to these scenes. I guess I am spoiled at present though, preferring a less strident ease of declaring what is what (and leaving out various troubling facts known better to more modern scholarship); I want the whole story and a balanced one, and I like a more patient scholarship that builds its case with implacable logic.
But I do consider it vital that, in my own university days, I had at least a few great professors of this sort. Because that energizes everything else, all the later paths that can open to a person who has exulted in these sorts of things. A LOVE of scholarship, I owe to earlier exposure to people like this.

Where does The Greek Way rank among all the audiobooks you’ve listened to so far?

I like to read Edith Hamilton. However, if your annoyed by the "compare and contrast" method of scholarship (I think its very outdated myself) you wont like this. Mrs Hamilton has a strong need to compare cultures and thus extract the truth shes looking for from the contrasts. The problem is that the generalizations she must inevitably make for this type of approach can be wide sweeping and fairly wild, and thus the conclusions she reaches based on these generalizations become merely subjective. Often you may find yourself disagreeing with her.
One area in particular I disagree with is Hamilton's conclusions regarding Ancient Egypt. Explaining the Egyptians preoccupation with death (as she puts it), she attributes this to the fact that Egypt was mostly a place of misery and toil, thus producing in the culure a certain yearning for the next life and a certain salvation in death. Whereas, on the other hand, you have Hamilton's Greeks, portrayed here as a youthful, playful and life affirming culture, centered on the here and now.
This is wildly inaccurate. The Greeks themselves -Solon, Euclid, Pythagoras, Plato, Herodotus-who traveled there at different times, and acknowledged Egypt as the richer, deeper and more profound culture in every case. The Greeks who made their way to Egypt returned to "revolutionize" their respective fields of science. However, they were merely translating the knowledge of the Egyptians. The Greeks saw themselves more as children when they compared themselves to the Egyptians. All of her sciences had their origins in Egypt, the Greek Gods themselves had their origin in Egypt. Egypt was several thousand years old by the time the Greeks came into their ascendancy. Far from misery and toil, the Egyptian land was abundant, the society was rich and vibrant. Why do you thing Egypt was the breadbasket for the entire Mediterranean even into Roman times? She was the hub of Mediterranean trade. The view of slaves toiling to build the pyramids is so outdated to be comical now days. Egyptian concepts around death were not the attempts of a desperate people to escape the chains of misery, but a highly developed science of the soul which revealed a deep understanding of the nature and immortality of the soul and the possibility for perfection in this life and the next.
Anyway, sorry for the rant, but that's one example that I can provide to show the dangers of this type of compare and contrast history. Still, its a fun listen. Nadia May is great, the book is immersive, and there is still a lot of great info in here.

One reaction, see above

It was a fine book with a good reader. She does talk a little slow for my taste. I just had to put the speed up to 2.5

A great sampler of Hellenic thought

This work stands together with “Greek as a Treat” by Peter French as sampler boxes of Hellenic thought. Both serve as a broad overview of the wellspring of western thought. From here you can deepen and broaden your appreciation of Greek authors beginning with the introduction that sparks your interest and moving outward with more and varied reading. This can start you along a lifetime of enrichment that has been eclipsed and neglected in modern college education. Either or both of these books will be the first among many others in a growing library of entertaining, enlightening and enriching books. Bon voyage!

i found this book, to be more than i expected. i found very fascinating. i was looking for a book on mythology and got the entire of greek history and it's relavance to our modern western beliefs.

This is a must buy for study the Golden Age of Greece. As with all study or simple enjoyment of history, context is important. This book provides a good insight to the ancient Greek mindset and then an understanding how / why they reacted.

being a person profoundly interested in the history which resulted in the oposing directions that eastern foundational world view and the western christian mysticism world view had come about,this book is a treasure..let me explain....Our world today labels anyone who publicly compares one culture[if western] as being higher or more true or correct IN TRUTH over another ,as a bigot and uncompationate...If the comparison is IN FACT correct then this political correctness actualy destroys any acces to TRUTH..it may be kind to someones feelings but the hight of cruelty to all who seek reality...this being said,I simply could not understand why the eastern religions all have at root this terrible world view of non cosmic reality and the evil of personality and so forth,,I know these men and women are not bad or evil people..so Why give in to this wretched view...my attempts in modern writers to find the history of these nations resulted in there cowardly hiding any comment at all on this.....until edith Hamiltons great histoical books...Being she wrote before todays tyranical political correctness and her obvious love of western attitudes,clear and honest insights flow wonderfuly.I have found this and her other books the finest written on early western civilisation as compaired to the poor eastern civilisations.please understand,it is all the countlesss people who have had to live in these fatalistic civilisations that my heart weeps for.thank God they are begining to be freed from the terrible spiritual bondage that pantheism inevitably results in..For all the westerners who Chose to run to the east for spiritual reality I can only say enjoy the fruits of your choices.....Anyway, all who love the joy of creation and personality and life lived to its full with all its colors,you will love this and all this writers books....enjoy