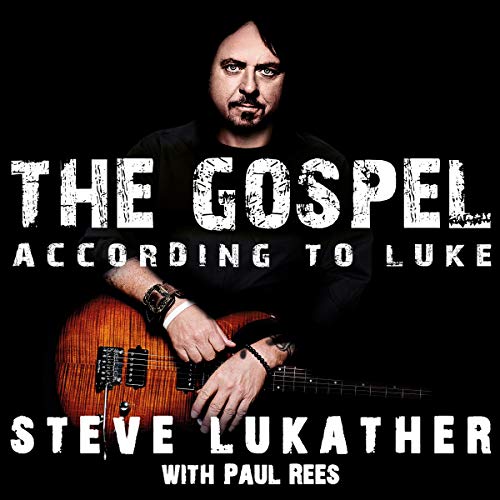 The Gospel According to Luke

The Gospel According to Luke

No one explodes one of the longest-held misconceptions of music history better than Steve Lukather and his band Toto. The dominant pop-culture sound of the late 1970s and '80s was not in fact the smash and sneer of punk but a slick, polished amalgam of rock and R&B that was first staked out on Boz Scaggs' Silk Degrees. That album was shaped in large part by the founding members of Toto, who were emerging as the most in-demand elite session muso-crew in LA, and further developed on the band's self-titled three-million-selling debut smash of 1978. A string of hits followed for the band going into the '80s and beyond. Running parallel to this, as stellar session players, Lukather and bandmates David Paich, Jeff Porcaro and Steve Porcaro were also the creative linchpins on some of the most successful, influential and enduring records of the era.

In The Gospel According to Luke, Lukather tells the Toto story: how a group of high school friends formed the band in 1977 and went on to sell more than 40 million records worldwide. He also lifts the lid on what really went on behind the closed studio doors and shows the unique creative processes of some of the most legendary names in music: from Quincy Jones, Paul McCartney, Stevie Nicks and Elton John to Miles Davis, Joni Mitchell, Don Henley, Roger Waters and Aretha Franklin. And yet, Lukather's extraordinary tale encompasses the dark side of the American dream.

Engaging, incisive and often hilarious, The Gospel According to Luke is no ordinary rock memoir. It is the real thing....

Has some good moments

Half the book he's naming his 1001 amazing incredible friends "this guy was great" "this guy was awesome" " I got to work with this guy and that guy and that guy" "he was just a great guy. I really wanted to like this book but it seems like no thought went into planning it. Just because you're successful and lived an awesome life doesn't mean you will write an equally awesome book without effort. After 4 hours of wanting to enjoy this, I have to be honest with myself and say- I'm bored out of my mind and don't give a damn who this guy got to talk to, work with, drink with, etc. He said he did crazy, insane stuff that he'll talk about in the book and all along I was waiting for some of that good stuff. The craziest thing so far was showing someone his butt. Cmon. Some stories were really nice so it's a shame. I want to hear them all but I don't want to be bored sick just to find few more golden nuggets.

Embracing the Gospel as an Atheist

True, I am an all time absolute Toto fan. But I always kept a distance in fear of reality belittling my idols. I bought the book out of curiosity and left if there for some time, finishing up other stuff. After my latest Toto VIP experience in Lucca I decided it was about time I started the book. Started? I devoured it. Couldn’t just stop listening to it. It is fresh, direct, totally honest and frank, touching, full of love and all other primary emotions; and at the same time it is incredibly informative about not only Tito but the LA and world music scene in general as it evolved over the decades. And it includes the unveiling of sacred secrets (like tuning the guitar to the Stones’ setting). I really hope Luke will write another one. One warning: if you, like me, are (i) Italian and (ii) a lawyer, be prepared to take some ++++.

I loved this book!!

If you love Steve Lukather and Toto this book IS the book for you. I loved it from the beginning till the very end!!

Luke is a great story-teller and gosh do he have storys. if you are a musician there is nothing to think over, BUY. If you are not, still do because it's great!

Great book,interesting stores about a great musician. A book I would recommend for music lovers

Steve Lukather writes an honest and straightforward book of his life in the L.A. studio musician scene if the late 70’s and 1980’s - the last of an era still surviving in today’s computerised music scene. Musicianship has been put on the back burner and is totally under appreciated these days but Luke’s story is nevertheless captivating and riveting! The language is rusty but that is refreshing in today’s PC environment. It can also be touching; reminiscing over friends and family lost over the years especially the Porcaro Brothers, Jeff and Mike! The music from this era is varied and eclectic but Luke’s involvement with several Monster hits from the time is very interesting reading/listening! Highly recommended for any musician or budding musician and for lovers if the thousands of recordings, literally, that Luke has played on - go look up his discography - so enjoy his very entertaining and very funny book and Audible!!!!

I was really looking forward to this autobiography by one of my favourite musicians. I knew I was in for lots of interesting stories about famous people but it was even better than I expected. Steve Lukather is the narrator and he doesn't simply read it, it's like he's there and telling you stories. There wasn't one boring minute and I sure hope there's going to be a second book.

I enjoyed the story told by Luke himself!

...even that it was hard to follow his sometimes unclear spoken words. I am not a native speaker, but I was able to have a lot of fun with the pure information mixed with his undertone.