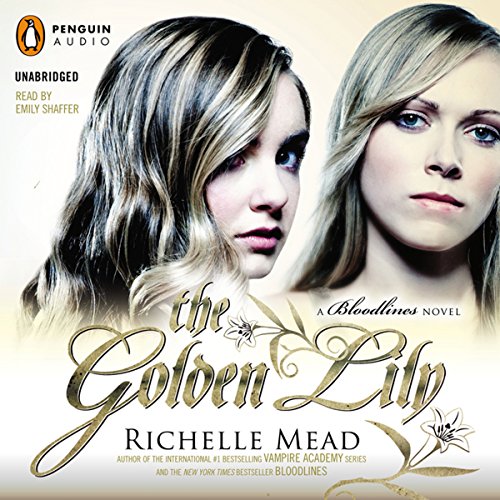 Tough, brainy alchemist Sydney Sage and doe-eyed Moroi princess Jill Dragomir are in hiding at a human boarding school in the sunny, glamorous world of Palm Springs, California. The students - children of the wealthy and powerful - carry on with their lives in blissful ignorance, while Sydney, Jill, Eddie, and Adrian must do everything in their power to keep their secret safe. But with forbidden romances, unexpected spirit bonds, and the threat of Strigoi moving ever closer, hiding the truth is harder than anyone thought.

Populated with new faces as well as familiar ones, Richelle Mead's breathtaking Bloodlines series explores all the friendship, romance, battles, and betrayals that made the number-one New York Times best-selling Vampire Academy series so addictive. In this second book, the drama is hotter, the romances are steamier, and the stakes are even higher.

I’d been waiting for ages for The Golden Lily to come out, so when it finally did, I downloaded it immediately! Again, Richelle Mead has failed to disappoint me. There are more character developments, more drama, more romance and more intrigue in this book. I couldn’t be more happy with how the story turned out!

In The Golden Lily, Sydney still makes decisions based on what she believes is right, but now she is beginning to open up and so we get to see another side of her. Sydney is extremely intelligent, but her innocence in certain areas makes me want to smile at her indulgently. Adrian Ivashkov is simply the most endearing character ever created by Richelle! I love his fierce loyalty and smart-ass comments. He keeps surprising me and I’m so glad he has a much larger part in this book than in Bloodlines.

I’m obsessed with this series and I wouldn’t change a thing about it!
Now, who is up for the next book, The Indigo Spell?

This is – hands down – my new favorite book of 2012! My only complaint about Golden Lily is that it caused me to lose sleep. I finished this book in one day…and what an emotional day that was!

Normally I would write a little synopsis of the book, but not this time. Richelle Mead’s work speaks for itself. If you’re considering this book, chances are, you’ve probably not only read Bloodlines, but also the entire Vampire Academy series; if you haven’t…then welcome to the Richelle Mead fan club. With that said I’m just going to write a few little tidbits about some of the character development within this second installment of the Bloodlines series.

Richelle Mead leads us back to Palm Springs and back into the lives of Jill, Eddie, Sydney, Adrian, and Angeline. We also see more appearances from Dmitri (and his duster) and Sonya Karp than we did in Bloodlines.

Sydney goes through a lot of personal and emotional growth in this sequel. She not only learns more about the real history of Alchemists, but she also starts to realize that she has more loyalty and tolerance for the Moroi and Dhampir races…and that scares her because she doesn’t want that secret to get back to the Alchemists because they would send her to the re-education center (which she is terrified of). The prejudice that her upbringing taught her (both from her father and the Alchemists) is very hard for her to overcome and she battles with it every day. The decisions that she makes along her journey in this book will make you…. (Nope, not going to give spoilers, it’s MUCH better to not know what’s going to happen – trust me, it will be worth the wait.)

And let us not forget about the sexy, and ever-inebriated, Adrian. For anyone who fell in love with Adrian during the Vampire Academy series (or even if you just discovered him in Bloodlines), be prepared to completely swoon over him yet again. We’ve all adored this sexy man who seems like he’s in a constant battle with his mental health (thanks to his spirit magic), but in this book Adrian takes it to an all new level. I won’t give more details and spoil the plots twists & turns, but just know that hiding his feelings behind his sardonic quips and his constant smoking and drinking just isn’t going to cut it this time.

Also, the narrator, Emily Shaffer does (yet again) a wonderful job with this book. When dealing with a narrator working on a book series, I find that sometimes the characters don’t sound that same from book to book - Shaffer does not have that problem, she gave a seamless performance of all the character’s voices. Her talent for accents and having multiple characters that sound VERY different from one another is astounding.

Buy Golden Lily and get lost in between the pages. I will definitely be enjoying this book a couple more times before Bloodlines #3: The Indigo Spell comes out on February 12, 2013!!!

Audio Rating: 3.25 (Not part of the overall rating)

First thought when finished: UGHHHHHHHHHHHHHHH! (though very true to character)

What I Loved: I am just going to say it: I love that Richelle Mead knows her characters so well that she can make me scream at them while simultaneously knowing that they are doing exactly what they would do if they were real. That doesn't make some of the moments in The Golden Lily easier to read but it does make me love the characters that much more for it. I love Sydney and have since she was introduced in the VA series. She is complicated, smart, and quite frankly is adjusting as well as she can considering her world, thoughts, beliefs, and skills are tested almost daily. I find Sydney to be a delight to read.

What I Liked: I think Jill is a likable character but I was glad to see less of her in this book. I have a feeling that she will be like her sister was in VA--someone who just never quite grows on me. However, can I say how much I enjoyed Ms. Redneck! Seriously, that girl is showing some spunk. I feel sorry for her that she is probably the third wheel in the Eddie/Jill triangle but hopefully she either gets her own love interest or Eddie realizes what a spitfire she really is (and not just in a filler type of way)!

What made me go huh?: Is Adrian ever going to catch a break? The guy is pretty much the emotional punching bag of both series so far!

Audio Review: The Golden Lily was narrated by Emily Shaffer and ran 12 hrs and 14 mins. Overall Emily did a decent job with the story. The reading pace was a little off. It seemed like she was rushing the words at times. Her Adrian voice really grated on my nerves and that was probably my biggest turn off with this audio. However, I thought that she did an excellent job with Sydney's voice. She was also pretty spot-on with the rest of the characters. I think some people will like this audio more than I did.

This series keeps progressing well and Syndey is learning that she is so much more than her job with a surprising outcome.

Research on kissing and hand holding

Once again I can't say any thing bad about his book or the series. It is actually kind of annoying. I would like to give some sort of critique but can't because the book was so good. Others may disagree with me but would be wrong.

Sydney has to deal with so many things in book that I almost feel bad for her but, then I realize that she gets to spend time with a guy like Adrian and I don't feel so bad for her.Not that having to deal with potential crazy vampire hunters isn't worthy of some sympathy it diminishes when I read just how much time she spends with Adrian.

I normally don't give away spoilers in really good books like this one but I will say this the best part of the book was when Sydney was all confused about kissing and she made some comment that went something like this, "The books I've read on dating have mostly advised on when to have sex which is useless because I'm still trying to figure out when to hold hands." I just found that to be very typical Sydney needing to read and do research to figure out a relationship.

Yes, because this is just something that I could not stop listening to!!

Well... pretty much the whole 2nd half of the book.

Yes the end...I ended up crying a little

What did you love best about The Golden Lily?

Sydney seems to start realizing her feelings for Adrian

What other book might you compare The Golden Lily to and why?

One of a Kind!

Which character – as performed by Emily Shaffer – was your favorite?

I am beginning to like the story of Sydney better than that of Rose in the Vampire Academy series. I thought this book was better than the first and I am looking forward for the additional books in this series. The character development is getting better and better! You will love this book if you liked Bloodlines.

Can't listen due to performance

Would you be willing to try another one of Emily Shaffer’s performances?

No I would not she slows the story down and sounds like a child I am unable to listen to this book to be honest.

Even Better Than Bloodlines!

The story starts off where Bloodlines ended. There is a lot more Adrian, which I LOVED! He is finally getting over Rose, FINALLY, and the romance really starts to heat up between him and Sydney, especially at the very end! I disagree with some critics who say that Sydney is not nearly as strong a main character than her predecessor, Rose. Sydney proves that brains, beauty,and strength can work together quite perfectly in the character of a heroine! The ending is definitely a cliff hanger, leaving us wondering how this forbidden romance can ever work. I am just sad that I have to wait until February to find out what happens next!