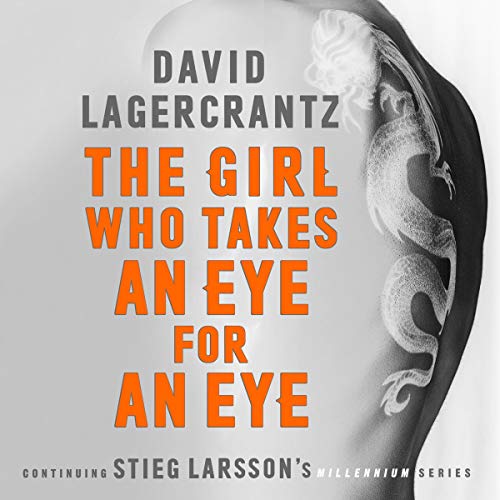 The Girl Who Takes an Eye for an Eye

The girl with the dragon tattoo is not given to forgiveness.

Lisbeth Salander has been forged by a brutal childhood and horrific abuse. And repeated attempts on her life.

The ink embedded in her skin is a constant reminder of her pledge to fight against the injustice she finds on every side.

Confinement to the secure unit of a women's prison is intended as a punishment. Instead, Lisbeth finds herself in relative safety. Flodberga is a failing prison, effectively controlled by the inmates, and for a computer hacker of her exceptional gifts there are no boundaries.

Mikael Blomkvist makes the long trip to visit every week - and receives a lead to follow for his pains, one that could provide an important exposé for Millennium: Salander tells him to check out Leo Mannheimer, a seemingly reputable stockbroker from Stockholm, somehow connected to the long-ago death of a child psychologist - and to the psychiatric unit where Lisbeth was an involuntary patient as a child.

Lisbeth knows she is coming closer to solving the mysteries of her early life, and even within the confines of the prison, she feels the deadly influence exerted by her twin sister. She cannot stand by as racial and religious conflicts run unchecked amongst the community around her, manipulated by criminal forces far beyond the prison walls.

Salander will stand up for what she believes in. She will find out the truth. Whatever the cost...

The tension, power and unstoppable force of The Girl Who Takes an Eye for an Eye are inspired by Stieg Larsson's Millennium trilogy, as Salander and Blomkvist continue the fight for justice that has thrilled millions of readers across the world.

Translated from the Swedish by George Goulding.

"Lagercrantz has more than met the challenge. Larsson's brainchildren are in good hands." ( Wall Street Journal)
"Lagercrantz pulls it off, and with a great deal of style." ( Observer)
"Salander and Blomkvist are just as compelling as ever." ( New York Times)

A pity about the performance

Doesn't quite hit the mark

The plot had promise but it just is too convenient with just in time saves. The author should have spent more time developing the characters rather than just chasing sensational situations.
Pitty.

This is the fifth book in the Millenium series. Lisbeth fights by any means necessary to find out the truth about her past, using the help of Mikael.

I struggled to follow the plot at first. When I figured it out, and although it was ultimately an interesting story about the twin project, it was, in my opinion, not written well and did not capture nor maintain my attention. I had periods of listening that I just wandered off as I was lost, bored, and did not feel any sort of connection to the story or characters. I want to finish the series, just to know what happens, but I am struggling to find the will…

Why do I do this to myself?

I know it's not going to be anything like Millennium trilogy... Oh, did anybody wonder why he called it a trilogy?

David Lagercrantz does an excellent job of continu

David Lagercrantz does an excellent job of continuing the Steig Larsen trilogy and securing a place in my top tier of writers. Narrated by one of the all time best narrators Saul Reichlin what could be better? How much more punishment can Lisbeth Salander take? Look forward to the next one.

I have enjoyed the dragon tattoo series but couldn’t finish this one. There was too much mundane detail and not enough interaction of the characters we’ve come to love

lacks a bit of the darkness of its predecessors

lacks a bit of the darkness of its predecessors but worth a listen. i will be getting the next one.

I almost abandoned the book because of the poop performance

I love the millennium series and I was so eager to finally get to listen to the book. I got so disappointed with the horrible performance of the reader. He pronounces all the names differently, his diction and timing is really off. I struggled to listen to the book and almost dropped it altogether.

Very enjoyable from a good author

At first I was hesitant to listen to this book. I didn't enjoy the previous book as much as I'd hoped. I'm glad that I did, because in contrast to the previous book, where, at times, the characters was so exaggerated they almost seemed like parodies of Larssons characters, in this they are great. The dialogue between them is good, and the book has a nice flow. The story is intricate and very well written and thought out. We finally get to know the reason for Salanders dragon tattoo, and learn more about her past. The book springs into action at once, unlike the previous book where it took some time before something really happened.

One has to remember that this is a different author than the first three books, so of course the writing style and flow will be different. Lagercrantz does a great job and makes the characters his own, which in itself is no easy feat considering the mastery of Stieg Larsson. I really enjoyed this book.

As with the previous books in the series: Saul Reichlin does an amazing job as the narrator.

This book is a real disappointment, feels like it has been written for a movie script and the book is an afterthought. I really liked David's first book of the Millennium series but this was really hard work to get to the end...

I thought many times that I would not be able to finish this book. Apart from the characters it has nothing in common eith the original series. And while Saul can put forward a good voice - as soon as he tries to vary it for different characters they end up sounding like imbeciles. I will not buy any prospective follow on books and wish I had not fallen for this one.

The story does not keep up with the previous one. It is rather bloodlees. Not all, but large parts of the book just explain the past of the involved persons to the point of exhaustion. The whole story appears rather constructed. The main plot is hardly moved forward. The action parts are not plausible at all. I really like the character, however, in parts superwoman Salander is described ridiculously incredible.

Good storytelling and suspense. Never boring and very atmospheric. A bit too calculated (tear jerky) in places but plausible and interesting.

A New Lisbeth Salander is Emerging

With „The Girl Who Takes an Eye for an Eye” David Lagercrantz gives the story a new direction. This started already with “The Girl in the Spider’s Web”, but it is more distinct now. While Lisbeth Salander was the predominant figure in Stieg Larsson’s Millenium trilogy and her bizarre and nevertheless alluring character made us fall in love with her, she moved backstage in Lagercrantz’s new novel and seems to have grown up and behave more reasonably. This is probably the main reason, why some of the magic of the previous novels got lost. While the prose is still at par with Larrson’s writing, the storyline and plot are somewhat unrealistic and appear to be construed. Regardless of that, the topics of the story are valid and contemporary, the problems of fundamentalist Islam and exposure of the financial markets to computer attacks, but perhaps, there is too much of everything in one novel.

Lisbeth Salander tries to get some final answers as far as her childhood is concerned. While she sits in a high security female prison, she asks some old friends for help in her research. Of course she did not expect to set an avalanche of events and disasters into motion. Unknowingly she endangered her life and the life of her best friends by unraveling step by step the misdeeds of a sinister, pseudoscientific group, known as The Registry. As if this would not be enough, helping and protecting a young Bengali woman will lead to a confrontation with a brutal prison gang and violent Islamists.

There is enough action and it is nice to meet old friends again, but this novel does not have the quality of the first three.

Another perfect follow-up of the previous Millennium series, David Lagercrantz has yet again proven to be Stieg Larsson’s worthy heir. Seldom has switching between story and time lines been so easy to follow; there certainly is no better narrator than Saul Reichlin to give nuanced life to all different characters. I’ll be impatiently longing for the next audiobook echoing the footsteps of Kalle F*** Blomquist, the girl with the dragon tattoo and all their allies!