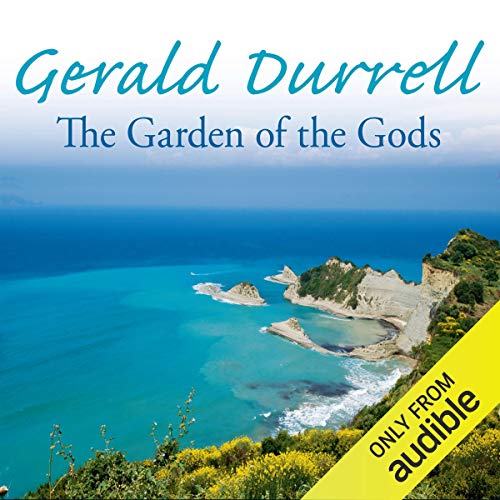 The Garden of the Gods

The enchanted island of Corfu was home to Gerald Durrell and his family for five years before the Second World War. For the passionate young zoologist, Corfu was a natural paradise, teeming with strange birds and beasts that he could collect watch and care for. But life was not without its problems - Gerald’s family often objected to his animal-collecting activities, especially when the beasts wound up in the family’s villa or even worse - the fridge.

I love these books and this book is no disappointment except for the audio performance by Christopher Timothy. I have the James Herriot books that are narrated by Timothy, and Timothy does an excellent job narrating those books. However, I think he does a bad job on this book. Maybe if I hadn't grown so used to hearing Nigel Davenport narrate these books I wouldn't have been so disappointed. Timothy talks way too fast and in some places I can't even understand what he said. His inflections are not nearly as good as Davenports, either. All in all, I am very disappointed in the audio performance of this book.

What made the experience of listening to The Garden of the Gods the most enjoyable?

The witty and brightly-natured 'British' characters contributed to the light-hearted and entertaining stories of their new life as a family in Corfu. Each chapter depicts a fascinating interaction between the family, visitors from far reaches and the local inhabitants.

What was one of the most memorable moments of The Garden of the Gods?

The family party complete with vaudevillian acts for their own entertainment!

He displays a wealth of character portrayals which seem so accurate. His reading shows a great sense of timing which is necessary maximise the author's humour.

Oh yes it made me laugh at the situational humour and the 'one-liners' that abound.

The fun of this book was heightened by clever descriptive language which suits our characters so well.

Can't wait for the final instalment of the Cofru trilogy!!
The book is advertised as being read by Nigel Davenport, but the download gave me a recording of it by Christopher Timothy. He is still a wonderful reader of the story, but it may be a little surprising when you first begin the story if you're expecting to hear Davenport's voice.
Certainly not a problem overall and I highly recommend this series.

Why change the narrator?

Where does The Garden of the Gods rank among all the audiobooks you’ve listened to so far?

I loved the book. The narrator was just ok. He paused at awkward moments, and didn't seem to know how to pronounce certain words.
I sorely missed the previous narrator of these books.

What other book might you compare The Garden of the Gods to and why?

Can't think of any. I loved the off-beat characters and the descriptions of everything happening at once. Very skillfully written.

Unnatural pauses in phrasing, like he wasn't really paying attention, or didn't understand the gist of the sentence.

Durrell's got a group of wonderful eccentric characters and a family with a dynamic that will make you think your family is sane and forgive your big brother for practicing wrestling holds on you or cheating at Monopoly. He'll also make you want to visit Corfu. I'm not sure that he'll convince you to be a naturalist - it's fun to hear about the animals and the adventures, but I wouldn't want to deal with the messes, the need to get food for carnivores, etc., etc,, and I hope he won't convince you to capture so many animals rather than to leave them in their natural habitat. Durrell's writing is a pleasure, as is Christopher Timothy's narration, though I did like Nigel Davenport's narration of the previous volume better.

Would you listen to The Garden of the Gods again? Why?

I listened to The Garden of the Gods after Durrell's other two books about his family's adventures on Corfu. I could easily and happily just start over from the beginning today, and I am not much for re-reading, or re-listening to, books I have already experienced. Durrell's descriptions are clever and poignant, his characters vivid, and his stories are charming. It is quite simply fun to read stories that make you laugh out loud.

Which character – as performed by Christopher Timothy – was your favorite?

Mrs. Durrell, of course. Her lines are best, and somehow, her femininity is not lost by the male narrator.

This book, along with the other two in the trilogy are the perfect escape.

Great Ending to a Quirky Trilogy

This was my favorite of the trilogy - I rushed to finish, dying of laughter as I did, even laughing out loud with my headphones in at the coffee shop this morning. The Durrell's adventures and misadventures on Corfu were interesting to say the least. Gerald was a kid who loved animals. His older brothers and sister were always inviting an assortment of people to visit. The mother was often at a loss to control the madness. The locals and Gerald's tutors were all unique individuals. You can read or listen to this whether or not you've seen "The Durrels on Corfu" by the BBC. I've seen a couple of episodes and it focuses a little more on the mother than the books.

I was disappointed at first that it was a different narrator than the first 2 books, but after a bit found him to be fantastic. He got everything just right.

I highly recommend all 3 of the trilogy in order.

Such a delightful and colorful storyteller. I laughed so many times! The narrator was excellent. I Highly recommend this book.

A revelatory combination of the awe of life that surrounds us and the human comedy within which we experience it. I laughed out loud and learned and grew and added Gerald Durrell to my heroes list.

The garden of the gods

I thought I'd read everything Gerry Durrell had written but these are new. His family was so entertaining anti I doubt his mum intended that. Love Creech , Spiro, Theo and the rest