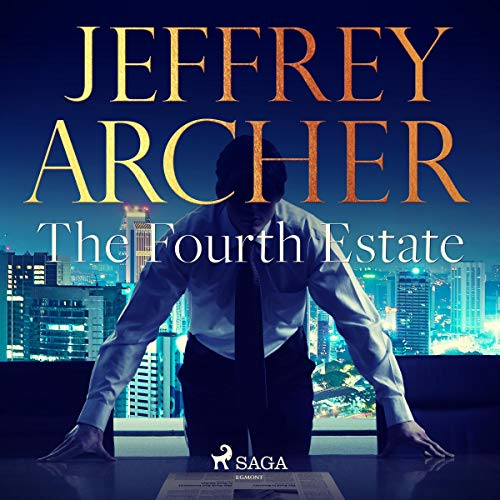 Lubji Hoch escapes from the Nazis, moves to Berlin and changes his name to Richard Armitage. After a successful career in the British Army, he takes over a struggling newspaper and with unrivalled ruthlessness begins building his media empire.

Meanwhile, Keith Townsend, the son of a millionaire and Oxford educated, returns to Australia from London to take over his father's newspaper with similar ambitions.

As both men move their quest for power to the world stage, they realise they are more than a match for one another's brilliance and ambition. Their rivalry leads them to the brink of financial ruin and finally to the ultimate showdown where one will become the world’s most powerful man, and the other will succumb to tragedy.

Based on the rivalry between media moguls Rupert Murdoch and Robert Maxwell, this fast-paced, suspenseful thriller full of status, corruption and deceit will captivate fans of Archer's blockbuster Kane and Abel.

The Fourth Estate is narrated by Jonathan Aris, a British television, film and theatre actor. He has appeared in Sherlock, the Night Manager alongside Tom Hiddleston and Hugh Laurie, and played the angelic quartermaster in Good Omens.

Jeffrey Archer is a bestselling British author and former politician. He was educated at Oxford and went on to become a Member of Parliament, the deputy chair of the Conservative Party as well as sitting in the House of Lords. His political career ended in scandal and he turned to writing, where he has been published in over 250 countries.

He is perhaps most famous for the "Clifton Chronicles" and his blockbuster Kane and Abel which was number one on the New York Times Bestseller list and inspired a popular miniseries starring Peter Strauss and Sam Neill.

After he was imprisoned for perjury in 2001, he wrote his highly acclaimed non-fiction series, Prison Diaries - Hell, Purgatory and Heaven - which were inspired by his experiences and loosely structured around Dante’s Inferno.

I’ve read many books by Jeffrey Archer and I have to say I was very sad this one didn’t stack up against his previous works. It’s a long book, 19 hours and I made it 10 hours before I could stand it no longer.

The story is convoluted, difficult to follow and just not interesting. The narrator does a good job, but I’m sad to say it just wasn’t enough to coerce me into staying the entire way though.

I lost entirely too much sleep

I often use audiobooks as “bedtime stories,” listening to them in the dark, winding down from the day, with the sleep timer set so it the recording won’t continue for too long after I drift off to sleep. Occasionally, I will listen for about an hour before falling asleep and will have reset the sleep timer for “end of chapter” more than once (sort of the opposite of the snooze alarm!)

I have reset the sleep timer multiple, multiple times for two nights in a row. I simply couldn’t get to sleep while the book was still playing—it was THAT engaging.

I start to finish, i enjoed the book. Great story spanning six decades all over the world.
And I loved the ending!

The book could have been half the length and had the same effect. The story repeated the same theme over and over again.

I am a fan of Jeffrey Archer for many years. This story was bery entertaining. Enjoyed the historical reference.

Amazing story, well told 👏 👌 Much to learn from these rivered masterminds colliding

Kia most interesting piece no of historical fiction

This was very good as long as I kept reminding myself who was Murdoch and who wa Maxwell. But so long as this was clear it was a wonderful example of Sir Jeffrey’s talents as a storyteller

I love Jeffrey Archer - but this is not his best work. The storyline is repetitive and failed to keep my interest as his other books have.

The most boring Jeffrey Archer!

This is the most boring Jeffrey Archer I have ever read. The summary would take two sentences: two men build up media empires while always trying to outdo each other. Both become multimillionaires until they overstretch themselves and one commits suicide the other one might be saved.

not the best Story I've heard, but mit bad either. I got lost sometimes between Arsmstrong and Townsend ..