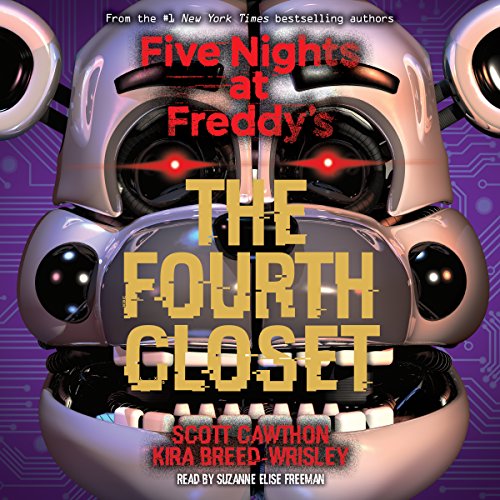 From the creator of the acclaimed horror video games comes the next thrilling chapter in the New York Times best-selling Five Nights at Freddy's series.

What really happened to Charlie? It's the question that John can't seem to shake, along with the nightmares of Charlie's apparent death and miraculous reappearance. John just wants to forget the whole terrifying saga of Freddy Fazbear's Pizza, but the past isn't so easily buried.

Meanwhile, there's a new animatronic pizzeria opening in Hurricane, along with a new rash of kidnappings that feel all too familiar. Bound together by their childhood loss, John reluctantly teams up with Jessica, Marla, and Carlton to solve the case and find the missing children. Along the way, they'll unravel the twisted mystery of what really happened to Charlie, and the haunting legacy of her father's creations.

I would give more stars if possible.

I waited for almost a year for this book to be released and I have to say it was worth the wait. while everything I knew about FNAF was altered by this book, I will say that it does make sense. if you are interested in this book, I suggest you give it a listen. It is amazing.

this was easy to listen to and follow along with. narrator is easy to understand and portrays each character very well. story was great!

So I've read the silver eyes and twisted ones this answers the cliff hanger from twisted ones. The story of having an imitation charlie is fun and thrilling. i sort of expect their to be another book because the ending was once again left on a cliff hanger. I'm assuming what john found in the closet was charlie so that would finish the series but they've made it so vague that I'm not sure. So many questions though.

narratos is the best thank you, suzanne elize freeman i love you and those books

THERE HAS TO BE A 4TH BOOK

If you havent bought any of the books, just buy the first one. Thisn doesn't answer many questions. Unless there comes 4th book to end it in a real way this one is a waste of money.

Good wrap up. Some parts better than others.

The narrator did an amazing job per usual. I like how the book gave an alternate explanation on some of the lore. Though, some of it seemed to contradict what was in earlier books. Definitely should watch some gameplay since some of it ties in/together. Not bad.

unenjoyable performance. cringe worthy narrative. agonizingly slow paced. these books have never been great but this is by far the worst. going back to horus heresy.

Never expected Charlie to be animatronic at the end. That mean John was in love with a robot

No brainier for a Five Nights at Freddy's fan. Lots of lore here compared to the games.