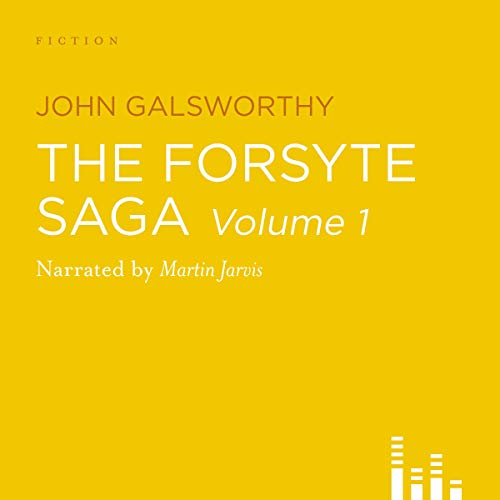 Soames Forsyte's great desire to own things even extends to his captivating wife, Irene. Jealous of her friendships with others, he concocts a plan to move her away to the countryside, where he might come to own her completely. Resisting his bitter intentions, she falls for architect Philip Bossiney, who is unfortunately engaged to her best friend (and Soames' cousin), June Forsyte.

A gripping drama, CSA Word's 'The Man of Property', the first book of 'The Forsyte Saga', is an absorbing audio production that faithfully and movingly serves Galsworthy's masterful prose. Also includes the much-acclaimed 'Indian Summer of a Forsyte'.

I am a Galsworthy Groupie!

If you could sum up The Forsyte Saga - Volume 1 in three words, what would they be?

I first read The Forsyte Saga in 1967, the year of the release of the original black and white British TV series. Since then, I have read the entire 9 book saga at least once a decade, as to me it embodies not just a time that is now almost beyond the memory of living persons, but speaks to emotions that drive people even today. In this work we have obsession (both monetary and sexual), loyalty, finding one's way in the world, sacrifice, politics, war, in other words it deals with things that we still deal with in the 21st century.

What does Martin Jarvis bring to the story that you wouldn’t experience if you just read the book?

Martin Jarvis is one of the few surviving members of the original 1967 television cast. I think as such he brings a depth of understanding to the characters that other narrators may lack. At first I was a little put off by the somewhat "plummy" tones of Mr Jarvis, but as I continued to listen I realized he was very much duplicating the attitude of many members of the Forstye clan. It can be tricky for a man to duplicate the dialog of a woman -- I felt he did an excellent job with the straight forward character of June Forsyte, but was a little less successful with the more ethereal character of Irene.

I am looking forward to purchasing the other Audible recordings of Galsworthy's masterpiece.