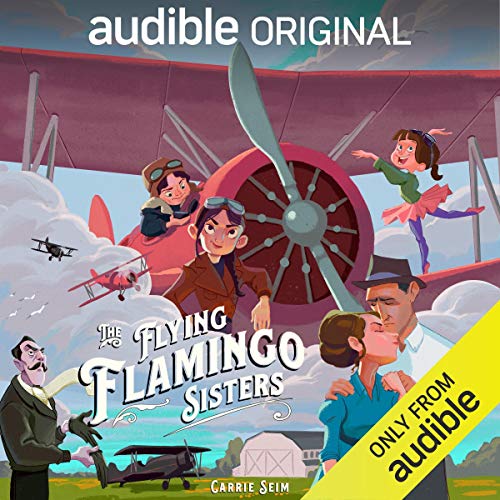 Romper's top choice for "Best Audiobooks for the Whole Family"

This hilarious, heartfelt, and soaring adventure will delight fans of The Goonies and Indiana Jones. Performed as a 1930s radio drama, it’s bursting with humor for all ages, orchestral scoring, and some of the most talented voices on Broadway.

When their ace pilot parents (and adorable puppy) mysteriously disappear over the Pacific, the Flamingo Sisters - Flo, Faye, and Franny - escape the clutches of their evil Uncle Freidrich (who believes girls should never pilot aeroplanes) and join a flying circus. They soon become a smashing sensation, performing aerial acrobatics, wing walking, and other death-defying feats in a dazzling biplane outfitted with three cockpits.

But when the girls discover a mysterious map - which may lead them to the long-lost Flamingo family fortune - their dastardly uncle follows them on a thrilling chase in the skies. The Flying Flamingo Sisters must use wits, courage and derring - do to solve secret codes, trek through spooky jungles, and save their parents. Not to mention themselves!

I downloaded this on a lark for my nieces to listen to while they were visiting and ended up really enjoying it myself right along with them. The story is exciting and tightly paced as the three young protagonists find themselves leapfrogging across the depression era United States in a three person biplane. The narrative has something for everyone: action, adventure, exotic historical settings, aerobatic derring-do, cute puppies, cool planes, mysterious puzzles, dastardly villains, perilous situations, buried treasure and strong and smart girls front and center for the whole story. We all found the format, which felt like a call back to a War of the Worlds-style radio drama, to be highly entertaining. The voice actors were all excellent and the kids really got a kick out the sound effects which amped up the drama and enjoyment considerably. My nieces (aged 8, 10 and 12) loved the story of girls taking their destiny into their own hands...such fun. At two hours it was the perfect length for a long car ride without requiring a huge time commitment. Was something new and completely different and I would recommend for all kids but was a particular home run with my tween nieces (they are listening to it again in the family room). Awesome job.

MY DAUGHTER IS OBSESSED WITH THE FLYING FLAMINGO SISTERS!!!!!

FOUR. That's the number of times my 6-year-old has listened to The Flying Flamingo Sisters. So far. SHE LOOOOOOOOVES IT!!!!! IT'S SO FREAKING BRILLIANT!!!!!!! She asks me every day when the next installment is coming out and where we can watch the movie. No pressure, but you have a MEGA FAN in my house! Folks, I dare you to find a better, more fun, more exciting adventure for your little ones than this! Thank you so much for making this!!!!!

For young and old, aviators and non-aviators

Where to begin! As a private pilot, I thoroughly enjoyed The Flying Flamingo Sisters and found it very relatable to young and old, aviators and non-aviators. Classic storytelling sprinkled with bits of aviation jargon, adventure and comedy. In an age when female aviators are becoming more prominent in the aviation industry, this book is sure to capture those who gaze with their eyes skyward and inspire future generations to take wing

Great for a road trip!

Very adventurous, a little bit scary and overall a really fun story to listen to. Our whole family loved it.

An adorable little adventure! The writing was witty, and it was extremely well produced. The story hosted a charming cast, and all the performances were beautiful. I loved every minute.

What a fun story! The writing is exceptional and I especially enjoyed the use of alliteration throughout the story. The repeated use of phrases like “exceptionally strong arms” and aviation terms like “severe clear.” I also liked the explanations of terms that youngsters might not know, done in the novel form of a “bulletin.” Good book for adults and youngsters alike! The voices were wonderful and enhanced the story so well. Holy guacamole, that was good!

This is SUCH a fun romp, with great acting, terrific writing, and a cliffhanger ending that leaves me ready for the next one! If I had a fireplace, I'd be sitting in front of it with my nieces and nephews, like an old-timey radio hour. What a delight!

The characters come to life and are easily imagined. The author did an incredible job of keeping the action fun and smart. Never a dull moment!!! Would highly recommend this to anyone wanting a fun listen!

I’m the first dissenter I guess

I know it’s for children, my kids download stuff all the time but this was just ... the most predictable stuff ever... I was narrating it before it was happening. It’s more cliche then a disney movie. Even for young listeners ... be original. Jeez.

My kids loved it!

This was an excellent audiobook for our drive to school. Action, suspense, and lovable characters, this book had elements that both my 9 year old girl and 5 year old boy loved.