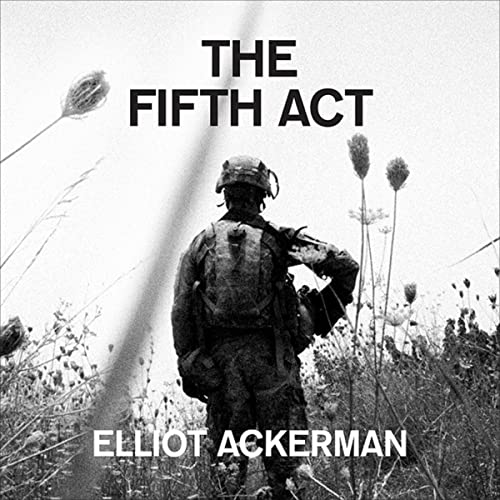 How and why did American involvement in Afghanistan end in tragedy?

Elliot Ackerman left the American military ten years ago, but his time in Afghanistan and Iraq with the Marines and, later, as a CIA paramilitary officer marked him indelibly. When the Taliban began to close in on Kabul in August of 2021 and the Afghan regime began its death spiral, he found himself pulled back into the conflict. Afghan nationals who had, for years, worked closely with the American military and intelligence communities now faced brutal reprisal and sought frantically to flee the country with their families. The official US government evacuation process was a bureaucratic failure that led to a humanitarian catastrophe.

The Fifth Act is an astonishing human document that brings the weight of twenty years of war to bear on a single week at its bitter end. Using the dramatic rescue efforts in Kabul as his lattice, Ackerman weaves in a personal history of the war's long progress, beginning with the initial invasion in the months after 9/11. It is a play in five acts, the fifth act being the story’s tragic denouement, a prelude to Afghanistan's dark future. Any listener who wants to understand what went wrong with the war’s trajectory will find a trenchant accounting here. And yet The Fifth Act is not an exercise in finger-pointing: it brings listeners into close contact with a remarkable group of characters, American and Afghan, who fought the war with courage and dedication, in good faith and at great personal cost. Understanding combatants’ experiences and sacrifices while reckoning with the complex bottom line of the post-9/11 wars is not an easy balance; it demands reservoirs of wisdom and the gifts of an extraordinary storyteller. It asks for an author willing to grapple with certain hard-earned truths. In Elliot Ackerman, this story has found that author. The Fifth Act is a first draft of history that feels like a timeless classic.

"The American betrayal of Afghanistan took twenty years. Elliot Ackerman, a participant and witness, tells the story with unsparing honesty in this intensely personal chronicle." (George Packer, author of The Unwinding and Last Best Hope)

"His understanding of war is so profound that one feels like secrets have been revealed—truths—information that one day may be necessary for our survival." (Sebastian Junger, author of War and Tribe)

"Making sense of chaos is never easy, but this powerful book does much to explain why America’s debacle in Afghanistan ended the way it did … Courage and folly, dedication and tragedy: Ackerman deftly captures all dimensions of a protracted foreign policy failure … A must-read account of the end of America’s longest war." (Kirkus Reviews)

A lot to think about

I expected to find a personal recollection of the withdrawal from Afghanistan. In some instances, my expectations were exceeded: the author's reflections on modern wars that can't be won and his comparison of Vietnam war with Afghanistan leave a lot to think about. However, the factual, personal part concerning Afghanistan war contains confusing jumps in time, from 2001 to 2021. Recollections are the most memorable events of the author's 20 years in military: first as an infantryman, then in Marine corps, then in CIA. The withdrawal itself happened after the author left active duty, but through hia connections, he took part in exfiltration of American allies from Kabul.