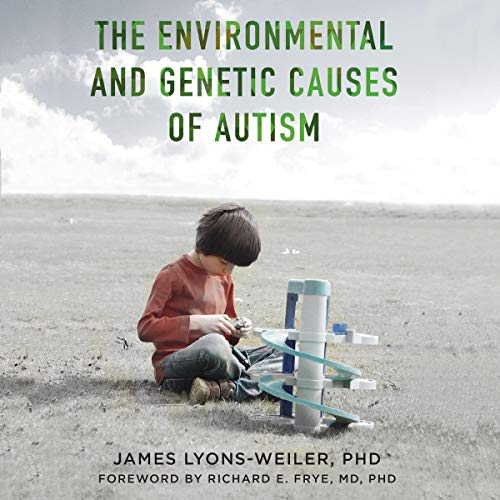 The Environmental and Genetic Causes of Autism

The Environmental and Genetic Causes of Autism delves deep into the full body of past and current research to reveal how genetic predispositions and environmental factors can combine to produce the conditions autism and autism spectrum disorders (ASD).

To make this groundbreaking audiobook, Dr. James Lyons-Weiler combed through the past fifty years of published research on autism, exploring subjects such as genetic variation, mechanisms of neurotoxicity of metals and pesticides, and the central and combined roles of each in causing autism.

Lyons-Weiler provides a major overview of all aspects of the condition of autism, reviews changes in diagnoses and treatments, and explains how genetic information can be used to tailor effective treatments, and sometimes reversals, of the symptoms. He also presents practical forward-looking suggestions on how to design future studies to facilitate the discovery of biomarkers for autism risk and how to classify the full range of autism spectrum disorders.

Autism is considered one of the most mystifying conditions of our day, and alarmed scientists, doctors, politicians, and parents are desperately trying to understand why the condition is escalating. According to the CDC, rates in the United States have risen from an estimated one in two thousand children in 1980, to one in 68 in 2012, and a new National Health Interview Survey shows a rate of one in 45. By the time you listen to this book, that number may have changed yet again.

While most autism researchers focus on either environmental or genetic causes of autism, Lyons-Weiler's opus demonstrates that to fully understand the condition and to finally put its rate on the decrease, it is essential to pay attention to the science showing how the two classes of factors interact.

The more you see, the less you realize science understands, or cares to

Exhaustive comparison of multiple possible connections related to autism. It would take a photographic memory to remember all discussed here. Big picture I got: multiple factors involved with ASD. To say autism is purely genetic is ignorant, yet here we are as a society. Recommended reading for all. Although it is dizzying to listen at times to all the factors, it is necessary to see how little we understand, or society cares to understand about autism.

The first several chapters of the book revolve around the premise that vaccines are bad they contribute to autism and FDC is mismanaging vaccines. If I’d known this book is about making the cases against vaccines, I would not have bought it. I really wanted to know about the wider topic of the relationship between environment, genetics and Autism Spectrum Disorder. I will continue skipping chapters until I get to one that does not talk about vaccines.